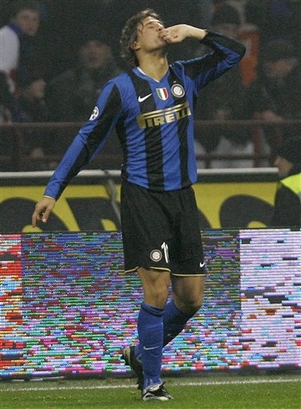 Man oh man, but this was a game. Really, after we went down 0-2 in the first half, I thought this was going to be Atalanta all over again. And, for a while - a really long, gut-wrenching while - it was. But then, after some tinkering at the half, Inter came out swinging and Balotelli put us back into the game. Even after we go down two goals again, we didn't stop pushing. Finally, after a converted penalty brings us within spitting distance of a draw, Crespo comes on and two minutes later heads in the equalizer. His first goal of the season and the whole stadium goes ballistic. Didn't I say there would be goals?!?

After the match, an emotional Crespo had this to say:

"There was a bit of everything in this goal: a bit of anger, a bit of letting off steam, a bit of pride. This goal is no coincidence, but the consequence of my efforts to keep myself alive. My team knows that it can count on me completely. I will always give my all and I will be ready every time they need me"

I so wanted this for Crespo. He has been a rock, training, hoping, waiting... He has shown so much heart - he deserves to be the hero of the match.

Much like the Champions League game, this was a match of two halves. Roma went up early on what, it must be said, was a great goal by De Rossi. On our part, it was a huge brain fart by Nico and Santon. Then, after some strange (and very unusual) bumbling between Maicon and Julio Cesar, Riise slotted home Roma's second. 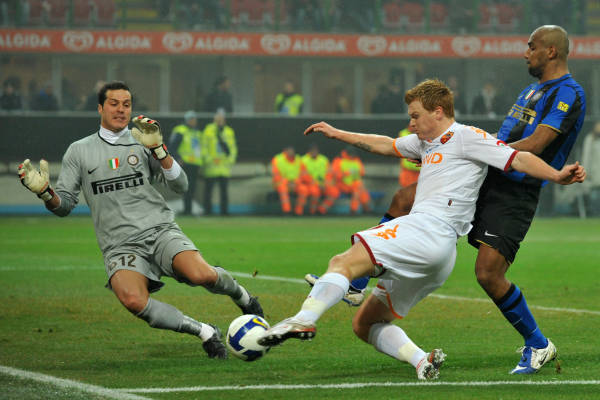 Why oh why did Riise have to get his first Serie A goal against Inter?!?

This game saw the return of Panucci to the Roma fold and he played for all he was worth. This first half saw more than one tussle for the ball between the defender and Adriano. True, Adriano failed to score, but at least he was trying. Balotelli was almost nonexistent in that first half. 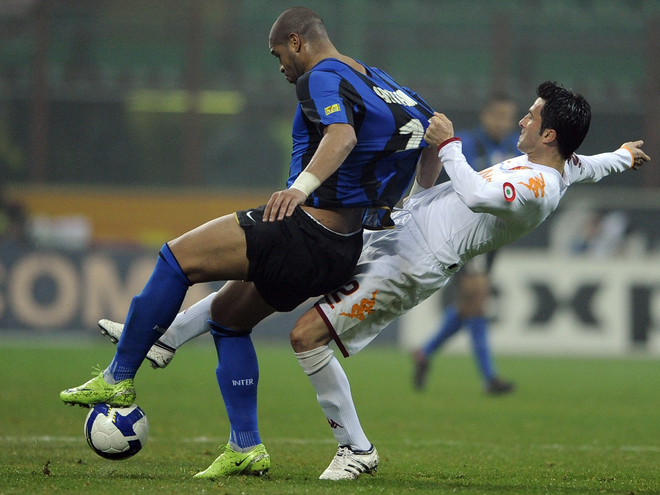 Panucci can't even wait until the break to swap shirts with Adriano. He wants it NOW.

I don't know what happened at the break, but it was a different team that came out. According to Stankovic, the horrible performance we saw on the pitch that first half was because of residual tension from the CL tie. As for what happened in the interval, he said:

"During the interval we told ourselves that we had to show we are a great team. We looked each other in the eyes and took off."

For the second half, Nico and Maxi came out, Cambiasso pushed back into defense, and Figo and Vieira came on. It was a very attacking formation that paid off almost immediately. Roma must have been expecting the same stinky Inter 'cause they allowed Maicon and Balotelli to walk fight up to their goal and put one home. Hurray. I thought we were finally back in the game, but then, no. After some uncharacteristic strangeness from Cambiasso, Roma get another goal and the acid in my stomach picks up again.

Back down two goals. Yikes. But still we soldiered on. In the face of that two-goal mountain to climb, we pulled up our socks and got to climbing. Our next goal came from the infamous penalty - our second of the season. As I sit here watching the game again (I DVR all of them), he sure looks pushed to me. If there are those that say he wasn't, I respect your opinion but I dont agree. In any event, the score was 2-3 and Inter still did not stop pouring forward. 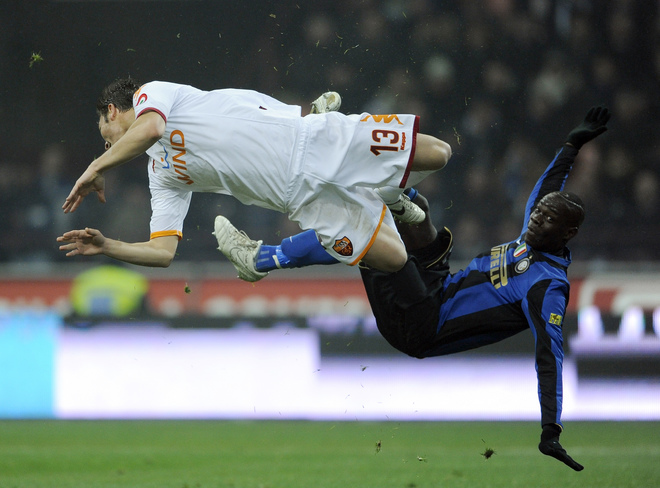 Balotelli and Motta try for the spectacular ball.

In the 77th minute, Crespo came on for whoops, on for Stankovic and BAM! Goal number three. Crespo gets his first goal of the season, and for a minute, the old Hernan comes shining through. But there was still 15 minutes left in the game and it could go either way. High tension indeed. Riise came close on a free kick in the last 5 minutes of the game. Luckily the Julio Cesar that we know and love was in goal for that kick instead of the body snatcher from the first half. Then there was a 1-on-1 between De Rossi and JC that Daniele thankfully put wide. Injury time was all about Roma taking shots at our goal. It was horrifying. Somehow, we managed to clear our lines and when that whistle blew, I realized that I hadn't taken a proper breath in 5 minutes. 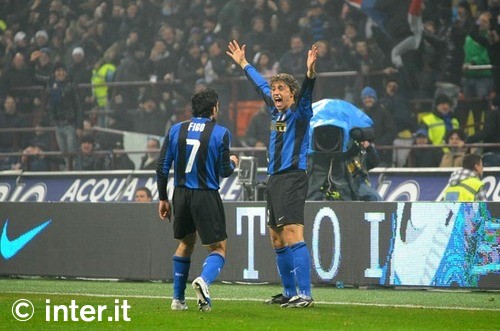 In the end, this draw felt like a win to me. I know we dropped 2 points against Juve, but the fact that we did not roll over at 0-2 and came back fighting is a testament to our determination.

"The point earned from tonight's match is a golden point because when you're losing 2-0 and then 3-1 against a top-level team it's not the same as losing against a team of low quality.

The match seemed lost after their third goal but the team's character prevailed. The team wasn't in top condition. It was without Ibrahimovic and the match against Roma seemed less important than the one we played against Manchester United on Tuesday, but in truth it wasn't and this match deserved maximum respect."

We have a midweek Coppa Italia game against Sampdoria (who looked great against Milan on Saturday), Genoa the following Saturday, Manchester United on Wednesday the 11th, and Fiorentina on Sunday the 15th. I am tired just thinking about it.

On top of the grueling schedule, our injury list is beginning to grow. Ibra failed a late fitness test on Sunday, Chivu and Samuel were already injured and somehow Nico picked up something that required "treatment" today. 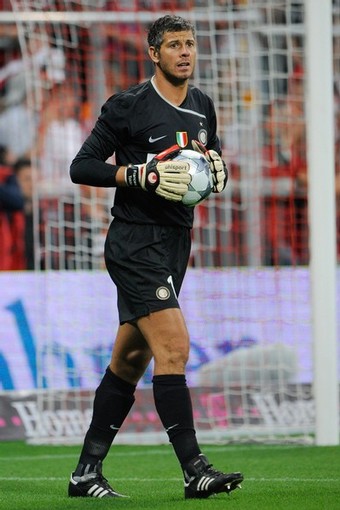 Toldo has signed a 2-year contract extension to play until 2011. I was afraid he would leave when his contract expired this summer. I am glad he is sticking around a little while longer. I bet we even see him in goal against Sampdoria. 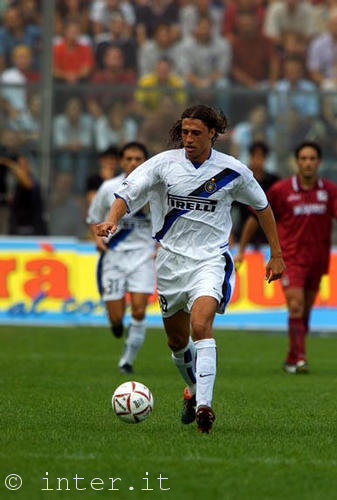 Crespo way back when against Reggina, September 2002.

Going the other way, Hernan Crespo has said he will be leaving the club this summer when his contract expires:

"... in June, without a doubt, I will change team. At this point it has become clear to me that this is the only solution as facts speak louder than words."

I will miss him, but I have to agree, it is time to go. We have had an on again, off again relationship - he even dallied with Milan for a year - but in the last two seasons, he has scored 27 goals for Inter. He has always been willing to give his all for the club and I wish him the best. Whatever happens these next few months, he can rest well in the knowledge that he was the hero for at least one last game.

Ok, Ragazzi, we have a busy busy week ahead of us. I will get something up for ahead of the Sampdoria but dont expect much.

Adriano as part of the new Nike "V for Victory" ad campaign. He's not as fat as I thought. 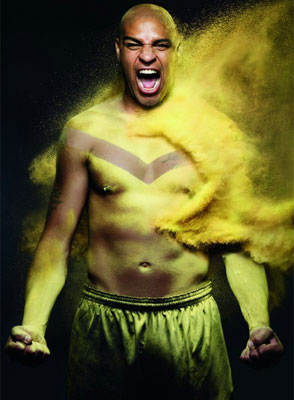