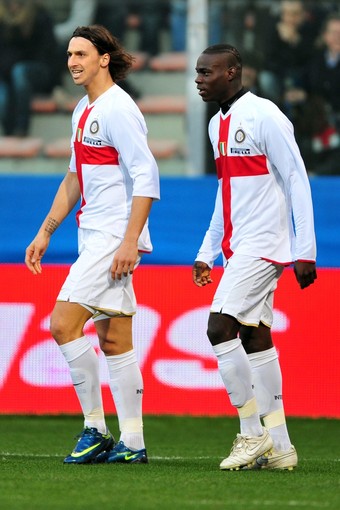 Genoa's unbeaten home record came to a crashing end today as, this time, Inter came away victorious from the Stadio Luigi Ferraris. The game was not without it's close calls, though, as Julio Cesar had to make more than one spectacular save. In addition, our injury woes in defense are beginning to pile up: both Materazzi and Burdisso had to be subbed out early in the first half due to injury. Ibrahimovic scored his 15th goal while Balotelli was awarded a goal.... Whether it actually was or not is up for some interpretation. I am quite happy to discount it. You all may make up your own minds. Inter played this game in their special centenary red and white away jerseys. They will also play in them for the Fiorentina game next week, and then they will go back to the plain white ones. It is a little freaky - in a time-warp sort of way - but I do love those shirts (I bought another one - a Maicon).

For those that did not see the game (or would like a reminder), here are the highlights (HQ at Youtube):

The lineup was much as I suspected, with Marco and Burdisso in central defense. The only surprises were Balotelli and Figo starting. The game started dangerously with Motta and Milito slicing through our defense like ... well.. like good strikers through inattentive defensemen. Luckily, Marco got there just in time - stretching out and forcing Motta to flub the angle of the shot. 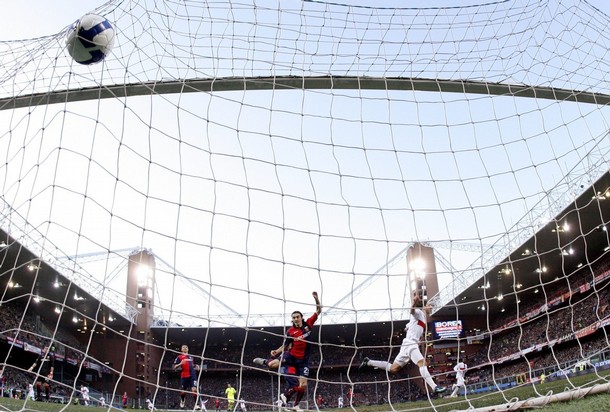 Ibra chips Rubinho for his 15th Serie A goal

The next minute was all about Inter as Stankovic fed a through ball to Ibra who showed off his remarkable ball control skills by chipping Genoa's keeper. Two minutes in and Inter ahead. Things got a little nervy for Genoa after that and there was some petulant ball throwing (Milito, Rossi, I am looking at you), and things started to get a bit fouly - on both sides. 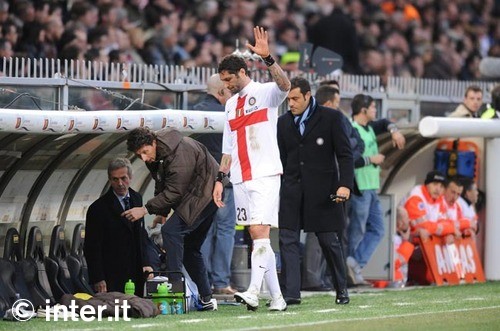 Povero Marco - I so wanted this season to go better for you.

Sixteen minutes into the match and Marco has to be subbed off due to injury. As he is walking to the byline, the Inter fans sing "Tutti Pazzi Per Materazzi" which I thought was quite sweet. Cordoba comes on and everything is ok for a while. Milito is still causing all sorts of problems for us, though it seems that Burdisso has his number (the good Nico had shown up). Then, 15 minutes later - DISASTER. Burdisso is also injured and has to come off. I think I can safely say that all Inter fans were thinking "not Rivas, not Rivas." Mou must have heard us because he put Muntari on instead. Cambiasso dropped back into defense and we all crossed our fingers.

Both Nico and Marco have been examined and the news is not good. Burdisso has injured both of his legs - a torn tendon in his right and ligament damage in the left knee - and may well be out the rest of the season. Sure, he had his faults, but he was our best reserve defender. Marco's injuries are not so severe (thigh strain), but may keep him out for three weeks. That means, right now, our only healthy central defenders are Nelson Rivas (shudder), Ivan Cordoba, and Andrea Mei (a youth player who has never played in Serie A). This does not inspire confidence in front of the ManU game.

But back to Genoa and a bit of a rewind. 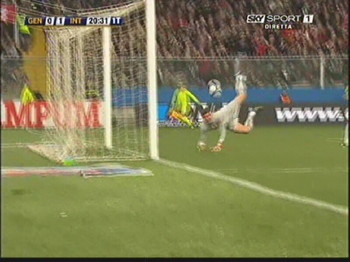 After Marco's substitution, Julio Cesar made an absolutely astounding reflex save to keep Motta's header out of the net. Really, there are no words. If you did not see it during the game, watch the replay. This only served to rile Milito up more. In the next minute he kicks the ball away after being flagged for offside. As this was the second time he had done it, the referee rewarded his childish behavior with a yellow card. Basically, after this Genoa has the lion's share of the possession and spend the next 20 minutes taking pot shots at our goal. Most of them are off target, but close to the end of the half, Julio Cesar performed another miracolo with a quick double save. Whatever we are paying him - double it.

The half finished with 10 minutes of the ball knocking around the midfield punctuated by Ibra body-checking poor little Brocchetti into next week (and picking up a yellow card for it), then taking a ball full to his groinal nether regions. Basically, Ibra is in full kick and Rubinho kicks the ball into his er.. open legs from about 2 feet away. OUCH. 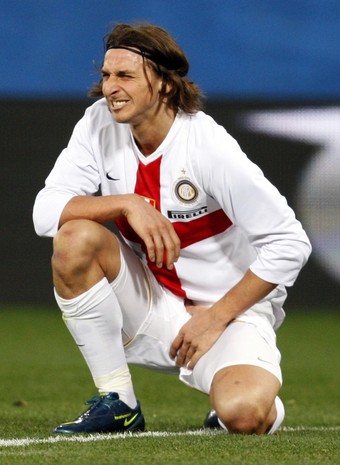 Zlatan takes one for the team.

The second half saw a Genoa that was just as attacking with double our shots on goal, but also somewhat disorganized. Of course, it could also be that Figo had finally woken up so Inter were slightly more effective. Really, the only exciting moment of the second half was Balotelli's goal/not goal in the 60th minute. The play started with a free-kick taken by Julio Cesar. The ball skipped off Ibra's head and Balotelli knocked it over the line - maybe. Whatever your opinion, the goal was awarded and Balotelli performed his increasingly irritating goal celebration. 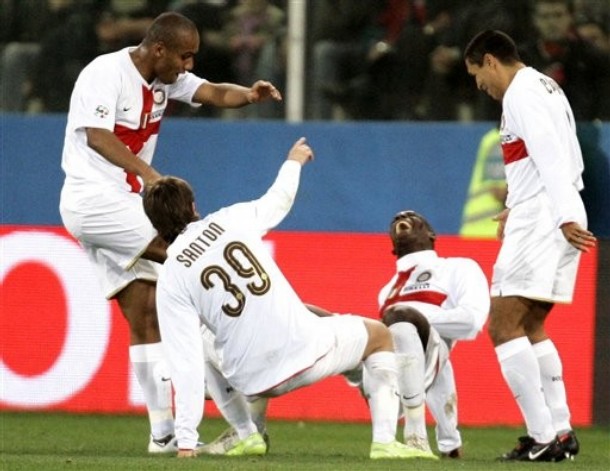 Maicon, kick him in the ass once for me.

The game finished much as it started, with Genoa having all the possession and all the shots on goal, and Inter hoping for the break. The only difference is that Mancini came on for Figo in the 73rd minute, and what do you know, picks up a card. There was a lot of desperate defending on our part, a couple of half chances, and a pretty good effort from Mancini, but nothing came of it - for either side.

“We were still thinking about Inter. We were irritable because we were still smarting from the penalty incident with Inter.”

I had no idea that Inter had so much power - we can force a draw from Roma when we are not even playing them. Wow. Too bad we cant jinx a team that is really a problem for us - say Juventus or Manchester United maybe. And where was that power last season when we really needed it? I wonder if it will also be Inter's fault if they loose against Arsenal again.

Ok, Ragazzi, off we go to Manchester for the game of our season. Screw the derbies, screw the Juve games, this one will be our true test. I just hope we have a defender or two to field.

I leave with a little Mourniho, looking dapper in the face of his adversaries 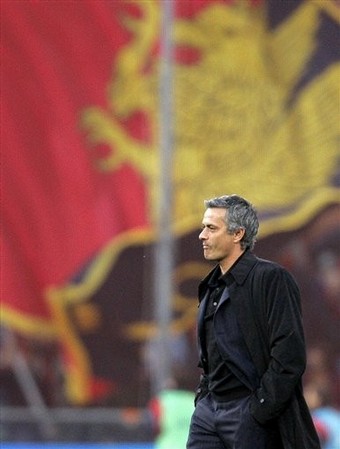