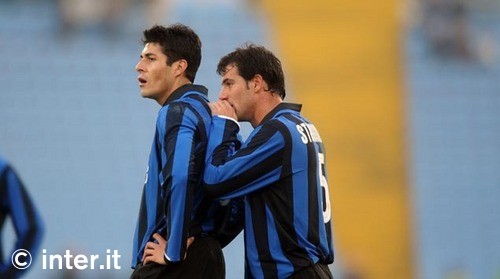 Traditionally, this is not an easy game for us. The past two seasons, this tie ended 0-0. We had one win in the 2005/6 season, then it was back to draws and (gulp) losses. We beat the snot out of them once in 1980 (0-4) and once in 1960 (0-6), but over the years, and especially since their return to Serie A in 1980, we are more likely to draw or lose this game than we are to win. Right now, that scares the bejeesus out of me. Especially when Juventus has to play Chievo. No offense to the Chievo fans, but I dont see them making much of a dent against Juve. Inter, of course, dont really have a choice. We have to win this game... plus 6 more.

As I said, last year this match was a goalless draw. César Aparecido (aka The Bad César), was sent off early in the first half. The rest was a series missed opportunities and desperate defending:

Well, there is an Udinese blog here, and mostly it is kept up, but Vin is a busy graduate student with all sorts of important other things to do, so I sort of doubt he will get anything up. I am a poor substitute, but I will take a stab at it.

The big news here is that poor Toto Di Natale is out - probably for the rest of the season. Although the injury is not as serious as first feared, it is still bad and he will not be available this weekend. Also injured is Ferronetti, Tissone, Coda, Lukovic, and Handovic. Add that to the two suspensions, Domizzi and Sanchez, and Udinese have just about a third of their entire roster out for one reason or another. Ouch. Still, they have a lot of talent still on the bench, including the quail man himself, Fabio Quagliarella.

Udinese are a tough team, and, this season, are especially tough at home. They have only lost two home games (Reggina and Chievo); both finished 1-0. Of course, the Chievo game hardly counts, Udinese played with 10 men for most of the second half, then finally lost due to an own goal. Most usually, Udinese win at home, and have beaten Palermo (3-1), Roma (3-1), Juventus (2-1), and Zenit St. Petersburg (2-0) at the Stadio Friuli. 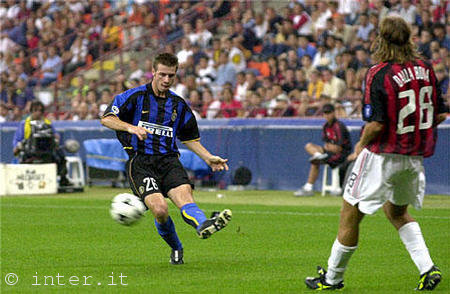 Giovanni Pasquale, way back when.

Of course, Udinese have an ex-Inter player on their team (I think everyone does), who wants to show his old team what he can do. Giovanni Pasquale (defender, Inter youth product, first team from 2002 through 2004) would like to thank Inter for all that they taught him, but said:

"Now, though, I am an Udinese player and Sunday I would like to wrangle a good race and maybe trip up Inter. I think it will be important for us to take the field with the desire to prove all that we do."

Well, I expect nothing less from an ex Inter player.

La Gazzetta thinks the formation with be 4-3-3:

And I am in no position to disagree. 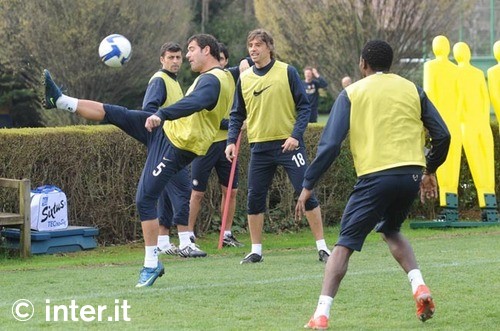 Almost ready for the match.

The big news for us is that Maicon is injured - probably for the rest of the season, and Adriano is AWOL. In the case of Maicon, there is no getting around it - missing him will be a blow. For those that say we should just move Zanetti back (that was his spot before Maicon, after all), Mou says:

"We do not have enough players for the midfield to be able to say that from today and until the end of the championship, Zanetti will be the rightback." 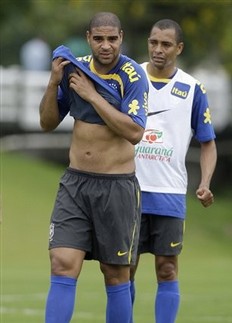 As for Adriano, the situation is a little more dire than it first appeared. No one seems to know where he is and there is even some speculation that he may have been kidnapped.

Mourinho was serious and calm about the situation, saying: "This is not indiscipline or a joke, it is much more serious. The only thing I can do, with sadness and no anger or criticism, is to say nothing."

The reporters at the press conference even noted that Mou looked very sad, to which he replied: "I am sad because of Adriano's tale."

This could well be quite serious and now I feel terrible about assuming he was just a drunken, irresponsible man-child.

Predicting the line-up for this game is tricky, there are quite a few factors to consider. Mou did say that the among the players who did not go on national duty, there was a "core group of people who will play tomorrow." I see this core as our defense. Our midfield choices are more limited, and I suspect the usual suspects will play. Up front, Cruz and/or Crespo could make an appearance. Mou said:

"This week I saw Crespo and Cruz to train well, with the desire to do something for the team. We are at a point in the season where a goal, something that may seem only a small contribution can become absolutely crucial, and we have players who can do this."

Given all this input, and no real word on formation (with Mou, who knows), I dont know that I will attempt a line up. I will leave it up to those of you who are more savvy than I (consider it a challenge!).

To wrap up, this will be a hard game for us. People are tired. Udinese is a good, organized team that plays very well at home. True, they may be a tad distracted by their midweek UEFA Cup game, but I dont think it will be much of a problem for them. Every team wants to beat us - being the reigning champs and all - and they will throw everything at us. 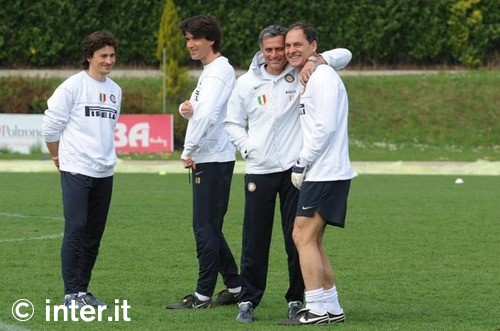 Mou, spreadin' the good vibes around.

We really need a good showing here. Full points are a must, especially if we would like to finish the season with a little tranquility. We finally have a full compliment of central defenders, though the loss of Maicon is a blow. I think we can win tomorrow. I think the team is determined and focused. Mou agrees, saying:

"I have positive vibes. During the international break we worked well with a group of players. I think this is the kind of clash that Inter need because they know what difficulties there will be in Udine tomorrow. We will have to play a match of great quality and concentration. This is what the team needs."

So, lets all hope that positive vibes manifest themselves as three points. Also, that Chievo have the game of their season! (I am not really too optimistic about that last one, but a girl can dream.)

Ibra and Marco, just chillaxin' before the game 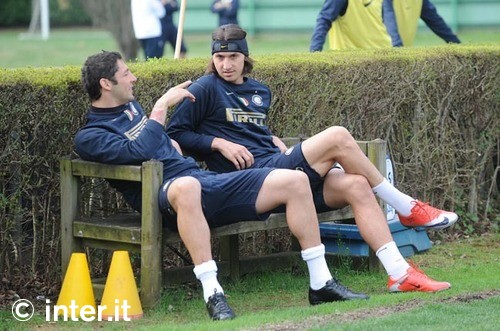