Share All sharing options for: Chievo 2-2 Inter: Everyone Take One Baby Step Forward 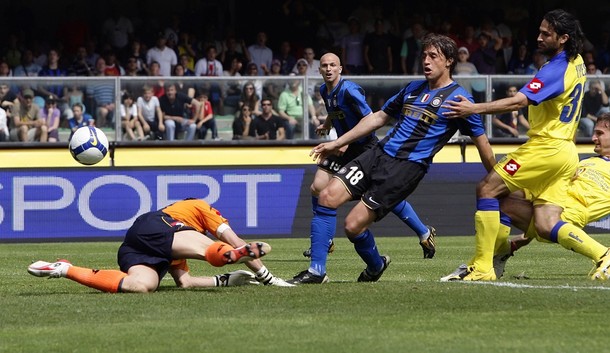 After a very frustrating match against a surprisingly worthy adversary, Inter sit at the top of the table, 7 points ahead of Milan -- Exactly where we were last week. One more draw for Inter (and both our closest rivals) means we all have to wait at least one more week to decide the outcome of this year's championship. Still, one baby step forward is better than one giant step back. Or, as Mou said:

"I can only say that we needed six points and now we need five. I'm not happy with this result but I prefer a situation in which we need five points rather than six... There's nothing dramatic in what happened today. We still need five points, we have two games at the Meazza to play and we have to win these points together with our fans."

So there. The draw was unfortunate, especially as we were ahead twice and really should have closed the game down when the scoreline was 1-2, but it is no big deal. Still and all, though, I really really wanted to win this one. 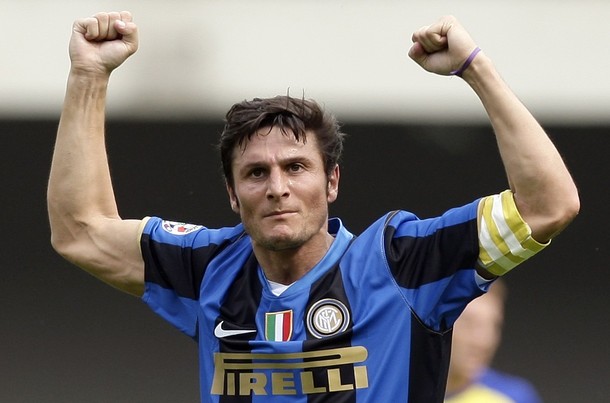 Javier Zanetti is strong to the finish 'cause he eats his spinach.

As for the game itself, I would love to give you all a complete recap, but it was early (6 AM!), I was watching a crappy little stream, and I dont have a DVR here at the beach (we are roughing it). All this means that for a really good summary, you should try here or here, or even here. All I have are a few impressions and a couple thoughts... Oh, and the highlights:

Ok, so enough about the Chievo game. We proved that we could score without Ibra but a fat lot of good it did us in the end. We had over 60% of the possession but Chievo had four more shots on goal than we did (according to ESPN).

The lads were back at training today and Mou included midfielder Rene Krhin and attacking midfielder Joel Chuwuma Obi from our Primavera squad. I wonder if they will actually see the pitch this season. Maybe if we sew up the scudetto a little early.

Paolo Orlandoni has renewed for another season.

There are still tickets available for this weekend's game against Siena. It could be the one, so, if you can, go out and support the club.

Inter are being linked to any number of players for this summer.

From Chelsea, there are the insistent rumors about Didier Drogba (who we may get on the cheap after his post CL antics) and Obi Mikel (who we have offered 17 million Euro for).

Inter are looking at Hleb, Ribary, Cesc Fabregas, and David Silva. Sure we are, Inter and every other team.

Juve and Inter are neck in neck for Quagliarella. Apparently, it all hangs on what Juve will do with Treguzet and Inter with Acquafresca.

So, everyone, take what you want from the rumor bin and run with it.

Here is a little preview of Rene Krhin (thank you Inter_Pervs! What would I do without you?).