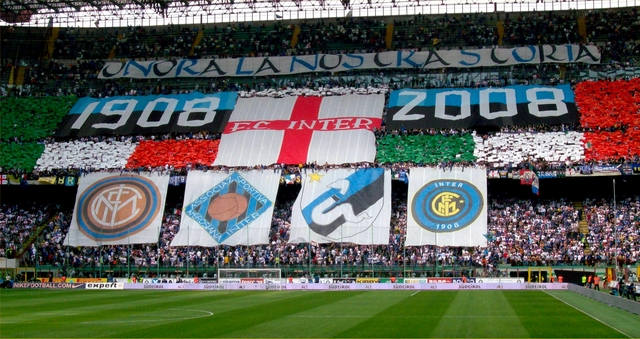 What: Inter v Siena
When: Sunday, May 17, 8:30 pm local time (2:30 pm eastern, 11:30 am pacific)
Where: Stadio Giuseppe Meazza, Milan
How to Watch: Live on Fox Soccer Channel or streaming in the regular places: MyP2P, Justin.tv, Rojadirecta, Ustream, and ATDHE.net

For the third year in a row, Inter's scudetto dreams are pinned on a game against Siena. In April 2007, everything went according to plan as Marco Materazzi fired home the winning goal. Last year... well... not so much. The score was tied at 2-all when Inter were awarded a softish penalty. Strangely, Marco stepped up to take it... and Manniger saved it. I think every single Inter fan simultaneously let out a huge groan of pent up angst. It was terrible. The last time we played Siena in Tuscany, we won with an offside goal - not pretty. Sunday, what do you say we go out there and legitimately kick some Tuscan butt - no penalties, no offside goals. Yes? Yes. Of course, if Udinese beat Milan on Saturday, the outcome of Sunday's game wont matter. It is not that I dont think Udinese can beat Milan - I am sure they are more than capable - but I prefer to win the title on the pitch. I am not looking for any favors.

Matthew has not updated the Siena blog since December. I think it is dead. I guess this section is all me, then.

Marco Giampaolo has called up 22 players:

Siena come into this match in 14th place with 43 points - well above the relegation zone, but below any chance of Europe. Basically, at this point, they are playing for pride. They have a goal tally in line with their place in the table (32) but have only allowed 37 (just 2 more than Juve and Fiorentina) and have the sixth best defensive record in the league. Clearly they will not be easy to score against. Well, unless you are Milan, that is.

Statistically speaking, Siena dont often win away from home. Of the 17 games they have played on the road this season, they have lost 12, won 3, and drawn the other 2. At home, it is a different story: last week they beat Palermo (no mean feat) so may well be feeling confident ahead of Sunday's game. Giampaolo has pledged that his team will give their all, saying:

"As for who finishes second and who is relegated, that all depends on a series of results and not just the one. I can pledge we will give 100 per cent. We are safe, but nobody likes to be embarrassed by a thumping.”

I guess it is clear that Ibra and Balotelli will start in attack. Mou confirmed that Muntari and Chivu will be starting. I guess that means Santon will not be starting after all. For those of you who are concerned with history repeating itself, Mourinho has already said that Marco will start on the bench.

So, in terms of a starting lineup, I think La Gazzetta is right on the money:

As for substitutions, though, who knows. At this point in the championship, we really dont have a whole lot of options.

Mou has laid down the law (I paraphrase): Come back to the dressing room as champions or shower at home - dont waste the water at the San Siro! A bit harsh, but this is for all the marbles so I dont mind it so much. Really, there is not a whole lot to say at this point. The league is in our hands - it is all up to the team now.