C'mon Boys, Lets Get This One Right

Share All sharing options for: C'mon Boys, Lets Get This One Right

Alright. Here we go. One more chance to get back on track towards the scudetto. It is true, we have not been on the best run lately; I think loosing both Maicon and Adriano was a bigger blow than any of us would like to admit. We lost our last game, and failed to hold onto leads in the two before that. Five points from our last four games is simply not good enough. But hooray! We have the chance to turn all that around tomorrow by beating the snot out of poor Lazio. It is nothing personal, but, we really, really need the points.

Last year we did just that (beat the snot out of Lazio, that is). The game ended 3-0 with a goal by Maicon and Suazo, and a converted penalty from Ibra:

If you want to know about Lazio, I would suggest a trip to Cathal's blog. I am sure he knows much more about the team than I.

Delio Rossi has called up 19 players:

Goran Pandev, Lazio's second highest goal scorer, is out injured. Joining him are Inzaghi (the lesser), Mauri, Pandev, Diakite, and Dabo. Even without Pandev, though, Lazio have more than enough fire power between Mauro Zárate (12 goals) and Tommaso Rocchi (8 goals). All told, Lazio have scored 44 goals in Serie A, that is one more than Genoa. Still, they have some holes in the back, having conceded 46 goals this season already. Surely they wouldn't notice two or three more.

Mourinho expects a tough game and I agree. He said:

"... the coach and players from Lazio are decent people who want play well and have their own pride. Like us, they always want to win and will be at San Siro to play their own race without giving anything to anyone. So I expect a very difficult match: Lazio plays for pride for the three points and because they are great professionals, we play for all these reasons, but also for the three victories that we lack to win the title. Our motivation, of course, is very strong."

Mourinho has called up 20 players, almost everyone who is not injured or suspended:

The good news is that Muntari is fit to play. The bad news is, so are Vieira and Figo. Oh, and Deki and Mario are suspended. The Stankovic thing is probably something we can work around, but not Balotelli means that we are woefully understaffed in the striker department. Rumors are that either Cruz or Mancini will partner up front with Ibra, with Figo back in Deki's place. Sigh. It is beginning to feel a bit like barrel scraping time. I feel a bit like if we can win this game with this squad, we may just pull it off yet. I would be lying if I said I was not nervous. I am, though, attempting to maintain a positive attitude.

Confession time: I am leaving on vacation tomorrow. Dont worry, the beach house we rented has internet so I will still be here. No, the problem is, we will probably be on the road tomorrow at 11:30 am so I will miss the game. I just pray that the house has FSC so I can watch a replay.

Also, it means that I dont really have much time tonight. I wanted to include some photos from the little 6-a-side match that Mourinho and his coaching staff played against some of the team employees. Mourinho's team won. Really, if you have not seen them (they are only on the Italian version of Inter's web page), you should. They are a hoot. Mou even scored a goal!

Oh, and it looks like Santon got another tattoo, this time on his arm. Can any of you decipher it? I cant. 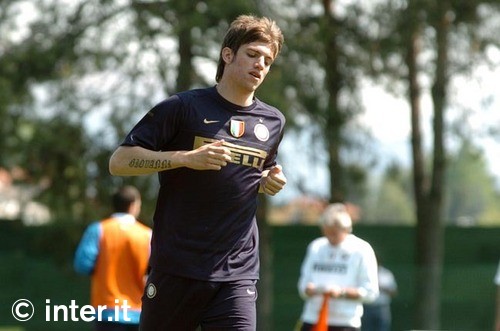 That better not be his name tattooed there on his arm!

First the eyebrow and now this - Santon better slow down.

Quit having so much fun until you actually WIN a game! But they are cute, aren't they? 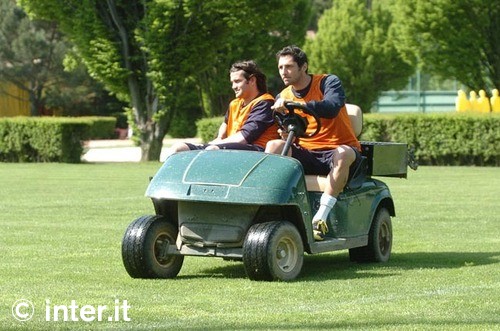