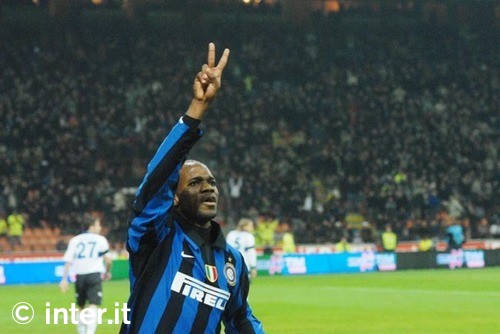 What: Inter v Atalanta
Where: San Siro, Milan
When: Sunday, May 31, 3pm local time (6am pacific, 9am eastern)
How to Watch: Fox Soccer Channel is showing this game on delay at 10am pacific, 1pm eastern. To watch live, find a stream: MyP2P, Justin.tv, Rojadirecta, Ustream, or ATDHE.net.

For all intents and purposes, this game is Inter's victory lap for the season. With all the transfer rumors and non-renewed contracts, for many players this game may be their last one in an Inter jersey (sniffle). This may also be the last chance for some to prove their worth to Mourinho. For my part, I want a little payback for that 3-1 drubbing Atalanta handed out to us in Bergamo. This time, though, they are coming to our house and Inter are unbeaten at home in league play (damn you Panathinaikos!). Statistically speaking, Inter almost always win this tie: out of 49 meetings in Milan, Atalanta have only won 7, and only one in the last 20 years. Records are made to be broken, though, and much to our chagrin, Atalanta has already proven they can beat us. I know that Inter's season is over and the trophy presentation and celebrations may be a distraction, but I expect full concentration on Sunday. I want a bright finish to this season... Oh, and a golden boot for Ibra.

Last year this fixture ended 2-1 with goals from Suazo and Cruz for Inter, and Floccari for Atalanta. Here are the highlights:

Atalanta has no players on suspension but will be without the services of Ferreira Pinto, Floccari, De Ascentis, or Valdes. All four are injured. True, Floccari is Atalanta's top scorer, but they seem to be doing just fine without him. Last weekend Gianvito Plasmati put two past Palermo, while the weekend before, Cigarini and Pellegrino each put one past Juve. 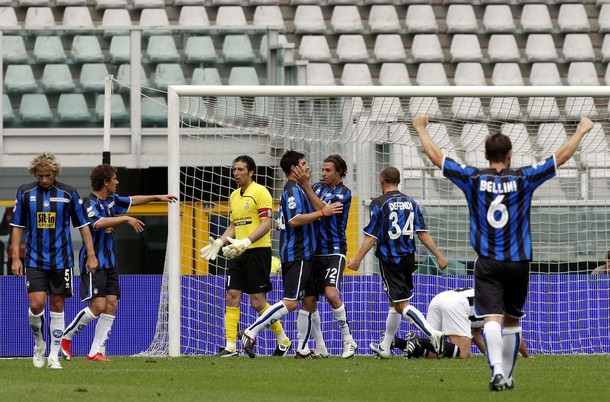 This is not what we want to see happen against Inter.

Although Europe is out of Atalanta's grasp this season, they still have something to play for on Sunday. According to defender Federico Peluso, Atalanta will play to win for the prestige of being the only team to take 6 points from Inter and in order to end the season with 50 points and tie the club's record for points in a season.

Whatever the outcome of the match, officially Atalanta will be playing without home support. Residents of the town and province of Bergamo will not be allowed into the San Siro for the game. I suspect, though, that the ban will be much like the one that was supposed to block Inter fans from traveling to Parma for the final game last season. Somehow or another, quite a few Interisti found their way into the Stadio Ennio Tardini and I expect a few Atalanta fans will similarly find their way into the San Siro. I expect that Atalanta has no intention of rolling over for us. They would be more than happy to take another 3 points from us and ruin the party.

Materazzi, Maxwell, Bolzoni, and Rivas are out injured and Obinna is away with the Nigerian national team.

I guess he was not joking when he said the Maicon would play the last game to celebrate the scudetto - there he is on the list and everything. Oh, and I was wrong, it looks like Chivu is available after all. I guess I miscounted those cards. As for the line-up, no guessing here as Mourinho has already named his starting eleven:

I expect Maicon will see a few minutes, to celebrate, and hopefully we will be winning enough to let Cruz get out there. After all that he has meant to the club, I would hate for his last game for us be that loss to Cagliari last week. 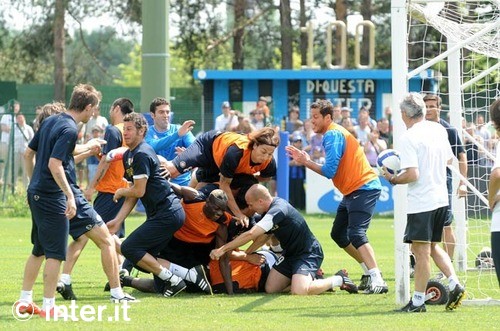 The mood was clearly jovial at training today, and after the session the Inter staff played a pick-up game with a team of journalists. The journalists lost. Hopefully some fan watching training today had the presence of mind to record that game and post it up somewhere. I will have to start digging.

As he said he would last week, Mourinho is giving up his place on the bench to his coaching staff as a thank you for all their hard behind the scenes work they do. Today he had vice coach Giuseppe Baresi, his assistants Rui Faria, Daniele Bernazzani and Andrè Villas Boas, goalkeeper coach Silvino and fitness coach Claudio Gaudino with him at the press conference. Tomorrow Daniele Bernazzani will take his place on the bench.

During the press conference, Mou expressed his love for Inter and for Interisti. I think that midnight bus ride through Milan and the spontaneous party in the Piazza del Duomo helped him bond with the players and the fans. He let his guard down a little (as you can see from the photos), and now he is one of us. Well, for at least another year, anyway.

He also gave away a little of his plans for Inter as a club and the future of the team, saying:

"The sports center in Appiano Gentile will be different, the team and its profile will be different, Milito and Motta are already an important response in the direction in which we want to go and all this effort, I really like. It is certainly a project that has some risks: changing seven, eight players for three, four plus four new young people. We have a team that finishes a cycle, we have a team that always opens a new one. Working with players already in terms of winning, and at the same time with young people as Bélec, Balotelli, Santon, Obi, Krhin and Destro, with all less than 19 years for me is something really fantastic. This group of boys will always be better every year that passes. At the beginning of the season we played a friendly match at Locarno that made me think: in the field were not holding players, nine of which were more than 30 years old. I remember talking to my staff and said that our second option would have a wider margin for improvement. That team was a team with nine players with less than twenty-two years. If next summer we have a friendly in Locarno, Bellinzona, Lugano and Como, surely we'll play with Bélec, Krhin, Obi, Destro and all the young people who have a proposed development. Obviously this is a risk, but we want to run all from me and the president, continuing to Branca, Oriali and my colleagues. For us it is a completely different challenge, a new project. Clearly, then, buying players like Milito and Motta, and even completing a couple more operations of the same type of profile, this will enable us to continue to work to win. Surely we want to have a team of high quality, but the work will be much more fun for everyone. "

So, if I understand Mourinho, next year we will have the same number of players in the squad, but a higher proportion of promoted youth players. Yes?

Alright, this is our last league game of the season and I would like to go out with a bang. More than that, I want to crush Atalanta just to show that we can. 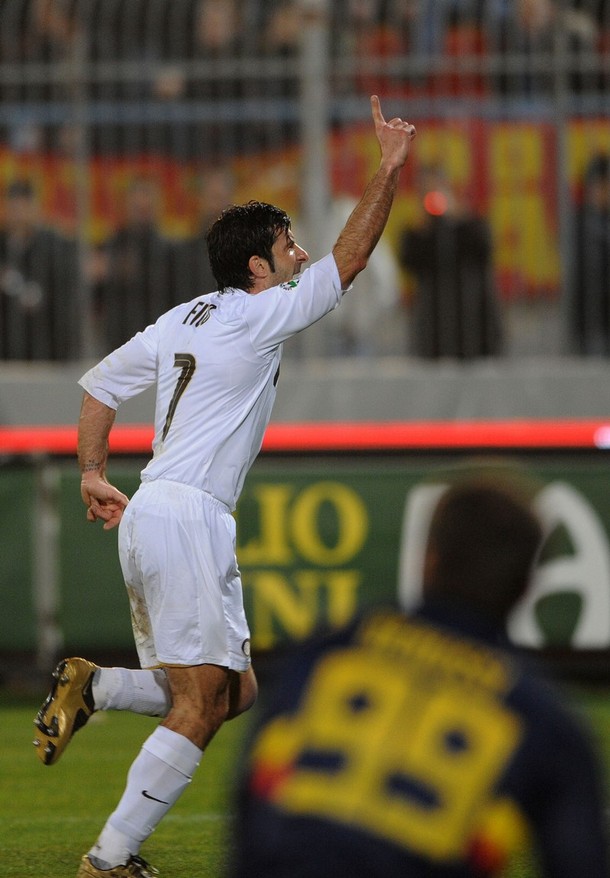