PoS: The Trophy and Beyond

Share All sharing options for: PoS: The Trophy and Beyond 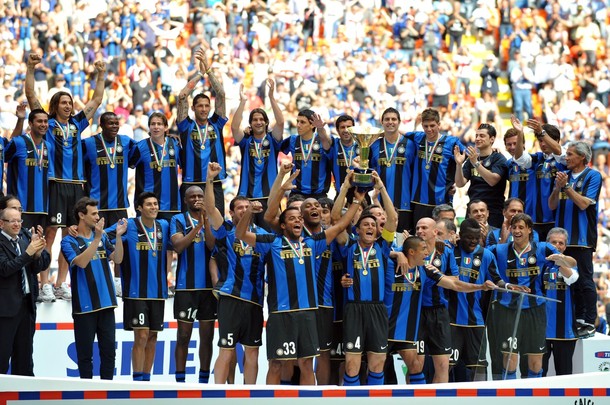 Picture of the Season: Champions of Italy... Again!

Oh ya, the rest. Well, Inter beat Atalanta 4-3, with a brace from Ibra, one from Muntari, and one from Cambiasso. Ibra's last goal was enough to put him over the top, and with 25 goals, Ibra got his golden boot (which he now wants to take to Spain, but more on that later). If anyone is interested, Francesco thoughtfully posted a compilation of all of Ibra's Serie A goals (here). In the end, Inter finished on 84 points (10 ahead of both Milan and Juve), had the best defensive record (allowed 32 goals), and tied with Milan for the most goals scored (70). I know we still stumbled in Europe, but, as consolation prizes go, the Scudetto rocks pretty darn hard. Plus, I am growing attached to that little shield on our kits.

I was a little blasé above about the game. In reality, it was a real nail biter. First we went ahead, then they equalized, then they went ahead... Well, see for yourself:

It was Figo's last game and everyone was appropriately sniffly (including yours truly). The squad all wore Figo jerseys while warming up, the club gave him a platter, and probably the most moving thing, Zanetti gave him the captain's arm band. Once again, you can see for yourself (keep the tissue handy):

The trophy presentation was after the game and, while exciting, was a little anticlimactic. Last year we won by the skin of our teeth (very exciting), and the year before was our first on the pitch in almost forever - plus we kicked everyone's ass (also very exciting). This year, the trophy presentation was a nice little "Hooray" moment, but the real emotions (for me) came a couple weeks earlier when we won mathematically. For those that understand Italian (or just like to see the pretty pictures), SkySport did a special for Inter's 17th Scudetto which has been posted up on Youtube as a four-part series.

(oh, and as an aside: I would like to point out that all those fans of other Italian clubs that flip us crap for not winning the Champions League - they would have loved to see their team hoisting the championship trophy this season. No matter what they say, they are eating their hearts out. Sort of like how we feel about Barcelona right now.)

One of the highlights for me is when the players all bring their little children on the pitch during the trophy ceremony. Most of the time we see the squad they are these hardened warriors complete with game-face. I just love it when they show that softer, daddy side... Like this (everybody all together, awwwwwww): 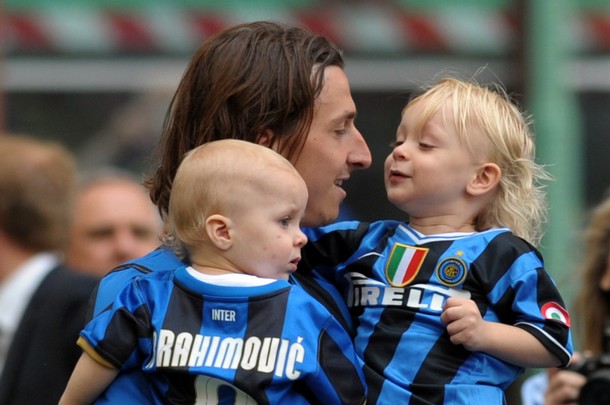 Well, I will do a year-end review (promise) where we can hash over the best and worst of the past 38 game days. Plus, there is national team football. Between the U21 Euros, WC qualifies, International Friendlies, and the Confederation Cup, Inter has 15 players that have been called up to play for their countries (all times are local, Italian times):

Everyone mark your calenders - for Confederation Cup games, Daryl has kindly posted a broadcast schedule for the US and UK.

Oh, and later in the summer there will be a full complement of friendlies and cup tournaments, including the World Football Challenge which may see Inter coming to a city near you (and I think tickets are still available). I will do my best to keep you all informed and up to date about all of them.

Then there is the fun and games of the summer transfer period.... There is just so darn much to do this summer, I hope you will all stick around. It has been a great season and a great campaign - I cant wait to do it again next year!

And here is a little Scudetto-themed Julio Cesar love - at least there are no transfer rumors around him (crossing myself, sprinkling salt, knocking wood):