Share All sharing options for: O CAPTAIN! my Captain!

our fearful trip is done;
The ship has weather’d every rack, the prize we sought is won;
The port is near, the bells I hear, the people all exulting,

And no, I wasn't particularly fond of Dead Poets Society...

Lately, when I listen to trash podcasts about football, if they deign to mention Serie A at all, they don’t spend a whole lot of time on Inter. And if they spend time on Inter, they talk about Ibra and Maicon, which is fair, considering how hard their agents had to work to make sure that was exactly what happened. It’s also fair considering the relative lack of independent thought that flows through a typical football podcast host.

It’s mildly irritating that I have to hear and read constantly about the legends of other teams in Serie A as though they are a unique animal to that team – as though we don’t have them too. We’ve all read them and I hope we were all entertained: "Inter is full of mercenaries". "Players don’t stay at Inter for years and years". "Inter players don’t have any loyalty". I won’t bother to mention the names of these fans of other teams who often visit only to show off their inability to read or count.

I make some allowances for immediacy. Players that are hot last season are the ones that are talked about. That makes sense. For example, Ibra had a great season this year and I would be suspicious if people weren’t talking about wanting his services. I also try to make some allowances for the fact that most people, even supporters of Serie A, like to root for the attacker, rather than the defender. 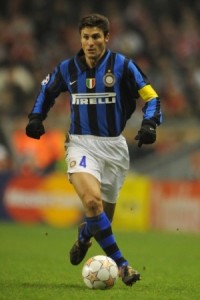 But dammit, I just don’t hear enough about Javier Zanetti.

I am not really asking for a whole hell of a lot here.

I mean, it’s nice and all, but I don’t expect a cheesy ESPN style 30 minute “in depth” story about how he’s a great human being before every game. I applaud his efforts, and I enjoy reading those stories in the newspaper – in the World News Section - not the Sports section.

I expect to hear and read more about Javier Zanetti for many different reasons.

Throw out the fact that he’s the captain of the team. He just completed his 14th season with the club. In those 14 seasons he failed to have at least 32 league appearances 3 times, in the 2005 - 2006 season he had the lowest number of appearances in his career, 25. That’s 467 league appearances, 645 in all competitions. That includes 119 international appearances. The last 2 seasons Javier played in every Serie A game there was to play in.

And all due respect to the lower tier teams, but he’s not making the squad at a team fighting off relegation, he's making those trips to the pitch on a Champions League qualifying team. He’s beating quality competition for a roster spot at the age of 36 as of August 10. Every time he takes the field and competes at a high level there should be as much fanfare behind it as there is for Maldini, Totti and del Piero. There should be - there isn’t, but there should be. 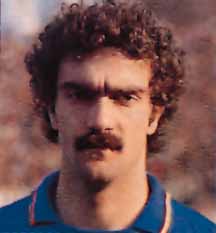 Javier started this incredible run with Inter in 1995 at the age of 22. The Captain at the time was “Lo Zio” Giuseppe Bergomi. Bergomi was the right back on the Inter defense and moved inside as he got older and Zanetti took his place on the pitch. Zanetti, when he first arrived was called “Il Trattore” because he is strong, he can run all day and he’s tough, but he wasn’t particularly fast. He would be well known for marauding runs up the right and an innate quality to make tackles. Even then he led by example and over the years would be shifted around the formation to accommodate different coaches and their ideas. He never complained – about his contract or his playing location. When Maicon arrived, he moved again to the midfield, but he is often Maicon’s cover, doing the dirty work behind Maicon and playing wherever he’s needed. 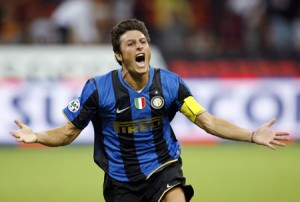 Usually it’s okay with me, that most of the time he’s in the background. If other teams had more discerning fans, they would all demand a player like Zanetti to be on their team: smart, versatile, a good passer and tough. As it is, I like to listen to them grumble and gripe about not having a target man or an AM or a DM or a Winger. Zanetti is just a player who at 36 can walk onto any team in Serie A and start somewhere immediately.

I don’t really expect too many Inter supporters to disagree with me that Zanetti should get more credit for his abilities. We all know that he gets overshadowed because he’s not an attacker and he’s not as flashy with the ball. At Inter there are names that find the net a lot more often than he does. And let’s face it; if he played in Milan he would get the whole Berlusconi media machine behind him. But he gets overshadowed so often that I just felt like I wanted to say something to make sure we don’t forget that he’s there and still a great player.