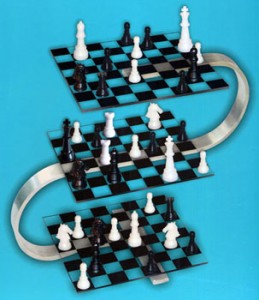 The Silly Season is at the endgame stage of the weird chess match between player, agent, other team sporting director and our heroes at Corso Vittorio Emanuele II.

Allowing for the fact that there will most likely be a proper season preview of our Fab 30 (!?) up some time closer to the season opener, instead of looking at players now, I would like to - although it’s wildly speculative and may be subject to radical change - take a look at the team’s strategy and tactics.

This isn’t intended to be a lecture, it’s just a fun exercise about how I see the club being run on the manager level and the hope is that people will jump in and give their 2 dinari. Mourinho is a good manager, I think, but there are lots of ways to run a team.

First of all I would like to say that this didn’t come out of thin air. I am familiar with an author – I am sure that many of you are too – named Jonathan Wilson. He wrote a book about his view on the evolution of formations in football called Inverting the Pyramid. It was a so-so read and Mr. Wilson sometimes writes articles for the Guardian Uk. The most recent one that I read, talked about – as usual for him and one of the reasons I don’t particularly rave about his book – English tactics. But it made me think about Inter and here we are. 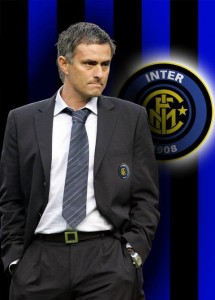 Before we can decide how we are gong to conduct war each week, we need an overarching doctrine. In my opinion, Mourinho, to my knowledge, has never come out and declared his manifesto on the perfect team. But judging from what I have seen last season and some anecdotal evidence I think that he has 4 basic tenets:

We will defend. Mourinho’s offense comes from the defense although it’s not necessarily the traditional counter attack that lovers of calcio are connoisseurs of. Mourinho’s defense starts in the midfield and it starts in the attacker’s side of midfield, if possible. See also, Inter’s goal against Monaco this preseason is a perfect example of what Mourinho’s idea of perfect defense does.

We will possess the ball. Mourinho’s will is to limit attacks on his team by not letting other teams have the ball very long, or often. To do this every band, or level, of the team from the attack, through the midfield and even the defense must be able to pass the ball and keep possession. This more than anything else was the reason for the quest of Carvalho and the acquisition of Lucio. Mourinho likes having someone to pass the ball from the defense up or from the field back – reliably.

We will control the center. Mourinho likes the 451 formation. Why? Consider this; the only 442 based formation he plays puts two players up the spine of the field – kind of like the 451. In Chess and in football the basics are the same: either control the middle, or do not allow the opponent to. The opponents are then forced to work the flanks where there is less risk for us and it’s less likely that our opponents will have dangerous players there. Consider, in all of our rivals in Serie A, the most dangerous players (Ronaldinho, Pato, del Piero, Amauri, Totti, Vucinic, Gilardino, Miccoli, Floccari, etc.) are located where on the field?

We will use the width of the field. Ever wonder why a player like Maicon always seems to be running all alone down the sideline? It’s a given that if we glut the middle of the field with players in an attempt to control it, then our opponents will be forced to do the same. It sets up an attack from the outside. Here’s a better question – with all the raw talent on this team, why is it that the fullbacks are our most dangerous outside threat? That’s always bugged me a little.

Tactics aren’t necessarily synonymous with formations, in my opinion. Rather, it’s the combination of a formation’s responsibilities with the correct deployment of players. Mourinho likes to use a base 433 – which we should all know by now isn’t necessarily 4 across the back, 3 across the middle and 3 across the front. For Mourinho, it’s more like a 451 or 4321.

From last season, the three formations that Mourinho played are: 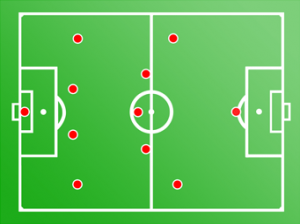 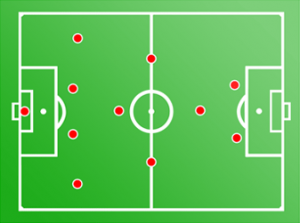 They were fine formations to use and they all had some common attributes. We defended well; we controlled the center of the field in most games and we used at least 4 midfielders, 3 of which were defensive, which means that we kept the majority of the possession in most of our games.

But we couldn’t use the width of the field very well in the 451. Last season, we had 4 players with experience as outside midfielders/wingers – Stankovic, who spent his whole career before becoming “Mourinho’s Summer 08 Project” as an outside attacking right midfielder; Figo, who has always been a winger; Mancini, who was a winger with Roma and Quaresma, who has played as a winger his whole career. We also have the very versatile Mario who is always asked to play some forward position besides striker. Despite all these attacking players, with all their experience as wingers, our best option for the outside attack was still our fullbacks – Maicon and Santon /Chivu/Maxwell. We did a little better later in the season by moving the wingers back a bit and closer to the middle but allowing the fullbacks, who were still our best option going forward from the outside, the room to maraud up the sideline to their hearts’ content.

This season Mourinho has decided that we are going in with a 442 rhombus from the start.

There will have to be a shakeup in the roster for this to work.

We don’t have Figo to play the winger/playmaker anymore. And we will need to displace a midfielder in order to accommodate another striker – which one? Also, what do we do about Santon? Is he our best option at left fullback? Is Zanetti still? Which combination of midfielder goes best with the 442? Does anyone actually think that we have seen the last of the 451 or the 4321?

I am going to get killed for this one, but the notion has to be faced sometime.

Just for laughs, my 4321 with the current roster

And I will leave you with some vintage Zanetti: