Share All sharing options for: On Your Marks, Get Set... 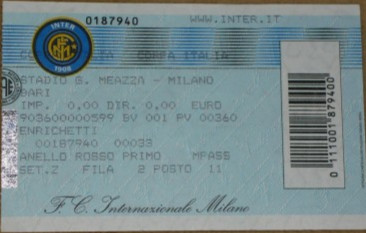 Well, the preseason is over and the real thing is poised to begin; Inter take on Bari in our season opener in less than a week now. Inter have not had the best summer campaign, that loss to Chelsea was particularly ugly, but the team is in flux and a few growing pains are to be expected. As the mercato season winds down, Inter still find themselves one midfielder down and few too many on the roster. I find that maddening. I would like the roster finalized so we can all stop worrying and get down to playing. I think Quaresma has shown us that joining at the end of the summer does not bode well for the next season. At least we won our last pre-season friendly. Oh, and Cambiasso will be out for a few weeks with a knee injury - recovering from surgery is not the best way to spend his 29th birthday. Poor guy.

We might as well start with the good news: Inter beat the Bahrain National team 0-1 with a goal from (get this) MANCINI! Yep, after stating that he would not leave Inter this summer as he wants to show everyone what he can do, he finally did something! And with his huge forehead no less:

After the game he said: "I have worked intensely all summer to show that I can still be useful and that the real Mancini certainly isn't the one of last season."

As for the rest of the game, try as I might I cannot find any more highlights. If you are really interested, you can read the live commentary from the game. All I can really gather from it is that most of the attacks originated in the midfield and Quaresma saw a lot of the ball.

According to Mourinho, the game was good practice for home games, saying: "We experienced a situation that will occur frequently at the San Siro -- playing against opponents who line up 11 men behind the ball." 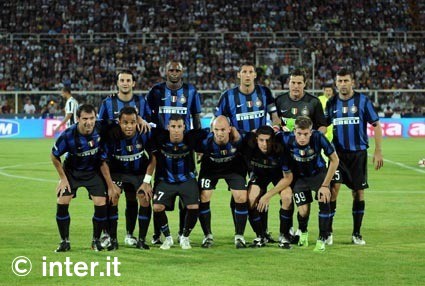 This was Cuchu's last start for 4 to 6 weeks.

For those of you who dont know (how could you not know?!), Cambiasso was injured during our game with Juve for the Trofeo TIM. He was diagnosed with a a lesion of the external meniscus in his right knee. He has undergone arthroscopic surgery and the operation was a "complete success."

It is thought he will be out about a month and a half, so wont return until somewhere towards the end of September. Looking at our schedule, that means he may well miss six games: Bari, Milan, Parma, Cagliari, Napoli, and Sampdoria. Milan and Napoli will be particularly tricky without Cuchu.

Cambiasso's injury also means that Vieira will likely stay at the very least until Christmas and that Inter will have to step-up their efforts to land a new trequartista. Stankovic (who usually plays that role for us) is our best Cuchu substitute, but if he is needed farther forward, that leaves Vieira as the next option. Mou tried Patrick out in Cuchu's spot for the Bahrain friendly and Baresi said after that match:

"Without Cambiasso in midfield we have deployed Vieira, who has done very well. Now we have one more week of work to decide who to use in that role during the first day of the championship. Also Quaresma, as an internal [midfielder], moved well."

Speaking of options, another interesting development is that Krhin has gotten more play time. He was brought in both during Trofeo TIM and for the second half of the Bahrain game. Now, it could be that with Cuchu out, we are desperate for midfielders, or, it may be that he has managed to impress Mou. I haven't seen the Bahrain game and only watched the Tropheo TIM on a tiny little feed while at work so I dont have much of an impression of Krhin. I suppose the real proof will be if he is allowed to play for Inter in a real game (ie Serie A or Coppa Italia).

Here we are, half-way through August . (How soon we forget. Maxwell also left. I have flushed Ibra from the bathroom of my heart so he doesn't count.) There were nibbles for Mancini (who turned them all down), Obinna actually had a place at Napoli before he screwed that up over image rights, Rivas will never leave, while Burdisso may end up at Roma yet. Vieira had at least one concrete offer (from Birmingham) which he turned down, and may have gotten a couple more before the month was out (Marseilles was maybe interested). As I said, he looks set to stay now. As for the others on the sell list, there is still interest in Obinna from Everton and now Genoa. Roma want Burdisso on loan but he wants a permanent move (at least if you believe Goal.com, that is).

As for our desperate attempt to fill the gaping hole in our midfield, we still have a big fat nothing. Sneijder is still supposedly our first choice (whether he likes it or not). Apparently, Inter are ready to offer Real Madrid 7 million euro now for Sneijder on loan with a 13 million buy-out at the end of the season. Real have countered with the idea of 9 million now and 9 million next season and we take him now - no loan. Inter's idea of the no-loan option spreads the 18 million euro payout over 3 years: 9 now, 6 next year, and 3 the year after that. Now, the only problem is how to convince Sneijder to leave Madrid?

I will leave you all with this little hors d'oeuvres to whet your appetites: