First game of the season and we start slow… as usual. Impressions? We need to figure out how to shoot on target and who has to cover where, when. Inter players of the match: 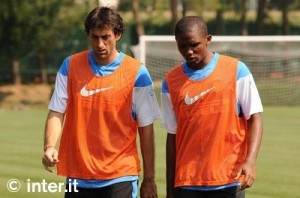 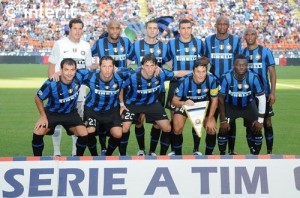 Cesar: Julio did okay with what he had. He wasn’t tested very much and the goal really wasn’t his fault as Kutuzov was all alone and had a free shot. 6.5

Maicon: Maicon played well going forward but not as well as we expect coming back. He was caught too far up several times. I remarked early in the game that I had figured out Bari’s tactics – 10 on defense and then scramble as many as possible to the counter attack. Maicon should have figured it out before me and played back a bit. But I will cut him some slack – he didn’t have anyone switch with him as he usually does so that Inter are covered when he does go forward. 5 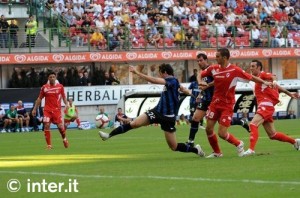 Lucio: He played exactly the way Mouinho wanted him to when he came to us. He pushed up and he often made the first pass to start the attack. On the goal he was too far forward and no one covered for him. This is something that the team is going to have to figure out without Cuchu. 6

Materazzi: I thought that Marco was more or less invisible the first half. He was booked for a two footed challenge that he actually won the ball on and got very little player. On Saturday, Nesta wasn’t even whistled for a free kick when he did the same thing and knocked the player into next year. This doesn’t bode well for us next week. I also think that against a team that we all knew was going to try to counter us, we could have used Cordoba’s speed from the beginning. 4.5

Zanetti: Javier was burned early from Alvarez. In the second half he played a little smarter. I give him high marks for adapting, but I think I would have played him in front of Maicon, myself. Some might have wanted to see Santon here, but I would have been just as happy to see Chivu. 5.5

Muntari: Invisible until he was subbed out. He can sulk about it if he wants to, but he wasn’t running and he wasn’t passing very well either. 4.5

Vieira: I thought that Vieira played ok until he did his best Rivas impersonation. He was okay after that until he was subbed out at the half. 5 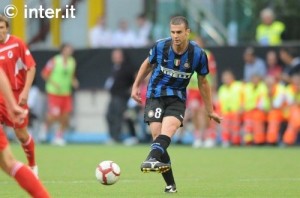 Motta: I thought that Motta had a very good 1st half, missed excellent chance for a goal notwithstanding. He was active and he was passing well. In the 2nd half he played ok, but he was just passing the ball from the back really. I think that I am getting the feeling that Motta is the kind of player that needs to be around the ball otherwise he falls to sleep a little. 5.5

Stankovic: This one is hard for me to rate. I thought that he played ok, overall. Once he tried to drop back, I think he was a little lost. He’s not really a defensive player, nor a central player, really. I think that he’s about ½ to blame for the goal, but I am more interested in sorting out the defensive responsibilities than blame someone. 5

Milito: I think that Milito played a good game. He was always in the opponent’s box and sooner or later he was going to get fouled. I thought that he was fouled – he was kicked in the boot with no attempt made on the ball - but I think that most refs would have let it go. Milito also forced the ref to make a decision one way or another. The rest of the game, he worked his ass off and he missed one of the 3 sure goals that I thought we had today. 7

Eto’o: This is a hard one for me. He worked hard and he took his shots, but he missed two excellent chances that he probably should have put away. On the other hand, that was a great penalty that he took. P.S. I can't get over how short he is in photos. He looks so much taller when he's playing. 6.5

Cordoba: I thought that he came on too late. I would have started him – like I would against Chievo, for example, since they also play a 10-1 formation. He wasn’t at fault of the goal; in fact he’s the one that angled the first guy to the side, covering for Maicon who was caught too far up. On the other hand, he didn’t exactly set the world on fire either. 5 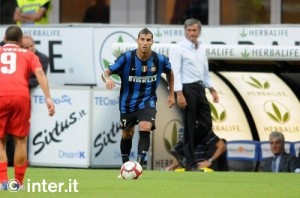 Quaresma: I thought that Ricky played well. He received the ball and either pushed forward or distributed… which is his job. He missed a couple of crosses, but then he made a few passes that I thought were pretty good too. Towards the end of the game he almost fed Eto'o a beaut. He even took a shot with a header. A decent effort, I thought. 5.5

Balotelli: Here’s the thing. I thought that when he went in, our play got incredibly positive. I would have stated him in place of Deki. Despite not covering for Maicon when he went forward, Mario had a good game and was a shove in the box away from having a chance at a header (5:08 on the highlights). 7 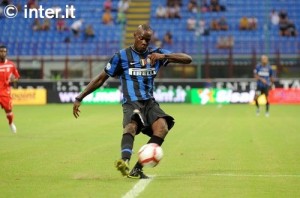 Overall I thought that we played better than Bari did, but not nearly as well as we can. When teams play the ol’ 10-1 formation and try to catch us on the counter, like Chievo did last season, it makes everything compact and hard to maneuver. You might recall that we had some difficulty in games that we should have won easily at home last season because teams like to use this tactic against us. It’s damned annoying but it’s the way these things are done.

However, not all is doom and gloom. I honestly think that one of the improvements from last season was our passing in the midfield. When Eto’o arrived there was some concern that we wouldn’t be able to make chances for him because our midfield had too many clod footed defensemen. But today the team was able to pass the ball through the midfield left, right and center to create pressure. 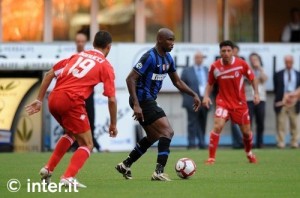 Speaking of pressure, there were times that the Bari defense weren’t able to get out of their own end, because of the pressure of our forwards. We created some chances from that pressure.

Bari had two real chances to score. Unfortunately, one of the pluses to the counter is making high percentage chances. Our downfall on these two exceptions to an otherwise pretty good defensive day was that we were attacking too much. We were caught forward with too many players and not enough people rotating back to help out. It’s an organizational problem and not a talent problem so there is hope that it can be worked out sooner rather than later, I hope. Of course one would wonder why it wasn’t already worked out. It seems that Cuchu’s injury really threw the management for a loop.

Look it was a draw, which around these parts lately means that we get disappointed, but it could have been worse, I guess. I just wish I felt more confident in the squad. There are too many new people and I am just unfamiliar with some of them.

Speaking of next week: 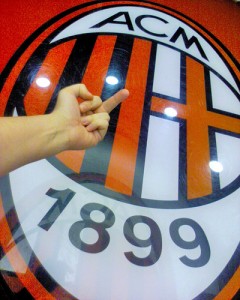 I don’t have high hopes since we are Cuchu - less. Kind of like last season when we had all those injuries to the back line.