Time to Get Your Derby On

Share All sharing options for: Time to Get Your Derby On 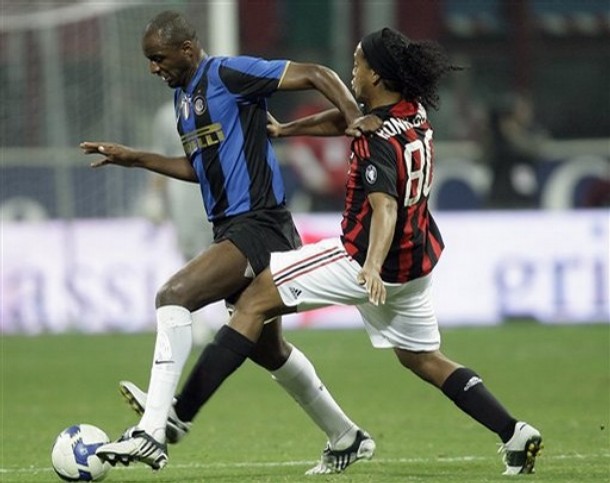 I know it has been hard to focus with the Champions League draw and all this Wesley Sneijder will-he-wont-he drama, but we have a freaking derby this weekend! Yep, it may be only Matchday 2, but we are already looking at our first Derby della Madonnina of the season. So, lets put all this other stuff out our minds and turn to what is really important: taking full points from AC Milan tomorrow.

Last season, this match did not go so well for us. Inter lost 1-0. For those who are interested, here are the highlights. CAUTION: Includes footage of certain players who are dead to me.

Statistically, Inter are just as likely to lose this tie as to win it: of the 86 times Inter has met Milan away in league play, we have won 31, drawn 24, and lost 31. Inter has scored 119 goals while allowing 113. Clearly, throughout the years, Inter and Milan have been pretty evenly matched. Of the games that did not end in a draw, 66% were decided by a single goal (41 games). Still, usually goals are scored somewhere - only five games ended zero-all. So, if history has anything to say about it, this game will be tightly contested, goals will be scored, but, in the end, it will be decided, if at all, by a single goal. 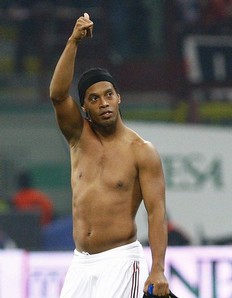 Luckily, there is not a whole lot for me to do in this section - Gianfranco has that covered over at the Milan board.

Milan won their first match and new coach Leonardo has the squad's tails up. For the first time in what seems like a very long time, Milan believe in themselves as a team. Confidence is heady stuff and it makes them dangerous. Pato scored two goals in the game against Siena and will undoubtedly be looking to score more. Ronaldinho is not quite the slouch he was last year - although he isn't the wonder he was at Barcelona either (knocking wood).

This will be more than likely be Huntelaar's Serie A debut, though La Gazzetta does not think he will start. It will also be interesting to see if Leonardo takes Berlusoni's advice and play Ronaldinho and Pato up front with Seedorf behind them.

I dont know if this is entirely relevant, but I found it interesting: Dunga has not called up a single player from Milan. For a team that has been so closely linked with Brazilians these past few years, it seems almost unthinkable that they will not be represented at Brazil's World Cup qualifiers against Argentina and Chile. Now, this could be because Brazil are already leading their group so dont see the need for Ronaldinho or Pato, but the conspiracy nut in me says it could also be that Leonardo has had a quick word and convinced "them" to leave his strikers home to train. 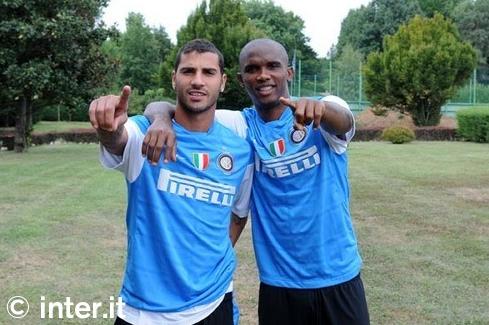 Marco and Quaresma will watch this game from the stands as neither are part of Mourinho's derby plans. I think it is interesting that Krhin and Mancini get the nod over Quaresma, I wonder if that is to help Genoa make up their minds already. Suazo is also a bit of a surprise, but Mou said that he brings some needed pace to the squad. I haven't really seen him play since he went to Benfica, hopefully they did him some good last year.

As for the rest of the squad, La Gazzetta thinks that Santon will start in the midfield. Mourinho was asked about this possibility in the press conference today and he used the opportunity to talk about the lack of privacy at La Pinetina, saying:

Whoever wrote or said that is one of those that I saw in the trees. He was very far away and I did not know who he was, they saw the work of the team .... they saw... (Smiles). ... The fact of spying is very common in the social world [by this I think he mean paparazzi], but in the world of football it is absolutely new for me. That's right, journalists and photographers hiding in the trees are a new thing for me, but now that I discovered it, I do not much care. When I tried Santon in midfield I knew that two days later, it would emerge in the press and whoever asked this question knows that it is not an innocent question: he knows perfectly well what I mean.

Mourinho also once again expressed that this squad is new to each other and will need time to properly settle. He pointed out that, had Sniejder's transfer come through in time for him to play (it didn't, but has since), that would mean 5 out of 11 starters would be new to the team. That is a lot of turnover for a squad and it is true, they will take time to learn to play together. As it happens, Sneijder was not convened and will not start really training with the team until Monday.

As for who is really the favorite to win tomorrows clash, Mourinho quite diplomatically replied:

I do not believe my team is less than AC Milan and I will take on the game with the same confidence ch I would have had Milan lost against Siena and we and we had won 4-0 against Bari. Seriously speaking, I believe there is not a favorite team for this match.

Alright, so I think that this is all I have in me today. I am sorry for the brevity of the post, especially in front of such an important and emotionally-charged game, but... well... stuff came up. Take my word for it - you dont want to know.

Lets go out there - play our little hearts out - and beat them senseless!