Share All sharing options for: Our story thus far... 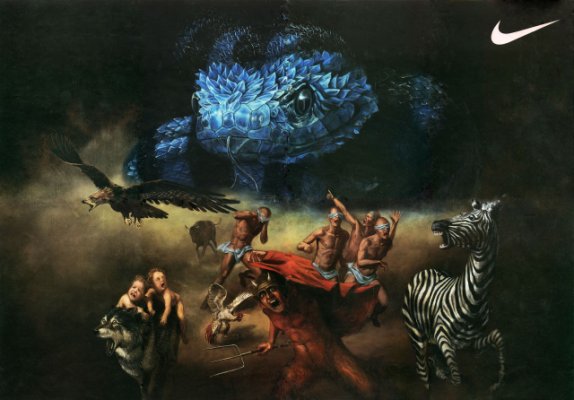 Considering the fact that Inter doesn’t have another friendly until the SuperCup in China against Lazio on Saturday – a game that I hope we have the proper mentality to win – I would like to spare a thought reviewing Inter’s transfer market as a whole.

I think that so far this transfer market has been very good for us because we are being extremely smart with our money and purchases. We have cleared out players for whom we don't have any plans and we have bought players to fill specific gaps. We have also been very careful about how much we spend and how much we have coming in. 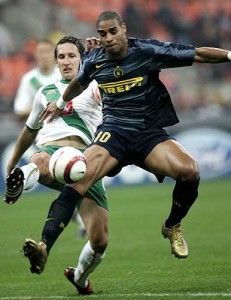 The first thing we did was clear out Adriano. I don’t write this because I don’t like Adriano as a striker, quite the opposite, in fact. I thought in those early days when he was teasing us with his obviously huge amount of skill that he was going to go down as one of the greats. He can pass. He can shoot. He can poach or he can dribble. What also became increasingly clear is that he can’t work hard and he can’t control himself.

So he needed to go. And this one wasn’t easy for me, but after this season’s antics and obvious drop in form/concentration, I have no rational problem with it – even if it means that a player that I had invested so much hope in disappointed me. Really, it’s almost a relief to have it done with.

We didn't resign Cruz, about whom I and Johonna had already made our feelings known. To reiterate, I liked him a lot – and it’s rare that I say this – but not just as a player. I think that, like our president and most of the people he surrounds himself with, he’s a genuinely nice person.

We didn't resign Crespo, another player that I held in high regard, if not on as personal a basis as Cruz. I have a lot of respect for Crespo. He was a world class player, he may still have a little left in the tank and I think that he will play well at Genoa for at least a year. But, it was finally time for him and us to part ways. 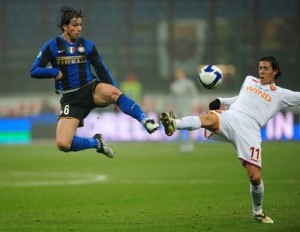 We transferred Maxwell out to Barcelona, which was just as well. Maxwell had become an issue both defensively and with Mourinho. Besides, we have 5 players who can play fullback – four of which are National teamers - currently on the roster already. I thought that Maxwell could be valuable as a midfielder as well, but it seems clear that Maxwell wanted to get paid more than he was worth. The squeaky wheel got replaced and in this case, rightly so.

The last player, as of this writing to be transferred out was Ibrahimovic. Out of respect for our mourning colleagues, I have, on purpose, written very little (at least compared to how I actually felt) about my personal feelings regarding Zlatan and how this transfer happened. I can put up with Zlatan’s on field antics during the season, he's not as dirty as Zebina or as spoiled as Mexes/De Rossi. But his close season antics bug me no end. It did bother me, for example, that Zlatan/his scumbag agent was again making noises about leaving after his raise from an already incredible wage last summer. 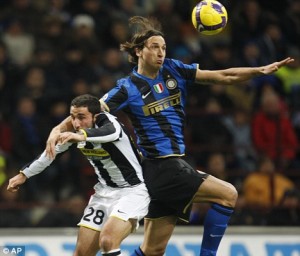 And Zlatan was a hard player for me to form an attachment to. My father never let me forget that he was supposed to be a Milan player – that he changed his mind after Milan’s uncertain Champions League future. Plus, he never seemed to appreciate his teammates. Mario may not be the nicest guy around either, but the 18 year old playing for a big team like Inter doesn’t deserve to get a public tongue lashing just because he didn’t put the ball right at Mr. OffTargetAlltheTimeHimself’s feet. It’s in my mind that he wasn’t the greatest role model of a professional that Mario could have, either.

None of this is to say that I don’t think that Ibra is a great player. He is, hands down, one of the greatest of this generation. He is phenomenal, no ifs, ands, or buts. I just never become as attached to him as I have to other players on the team. And it doesn’t really surprise me that he’s gone so willingly, eager even, either. 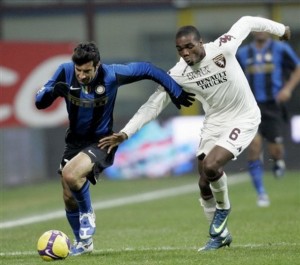 Figo was on the team a relatively short time, but the outpouring of affection for him during the presentation of the Scudetto says louder than I can how much the team appreciated him. He was reliable when called on and performed as any professional would have. Plus, he pulled our fat from the fire quite a few times over the years.

It’s hard to say if Jimenez has great promise at this time of his career. It could be that the quite a bit less cerebral English game will suit him better.

Acquafresca, Bolzoni, Bonucci, Meggiorini, Fatic, Biabiany are all players that, on paper, left Inter this summer. Some might question the trade-off of Acquafresca and Milito, but I don’t, really. Milito has already proven to be professional and hardworking. Anyway, youth players have other uses other than playing, and that is to use as trade makeweight.

So, I don’t have any real problems with those players we have transferred out. I acknowledge here, as I have elsewhere that I think that Ibra will be hard to replace as a player, but he will be easy to replace as a symbol of the team, as he really wasn’t one for me, anyway. 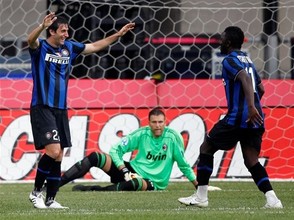 I have already remarked in other places what I think of Milito, Motta and Lucio. To sum up they are talented, hard working and they have the potential to be a good fit.

Kerlon and Coutinho are subjects for another day, perhaps, as they are part of the team, but aren’t really. Kerlon is a forward, probably more of a winger and Coutinho is a very young Brazilian midfielder. Neither, I think, will see much time on this team this season.

Arnautovic, Deco, Sneijder or van der Vaart, which ever one, if any, comes to Inter aren’t here yet as of this writing, so I’ll leave this area blank. As of this writing, Real Madrid and Inter had reached an agreement for a loan deal w/ redemption for Sneijder (4 million Euros/18 million Euros). The player has not agreed to anything so, as of this moment, there isn’t a deal in place. 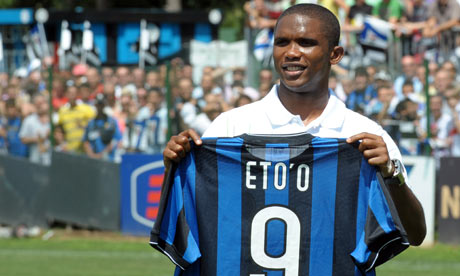 This leaves us with the very formidable Cameroonian, Samuel Eto’o. I don’t really want to get bogged down with too many stats or comparisons, really. Any comparisons between Ibra and Eto’o are as apples to oranges. They are different players, which I understand can be worrying as there was a comfort level with Iba. The bottom line is this, if the team of Eto’o/Milito/midfield can work, then we are going to do well. Like really well. Like really, really well.

Will we get service to him? Yes. Will he have chances to score for us? Yes. Will it be the same as at Barca? No. And that’s what people are going to have to get their heads around. This is not Barca. But, “not Barca” doesn’t mean “not good”. We are a more defensive team and we play a tougher, if less elegant, brand of football. That means that we will collect the ball and move it efficiently up the field. This also means that Eto’o and Milito will get chances.

As far as the business end of the market goes we are far ahead of the pack. Milito and Motta together cost 16 million Euros in cash plus 5 youth players – which is a bargain really. The around 4 million for Lucio was paid for by the Maxwell transfer. Not only was Eto’o paid for by the Ibra swap, but he brought around 45 million with him.

In millions of Euros, all figures guesstimated:

According to these figures, even if Inter grossly overpay a transfer fee and salary for an attacking midfielder, then they still wouldn’t have spent a dime of their own money on this mercato and have actually decreased wages from a season ago.

To wrap this (too?) lengthy write up, I figure that we have 2 more low cost buys left in us: Arnautovic (which I don’t really see the point in having, really) and a possible loan for an attacking midfielder.

Then it’s on to Phase Two.

Allow me to leave you with this: 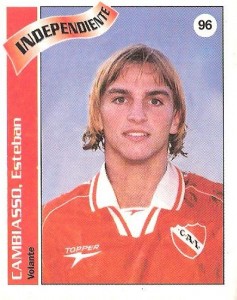 PS. When I was at Gillette stadium on Sunday, at half time they gave me a thrill and played this little song over the PA. However, I hadn't seen Pazza Inter with 07-08 highlights before, so if it's new to you, enjoy: