Karma, Karma, Karma
Second game of the season and we continue to follow the trend set last year: First game draw, second game win. Here’s the difference from last season: last season we got two fluky goals to beat Catania who finished 15th. This season we soundly beat the team that in all likelihood will finish in the top 4 this season. My Inter player of the game: 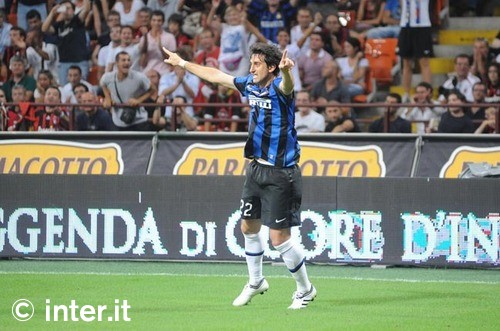 Look, here’s the stat you need to know, besides the score:

Inter had a shot on goal that forced a miracle save in the first 6 minutes, and Milan forced Cesar to make his first save (a nice one, btw) of the game in the 60 something minute.

Cesar: Julio wasn’t called to shot stopping duty until deep in the second half. However he intercepted several crosses and kept Milan from attacking deep on the end line. Besides which he displayed quite a few nifty moves schooling some folks as he helped bail the defense out of trouble and keeping possession. His score would be higher but Cesar muffed a few catches, as he is prone to do when he doesn’t have any work to do. 7

Maicon: Maicon played the first 20 minutes as though this was still the Bari game and this limits his score somewhat. Then he woke up and discovered that he was still Maicon and he was still playing for Inter (for this season, anyway). The rest of the game, he realized A.) That there was no threat to his side and B.) Javier had his back. Essentially, he could maraud up and down the right flank at will. When Leonardo put Seedorf on his side, Maicon didn’t limit himself to the flank but cut in front of Clarence at will as well. 8

Lucio: Lucio played a little tentative at first for a couple of reasons. First, the 20 opening minutes were a little tense as Milan really tried to stick one in early to shock the team. Second, he hadn’t played with Samuel yet this preseason that I can remember and that led to some weird moments. However, once they kind of figured out who’s doing what, they made an awesome pair. Lucio went forward and cut in front of several passes that were supposed to be threatening and he showed a lot of skill on the ball. He also had a hell of a shot that really had a chance. 7

Samuel: I think everyone knows how I feel about Walter. The Wall was great today. He was the deep man in the pairing and he swept up loose ends and knocked some forwards around. He was just what the doctor ordered today. More time working with Lucio and these two could be frightening. By the way, is there a more intimidating pair of men in the stadium than these two? 7

Chivu: In some cases, Chivu was the weak link of the back four. Some might wonder why Santon wasn’t used, but more on that later. Chivu is a savvy vet who has technical skill on the ball and more athleticism than the average defender. He needed it all to fight back against Pato and Huntelaar. He didn’t always do a clean job of it but he put himself in-between the ball and the goal. And he didn’t take any shit from Pato either. 6.5

Zanetti: What a difference a week makes. In the beginning of the first half, when Inter was conservative to feel out the Milan attack, Maicon stayed back to play defence while Zanetti played straight midfield. Once everyone got a little tired and the right side cleared up, and Maicon started his overlaps, Zanetti stayed home to watch Maicon’s back. He also made some superb passes and interceptions. Zanetti’s work may be underrated, since he doesn’t score, but from a tactical point of view, he’s almost invaluable. 7 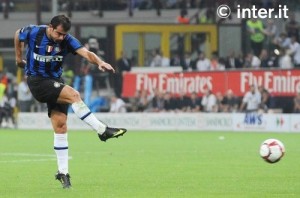 Stankovic: it seems like Deki and Motta switched often as at different times both would come through the middle, or both would show themselves at the touchline. It’s weird to remember how good Deki is as an outside player. He played a hell of a game. And he scored an absolute rocket of a goal that should send all Romaniste who saw it flashbacks of last seasons 4-0 game. 7

Motta: I thought that Thiago played especially well today when he moved through the middle of the formation, like when he scored his goal. He might the player that can give Cambiasso a break – and keep Patrick off the field. I thought that he had a monster of a game. If he has a muscle problem, this is the time to have it, as there is an international break coming up. 8

Schn… Schmujcko: Sorry, but 1 game isn’t going to do it. I have a long memory and a vindictive soul. He’s going to have to do a little more to woo me. Anyhoo, he played a fantastic game. With him in the lineup we have a balance that I don’t think we dreamed of in the last 15 years. What I really like, is that if he was open outside the box, he just took a shot. He’s got a nice shot, too. Free kicks could have been a little better, but I am not going to quibble. It looks like we found someone to feed the Eto’o/Milito beast. 8.5

Milito: When Diego was at Genoa, they thought that he was a support striker. Here at Inter he’s a striker who also drops back to help out on D. He also makes sweet passes and runs his ass off tracking down passes. 2 games in, I am calling this guy a bargain. Best player on the field today. By the way, that penalty was awesome. 9 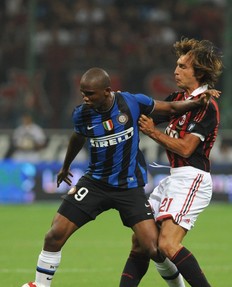 Eto’o: I am beginning to see what Eto’o brings us. He can shoot, we know that. But what he brings is fear. For the second game in a row I noticed that there were 2 players shadowing him all over the place and he still springs the trap and forces Gattuso to clothesline him down in what should have been the world’s most obvious red card. Nevertheless, he scared the daylights out of the Milan defence and opened spaces for Milito and others. Besides, he came all the way back to play just in front of Maicon in spurts in the second half. 8

Muntari: Came in for Motta and played very well. It was Muntari’s pass that found Deki. The midfield has an incredible depth to it at the moment. 6.5

Vieira: Subbed in for Schmujcko. Played well, but wasn’t required to do much, and fulfilled those expectations. Flubbed a ball just outside of the Milan area, and I started having Udinese flashbacks. The more we keep this guy on the bench, the happier I will be. N/A

Balotelli: Came in late and played okay, but he didn’t have the time or the duty to do much. N/A

Mourinho: Mourinho told the world that he thought we were ready to win this game on Friday. He made a good line up and was smart not to sub until he had to. The team looked organized and ready to play. 8

The first 20 minutes Milan attacked in waves, but we still had better opportunities to score in that period. There wasn’t, for example, a Kaka standing offsides waiting to start a counter attack, this time. Ronaldinho embarrassed himself with the flop in the box that Deki rightly gave him grief for. Gattuso’s actions just mystified me. He was yelling at Leonardo who may have been slow with a sub, but Gattuso should taken himself off long before it got to that. Gattuso should have actually been expelled for his clothesline but the ref will claim that Nesta was 2 feet behind Gattuso so he couldn’t be the last man. Realistically, Nesta, 10 feet away, was never going to get there and the ref blew it, as usual. Btw, does Flamini own a shower? Man, does he look ripe... 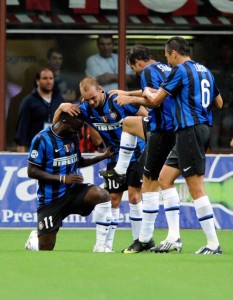 Once we were able to gain control of the possession it was all over for Milan. We dictated play for the last 25+ minutes and attacked the Milan goal from short range, long range, from the right and the left. By the end of the half, the Milan defence looked shell shocked and Storari had a glazed look in his eye. The second half was the Shell Game and keep away.

Look, this was just one game and it means relatively little in the grand scheme of things. However, Milan is still a top 4 team in this league and a win away is a good thing. The fact that we both reside in the same city is just a great bonus. If we want to measure ourselves early on, I have to say that we look quite strong if we can fix some stuff in the back and get healthy.

Personally I think that this game puts Leonardo on the hot seat, but he doesn’t deserve to be there. It was probably a mistake to promote him in the first place. But, their management had the chance to take the Kaka money and bring in some new guys and really add quality depth. I don’t blame them for trying to balance the books, but were deals to be had. Oh well, I bet they go on a spending spree next summer, accounting be damned. There is no way they can let this stand without trying to increase ticket sales.

The only question that remains is why Santon wasn’t used. I think, and I have no evidence of this, but I think that Mourinho wants to ease Santon into the squad as he did last season. Add a few more games onto his plate this season to gradually move him up into a useful sub – like Mario – that sees a piece of every game, before getting him into the starting lineup. Our next game is probably a good game for some bench players to get some reps, all due respect to Parma.

I just wanted to add this in here. Some people were talking about Milan going up +5 on Inter this past week. I am going to advise something here. Just ignore pundits/people/”journalists” that talk about the table and the table itself until after Thanksgiving. According to Football-Italia, we should have been killed today because we had the nerve to draw last week. These people think that this season is a sprint. It’s not. It’s going to be tight and it’s going to be nervy. Anyone who thinks that they can predict the next 36 weeks is fooling themselves and you if you listen to them. Just enjoy the games.

Next week: Is an international break I think. The week after that will be Parma.