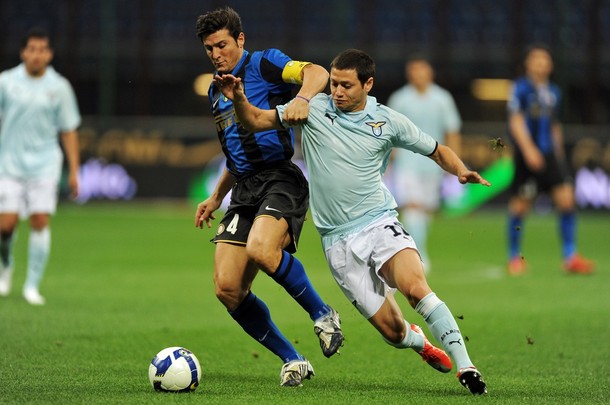 What: Inter v Lazio, Supercoppa Italiana
Where: Bird's nest stadium, Beijing, China
When: Saturday, August 8, 5am pacific (ouch), 8am eastern
How to Watch: If you are in Britian, apparently it will be broadcast on ESPN. If you are in the US, find a stream ("MyP2P, Justin.tv, Rojadirecta, Ustream, and ATDHE.net).

Here we are, already at our first "real" game of the season. The game has been moved to China, and, while I know Inter have been courting that market for some time, it means the squad is bound to be a bit jet lagged. Add that to all the recent personnel changes and developing tactics, and it makes what should feel like a shoe-in seem a bit more like a nail biter. Even worse, Lazio are now sporting our good friend Julio Cruz on their bench and you know he wants some payback. This game is going to be a corker - too bad they are making it so hard for us fans to watch.

Overall, Inter have a pretty good record against Lazio. Of the 151 times the teams have met (in all competitions), Inter have won 61, drawn 56, and only lost 34. Our Supercoppa record against them, on the other hand, is dismal. Inter and Lazio contested this cup in August 2000. After seven goals, including ones from Deki and Mihajlovic (for Lazio!), Lazio beat Inter 4 to 3. I am sure they would be overjoyed were this to happen again. I, on the other hand, am looking for some payback!

Last season, Inter won both ties against Lazio (2-0 at the San Siro, and 0-3 at the Olimpico):

Looking at the line-ups for that game, though, five of the Inter squad who took part are no longer with the club (Ibra, Figo, Cruz, Crespo, and Jimi). That is a whole lot of turnover. Even Mou is slightly worried about this, saying:

"Compared to last season we are a new team with new men and a new style of play. We have changed four players who are considered starters, four out of ten means 40% of the team. In this situation, the more time we have to work, the better, because the players get used to playing with each other and everything is more natural when you repeat exercises. But we do not have time so we have to take advantage of all our qualities to win this match and also the next ones. I am expecting a difficult game because Lazio have showed great qualities in recent years, and they have a new coach so we do not know how they will play. But it is no problem for us how they play or who plays for Lazio. We have two solutions with the same principles of play and we have tried them and we are ready to play." 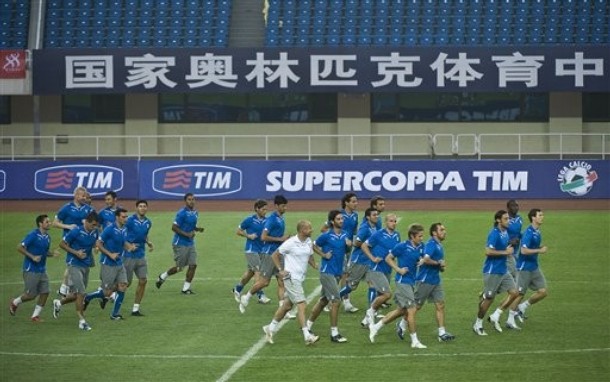 This section will be short, I have not really been following their preseason. Lazio have only played a few friendlies against some lowly opposition, but, for the most part, they trashed them (13-0, 1-1, and 0-10). In addition, they are keen to win this cup, Matuzalem even went so far as to say:
"I consider this match to be very important, I hold it dear. It's a final. We're playing for a trophy. It's surely one of the most important matches of my career."

Of his career! That is a lot. I had no idea we were so important. They also now have Julio Cruz. This time, when he scores that winning goal in overtime, it will not be for us. Ouch, that huts a little.

As for formation, La Gazzetta thinks it may go a little something like:

Aside from preparing for the game, there has been some real madness around the club. Players are not happy plus, apparently four people just got busted for helping the Camorra in a failed take-over bid. I tell you, it is pure pandemonium. In the end, though, they have a new coach, a new-to-them Cruz, and all the motivation in the world. This one is going to be tough. 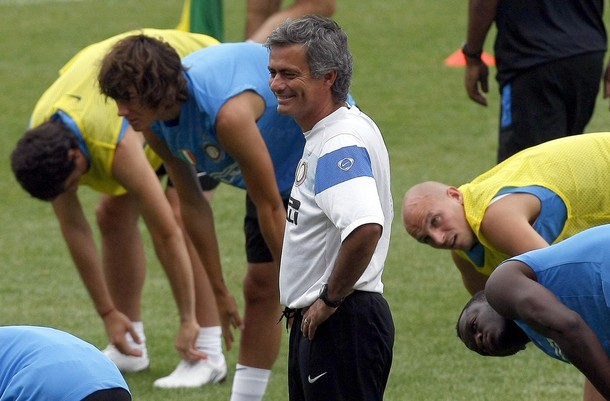 Well, we all know already who Mou has called up:

Note: No Obinna and no Belec. Apparently, Mou is a mite angry that Obinna scuppered the Napoli deal. I think he will make Obinna live to regret not leaving when he had the chance. As for the rest, it is pretty much what we all expected.

While in Beijing, Mou has been messing around with a 4-3-1-2 employing Stankovic behind Eto'o and Milito and a 4-3-3 that also includes Balotelli. What do you be that we see a little of both tomorrow? Whatever the final formation (which I will read about after the game - no 5am for me!), lets all cross our fingers that Eto'o begins his long, illustrious stay with Inter by bagging a goal (or two). Milito could use one as well.

Our keepers have formed a gang! Look at how they take on the rest of the coaching staff: 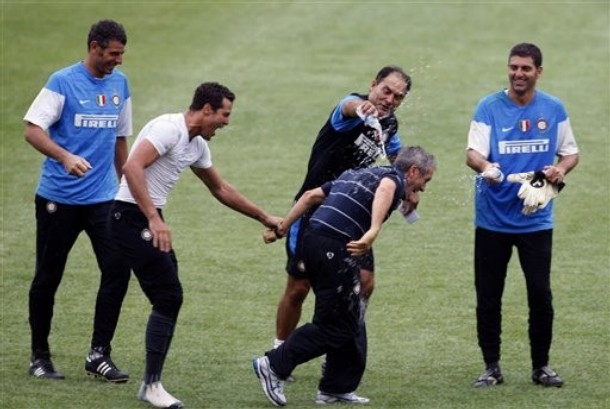