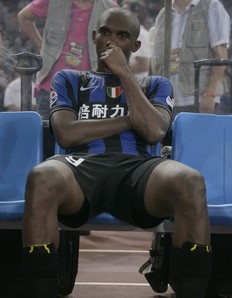 So we didn't win. Meh. I see it as a half empty / half full kind of deal: the squad played well as a team with good movement and pace (half full) but they got one more goal than we did (half empty). I am not going to get into which was the better team or who played better football, because, at the end, the only thing that matters is they won and we didn't. Am I disappointed? Yes, a bit. But I also am happy for Lazio and what they have achieved. It has been a rough few years for them and maybe they wanted (and needed) this trophy more than we did. Besides, have you seen Lazio's new jerseys? They deserve this win if only to make up for that horror they will have to wear every week. Yikes.

We are moving into an international break and Inter have twelve players going out to play for their countries:

Mario Balotelli to St. Petersburg for Russia v Italy (U21)

Nicolas Burdisso, Diego Milito and Javier Zanetti to Moscow for Russia v Argentina (poor Samuel, he never gets calle up)

Most of them left directly from China to join their teams. In addition, Mourinho has given a few days off to Patrick Vieira, Francesco Toldo, David Suazo, Dejan Stankovic and Rene Krhin.

Yep, just when you thought we were finally finished with summer friendlies, two more pop up.

First, there is the Trofeo Tim on August 14 in Pescara. For those of you who dont know, the Trofeo Tim is a wacky three-way game between Milan, Juve, and Inter comprised of three 45-minute periods that Juve have never won (this could be their year, though). Considering the grueling travel schedule most of our starters have, this could be one that gets away from us.

Then, Inter play the Bahrain National team on August 16 in Kapfenberg, Austria. After that, all we have to do is buckle down and prepare to beat Bari on opening day.

Oh, and find a &*$&%#* TREQUARTISTA! Van der Vaart seems to be the favorite now.