Matchday 5 and we are still in the opening stages of our hellish tour that started last weekend at Cagliari.

By the way, has anyone else noticed that by next wednesday, Juventus will have 2 more days of rest than us, Fiorentina and Milan despite all 4 of us having the same League and Champions League commitments?

A big coincidence, I am sure…

Anyway, we met Napoli today at the Meazza and the two big money signings from this summer continue to pay off as my Inter player of the match had 1 goal and nearly another: 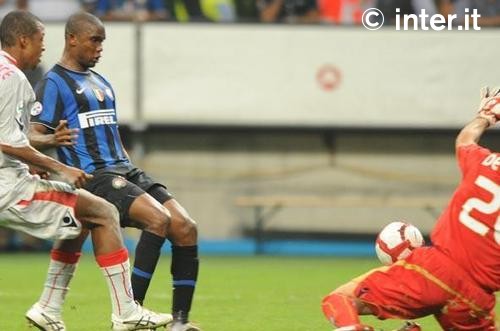 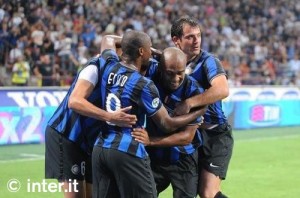 So far this season we have scored 11 goals and gave up 3. Despite what the Napoli Offsides says, I think that means that our attack is pretty decent.

Cesar: Julio wasn’t called to shot stopping duty often but was pretty reliable when called. He had excellent position and he was, as always, fluid and explosive on the save. The goal wasn’t his fault. 7

Maicon: This was Maicon’s best performance since the Milan game. He went forward well, as he always does, but instead of taking ill advised shot after ill advised shot he passed the ball to players who found themselves free of defenders as the defence tried to collapse on him. The improvement from the last game is incredible. 7 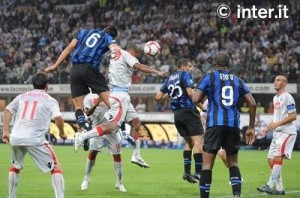 Lucio: Lucio wasn’t the intercepting fiend that he has been these opening games. He played it more conservative, obviously respecting Napoli’s forwards – which to me showed flexibility and smarts, either his or the coaching staff. Either way, he played very solidly and scored a nice goal to boot. 7

Samuel: Look, Napoli is an attacking team, obviously since they don’t have much of a defence. Lucio and Samuel both did well to blunt the attack, but both also went forward well. Samuel was unlucky not to score in the second half. PS, Maradona is an idiot for not using him on the National team, but I am not complaining. 7

Chivu: This was Chivu’s worst game this young season. And if this is as bad as he gets, then we are still sitting pretty. I don’t recall him going forward very much. He stayed back and mostly did his job, but it looked like Maggio had some room over there. But that’s all he did. Chivu looked lost during the goal. 6 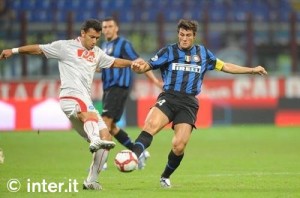 Zanetti: Zanetti did his usual covering for Maicon, and considering how much time Maicon spent in the attack today, Zanetti could apply for blanket status. He helped double Lavezzi when needed and was generally his solid self. He also stepped up and made sure that everyone kept their cool. 6.5

Stankovic: I like how Stankovic plays sometimes. He’s always a hard worker and you can tell that he always does what the coach asks of him, because he wears so many hats: AM, CM, WF, LM, RM. But there are days when it all comes together and he can attack – narrowly missing the goal right at the half – and he can defend keeping several Napoli midfielders, like Gargano, in check. 7.5

Cambiasso: How good a game did Cambiasso have? Let me answer with another question. How many times did you hear the name Hamsik, today? Yeah, I think I heard it twice and once it was to announce a bad shot. 8 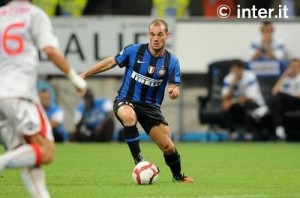 Wesley: He’s not Sneijder, yet. But he’s not Schmujcko today, either. Most people’s comments I read after the game didn’t think that Wesley had a good game, but I disagree for two reasons. The first reason is that we scored twice off of corner kicks. And if you had been around here for the last 2 or 3 seasons, you know what I think of Inter’s ability to make a decent corner kick. We never score off of corner kicks. So a player that can make them is a good addition in my mind. Secondly, he hustled his ass off in both ends of the field and still made very nice passes all with a knock from 2 weeks ago still bothering him (yes, that's why he came out). That’s all I want from my AM. 7

Milito: Yes, I know that his goal was a step offsides and that was unfortunate. However, the effort that he puts in every game… it’s just unbelievable. This is a forward that I can get behind and cheer, like I never had for Ibra. By the way, he has 5 goals in 5 games. 8

Eto’o: He’s the most dangerous man in football. That’s all there is to it. He’s a predator when he gets the ball. Worse, for Napoli, he poaches like no tomorrow. He nearly had 2 today and whenever he gets the ball my heart skips a beat. I cheer for Milito but I am enamored with Eto’o. When Wesley was subbed off, he basically became the AM and the CF. By the way, he and Milito have 8 goals in 5 games. 9

Muntari: Played head and shoulders better than he had against Barcelona. I don’t know if it had anything to do with Ramadan, but Muntari today looked like Muntari the Beast of last season. 6.5

Mourinho: The plan was simple. A quick look at the heat maps at ESPN.com shows that defensively the team shut down the wings and had Cambiasso shadow Hamsik a lot, which pretty much stifled the Napoli attack. Our attack was just too much for a 3 man defensive line. I mean seriously, 3 men against Eto’o and Milito?

I don’t want to belabor the point, but in the first half, with the game still in question we dominated Napoli the way we should have dominated Bari and Cagliari. It’s not hard to figure out that in the few days between the games Mourinho let his team have it with both barrels. It’s obvious that they were making up for a bad performance last weekend. The fact that Inter and Napoli have always had bad blood between them was just sauce for the goose, so to speak. 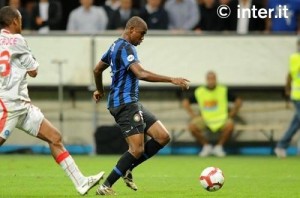 Plus, the choices that Donadoni made are still puzzling me. I mean, he chose to attack us at our home. He didn’t use Cigarini – who I thought was the player to look out for. And he played 3 in the back… against a team that has scored 8 goals in 4 games before today. It makes me shake my head, but whatever, it’s his job to lose.

So onward we go to the next game, on Saturday against Sampdoria who will most likely be trying to avenge their loss from today. Next week it’s back to the Champions League again.

Diego Milito carried off his second consecutive Sky Sport Italia man of the match award after the final whistle against Napoli.

"I wasn't expecting a start like this. I'm really happy," admitted Il Principe, who has scored five goals in as many Serie A games for Inter.

"It wasn't easy to start like this but with the help of the whole team, a dream is coming true. It was another great match again tonight."

Inter came back after a tough first half against Cagliari at the weekend, but it was a different story against Napoli at the Meazza as Milito added a quick second to Eto'o's opener before Lucio headed in the third.

"We had a different approach to the match today. We started strongly and with a different mentality, and we managed to win by playing well."

The 3-1 victory over Napoli sees Inter move top of the table for at least 24 hours. And Milito will be hoping his ex-team Genoa do the business against Juventus on Thursday to keep the Nerazzurri in pole position.

"Unfortunately I won't be able to go and watch the match in Genoa. Will I be supporting Genoa? Tomorrow and forever." 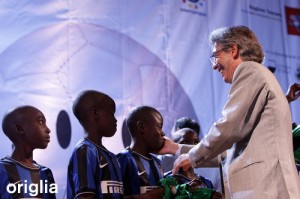 Technical director Marco Branca analysed Inter's performance against Napoli. He said: "We started very well and continued playing very well. We know full well what our objectives are but there are still many matches to play, so in this phase of the season it's important to collect points because the difficult times will come.

"Having changed men and players, we knew that our game could be seesaw, and this is why it's important to get points."

After a hard match against Cagliari at the weekend, Inter breezed to victory over Napoli in the first midweek round of the 2009/10 Serie A season. Dejan Stankovic explained why on Inter Channel.

"It went very well, but everything is a lot easier when you are two-nil up after five minutes," said the Serbian. "Our approach to the match was different. Inter had the right mentality, we kept the rhythm high after going in front and it always goes smoothly when it's like this.

"We defended our lead really well in the second half too. The work we did in during the week was fundamental. We knew where the problems could come from and we resolved them. Compliments to the whole team." 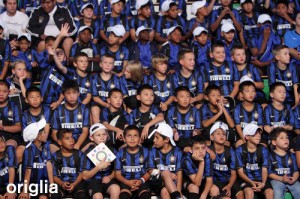 Someone asked about explaining the Inter Campus thing. So, Inter Campus is a program that is sponsored by the team – specifically at the behest of Massimo Moratti.

The program is simple. In 19 countries around the globe, Inter has set up academies as learning centers. Over 10,000 underprivileged children, who are the victims of war and poverty are fed, clothed and educated. They also play football. A lot of football. 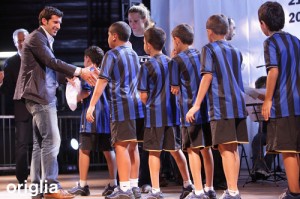 And this week is the Inter Campus World Cup, complete with ceremonies and a presentation of teams, which is what some of us saw before the game as young people from different countries carried flags as they walked by the players and shook hands. This year there are 300 children participating. The opening ceremonies (either earlier this week, I think) consisted of a greeting from President Moratti and Luis Figo and gifts.

The different campuses will compete in a football tournament for 10-12 year olds somewhere in Tuscany. They were guests at the game today and were on the field during warm ups. All told it’s an extraordinary feat of organization and absolutely huge amounts of money invested in this incredible project. 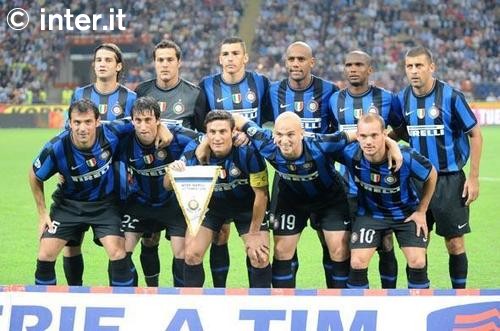