Off to Fight the Tatars

Share All sharing options for: Off to Fight the Tatars 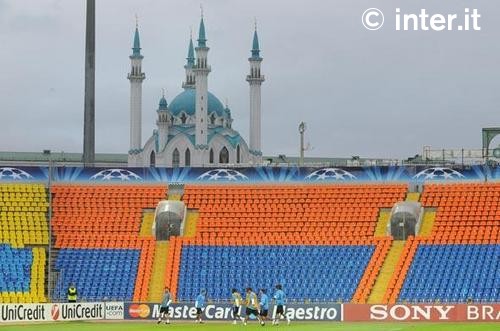 Inter have made their way to the frozen northern steppes to take on last year's Russian Premier League champions, Rubin Kazan (or Футбольный клуб Рубин Казань in Russian; Рубин Казан футбол клубы for the Tatar separatists out there) in Matchday 2 of the UCL. If Inter have any hope of continuing past the group stages, we have to pull some sort of result (hopefully a win) against this team. Standing in our way is our dwindling supply of midfielders and the fact that no one has had a day off in weeks. Plus, who the heck has ever heard of Rubin Kazan? (come to think of it, Rubin may be Omar Khayyám's third cousin twice removed)

What: FC Rubin Kazan v FC Internazionale Milano, UEFA Champions League Matchday 2
Where: Central Stadium, Kazan, Russia (see below)
When:Tuesday, September 29, 6:30pm local time (9:30am pacific, 12:30pm eastern)
How to Watch: FSC is broadcasting this game Wednesday at 8am pacific, 11am eastern. If you want to watch it live, you can try for a stream (MyP2P, Justin.tv, Rojadirecta, Ustream, and ATDHE.net) or watch it pay-per-view at UEFA.com. I have an annual pack (have for years) and I love it.

If, like me, you have never even heard of Kazan, let alone the Republic of Tatarstan, here is a little map to help orient yourself. Basically, it is out in the middle of nowhere, north of the Caspian Sea and east of Moscow:

The city of Kazan is on the Volga River, in the far north of Tatarstan, and, if you zoom all the way in on the map above, you should be able to see the stadium Inter will be playing in tomorrow. It looks cold (scroll east). Luckily, though, the weather for the game tomorrow should be a relatively balmy 61°F.

As I said above, Rubin Kazan won the Russian Premier League last year. According to their Wiki, they won 18 of the 30 games played, scoring 44 goals and allowing 26. This year, they are near the end of their season (the Russian league plays from March to November) and are leading the league again.

Recently there have been some bumps in the road: they lost to Dynamo Kiev on Matchday 1, lost their last league game (at home against Amkar Perm), drew 0-0 the game before that (away to Tom Tomsk), and lost 0-1 in the Russian Cup Final (to CSKA Moscow). Before that, though, they were doing pretty well, having won 14 out of 21 games (drawing an additional 4) and scoring 20 goals in 8 games. 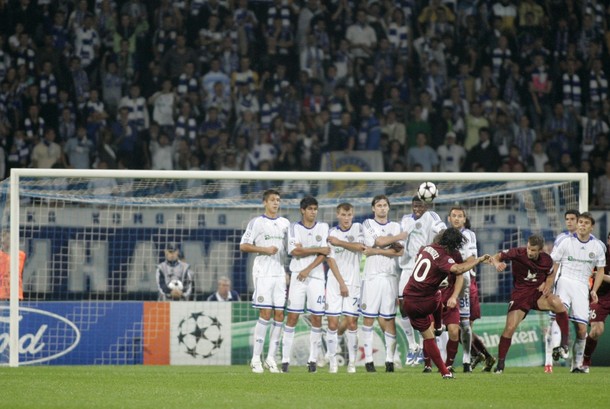 Kazan has two strikers responsible for most of those goals: Aleksandr Bukharov, a Russian who has scored 11 goals in 15 games and Alejandro Dominguez, an Argentinian who has 12 goals from 16 games. Although nearly all of Dominguez's league goals have been scored from the penalty spot, he did manage to score against Kiev in Matchday 1 with a free kick. Kazan also has a couple of dangerous midfielders: Semak (Russia) who has 6 goals and Gökdeniz (Turkey), 4. And, for our "fun fact" file, turns out Dominques and Cambiasso are old teammates. Yep, they played together at River Plate way back in 2001/2. It truly is a small world after all.

This match is really important for us and the fans; having the Champions League in town is like a public holiday for Kazan. People here have dreamed about it. A few years ago we never thought great clubs would come to Kazan, not even for friendly games. Of course, I'm a bit nervous as it is also a new experience for me. However, I think we are ready to face Inter. I don't think our opponents will underestimate us, especially considering what José Mourinho said about wanting to be safe before their trip to Barcelona.

There, I have just exhausted my knowledge on Rubin Kazan. So far, I have not been able to find a call-up list, but, according to Mou: "They use a 4-4-2 system and strikers Aleksandr Bukharov and Alejandro Domínguez link up very well." Also, Macbeth Sibaya will not be there as he is suspended.

(The S.O. wants me to make some joke about tartar sauce but I am fresh out of ideas so I invite you, the reader, to give it your best shot).

I cant tell if Maicon is going to kiss Mario or crush him.

Historically, Inter have done pretty well against Russian opposition in the Champions League. We beat Spartek Moscow both at home and away in 2006 and did the same with CSKA Moscow in 2007 (who could forget that thrilling 4-2 win when Ibra and Cuchu both got a brace). Our only loss to a Russian team in the UCL was in 2003 when Lokomotic Moscow thumped us 3-0 (I blame Recoba). Still, Kazan is a total unknown for me (and you, I suspect).

Luckily, though, Mourinho has been doing his homework. He said:

I think it will be a very difficult match. We have studied Rubin very carefully and we won't let ourselves be affected by their recent performances in the championship. What is important is the team's display in Kiev, where they dominated the match for 75 minutes, losing only because football is a sport that sometimes reserves surprises through details.

Our tactical attitude won't change and I'm expecting Rubin to play a very dynamic, fast and very well organized game. Our first objective is obviously to win. Objective number two is not to lose. The strategy of the group is in our hands. We have three matches - this one against Rubin and two against Dynamo Kiev, from which we have to get the maximum points to go to Barcelona and be in a good position to qualify without having to win the last game to go through.

If Inter play in the same way, with the same attitude and concentration shown in the games against Manchester United and Barcelona, we can certainly win this encounter with Rubin. But I repeat, we respect them a lot and we know they won't be an easy opponent.

He has called up 20 players:

Boy, our midfield sure looks skimpy and the inclusion of Vieira scares the crap out of me. Plus, only three strikers... I definitely think Ricky will make an appearance. I guess that means:

Hopefully, Balotelli will play - hell, maybe he will even start - and maybe we will see Quaresma. We are desperately short on creativity (what was the point of buying all that supposed midfield creativity when they spend all their time on the treatment table - sooo frustrating) and Balotelli and Ricky may well be our best bets. Scary, I know. 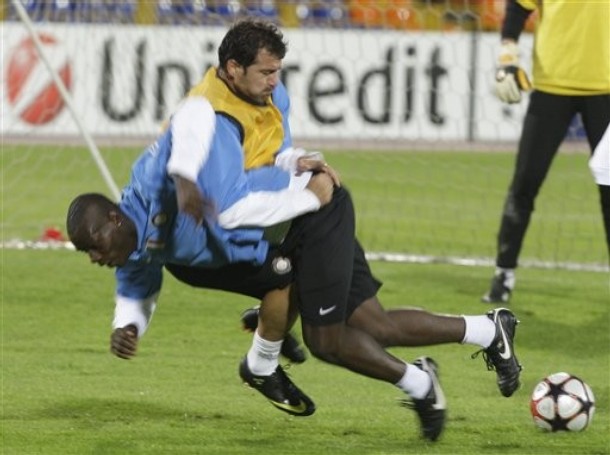 I wish I had some words of wisdom, but, well, I have absolutely no clue how Inter matches up to the Russian Champions. The stereotype is that they will be a bunch of thugs, but, having watched their national team, I can also say that Russia plays some pretty good football. Both teams will be motivated, I just hope that our star power intimidates them just a smidge. I know we can win, the question is, does Inter know it too. We need everyone focused and on task, plus a little dash of "I think I can" to pull this off. One thing is for sure, I dont want to have to pull out that chicken fish again.

You better cheer hard, Walter has his eye on you! 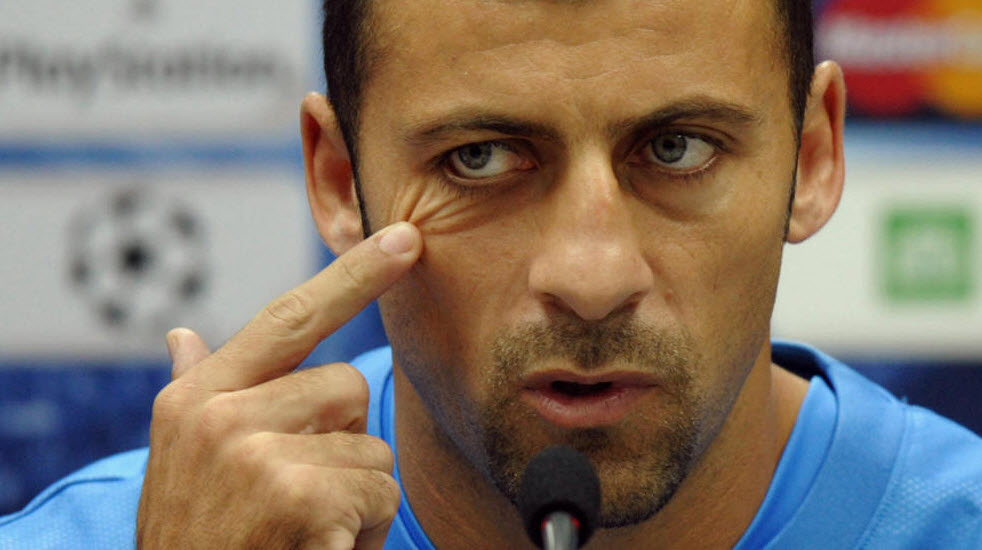