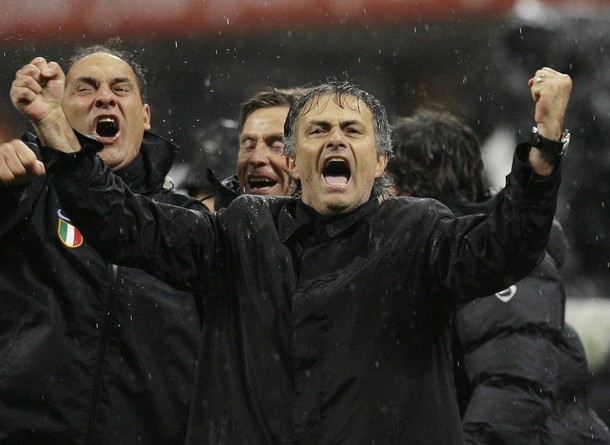 Right, so here we are, finally a week off from games and time to catch up on the rest of the news surrounding the team. The Winter Market is open and in full swing plus there are various other odds and ends to wrap up. I know I said I would do all of this yesterday, but I couldn't bring myself to take down that picture of Samuel. Woof.

As you have all probably realized, Vieira is now a player for Manchester City. His contract was set to expire this June, and although he is valued at 7 million €, Inter let him go on a free transfer. 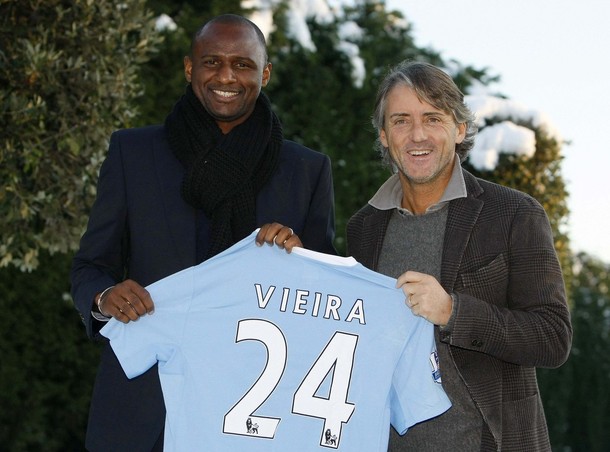 Wow! Mancio has really aged these last couple years. He is positively grizzled!

At least that is what I have been able to find out about it. I know I was hard on him and a sort of miss him now that he is gone, but the fact is, he was largely rubbish with a few bright spots. I know, those bright spots were awfully alluring, but, in the end, so not worth it. Plus, he injured himself every time he played. To whit: he injured himself in the Chievo game which means his Manchester City debut will have to be put off. Mancini says only a week but we all know that really means a month. I say good luck Patrick and good riddance.

The other Mancini, Amantino that is, is still kicking around Milan. He is heavily linked to a 6-month loan stint at Olympique Marseille but the details are a little tricky it seems. The deal was supposed to be done by today, but Jean-Cleaude Dassier, the President of OM, says they need more time:
"The discussion is over, but there is no agreement yet. There are other big clubs interested in the player, but we are on pole. We need another 48 hours. We are confident, but we are not the only ones on Mancini. He must decide. I hoped it was easier, but that's OK".

Apparently, Mancini wants a couple days to think about it. I suppose now that he has a family and all moving around like this is harder to do. Still, the south of France is lovely in the spring. I say go go go.

Another stumbling block may be his wage demands, which may be something in the realm of 300,000 euro a month. What do Inter get out of the deal? Well, as near as I can tell, about 1.8 million euro. So not a whole hell of a lot.

Now, it could be that the figure is only a rental agreement (I have only seen the word loan associated with this deal) and that there will be a buy out option at the end of the season. Hopefully that is the case and we can see something of a return on our huge investment. 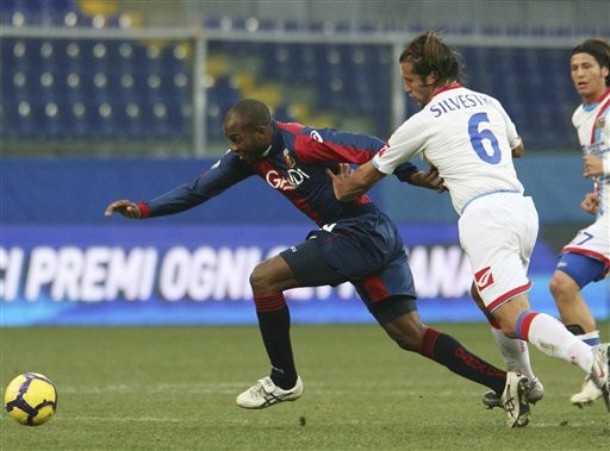 Always the professional - you deserve some good fortune in your career.

Suazo has gone on loan to Genoa for the rest of the season and has already scored for them. Sure, they didn't win the game, but it is a start and I wish him all the best in the world. I have not been able to find the terms of the deal so if any knows, please share. One thought, though is that he may be the chip that brings Ranocchia to Inter - injury or no. He may even be promised to Moratti already. Of course, Juve are also interested so we will all just have to wait and see until this summer.

Il Corriere dello Sport says that Inter are ready to offer Roma Nico Burdisso's card and "un conguaglio economico" (an economic balance) to bring him to Milan - Moratti thinks 2 million should cover it, Roma think it should be more like 5. Baptista, though, would prefer to stay in Rome, or at least "expect[s] to remain" in Rome.

I was going to put the page of La Gazzetta that shows all this here but I cant figure out how to embed it. Press Display is jacking me around - you will all just have to take my word for it.

According to La Gazzetta, Branca and Prade met yesterday to talk about all of this and it may be that Inter can expect him in black and blue in time for the derby. I suppose in the end it all depends on just how much Roma want Nico and how badly they need the cash. Personally, I dont see the appeal but the club remains convinced that he is a viable stand in for Sneijder on those occasions our #10 is not available. He did just score fo them so maybe Roma will want to keep him around. Who can say. I do see the need for a vice-Sneijder, I just dont think this is the guy for us.

Ledesma seems to be on everyone's wish list for winter. While Inter are certainly interested, his situation with Lazio is complicated and he is also at the top of Juve's list. Still, if you believe the internet, Moratti is willing to put an offer on the the table for him. 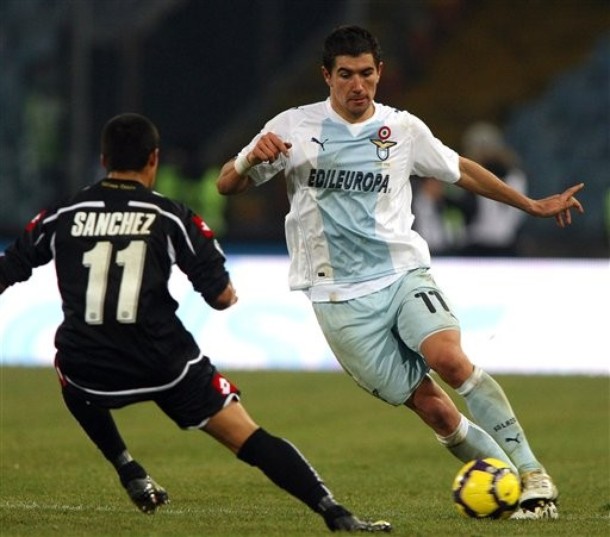 Screw the money, is he worth Rene Krhin?

Kolorov might actually happen. There is just tons of buzz about this guy coming to Inter this winter. I know, there was also significant buzz about a Cassano move this summer and look how turned out. Still, how long can a professional football club challenging for actual silverware go about without a single healthy leftback on their roster?

The Buzz: Deki says that the deal is "increasingly likely." Ok. A little vauge perhaps, but promising. But then, Deki also told a Serbian paper that Kolorov would be "with us by the end of January." Ok! That's a bit more like it.

Rumor is, Inter have offered 11 million euro for him which doesn't seem like much considering that La Gazzetta says that Lotito sent Real Madrid's 20 million euro offer packing earlier this month. There must be more to the deal. I shudder to think which of our poor tender youth will get shipped off to Rome in order to close this deal. The name most often bantered around is Krhin which would make me terribly sad. I really like the kid.

Inter also apparently approached Udinese about both D'Agostino and Inler but had the door slammed firmly in our face. According to the club, neither will be leaving this winter so everyone can just put their checkbooks away. 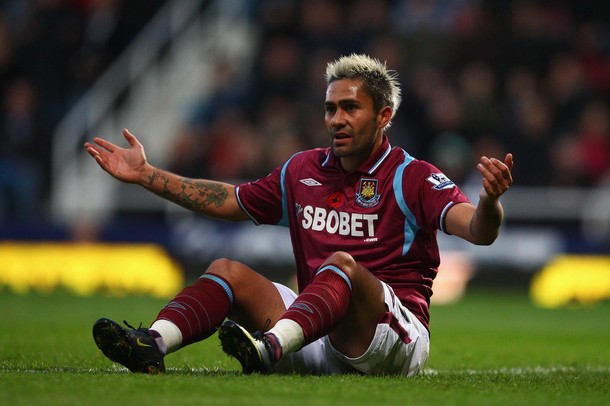 This is an old photo - thankfully his hair is no longer so incredibly ghastly.

Oh, and it looks like Zola is not going to pick up Jimenez. He failed to impress at West Ham and they are sending him back. The good news is, there are still some teams left who are interested, most notably Parma. La Gazzetta says, though, that Catania and Chievo also like him. I know there are plenty of Jimenez boosters out there but I never saw anything in him. Looks like I am not the only one.

Well, Eto'o and Cameroon lost to Gabon today. That means that if they also lose against Zambia, Cameroon will be eliminated. As much as I would like Eto'o to come home, I want him to succeed in this competition more. Cameroon Zambia will be played January 17th and I hope all you Inter fans will be cheering Cameroon on. If he should continue in the competition (which I am sure he will), the final will be January 31. Hopefully, he will back in Milan for Inter-Cagliari on February 7th. 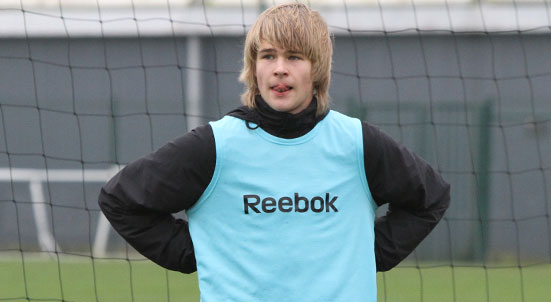 This photo is a couple years old, but holy crap! The kid is adorable!

We have a young Finn trying out with the team. FC Lahti defender Henri Toivomaki, 18 years old, is staying the week at La Pinatina. According to his agent, he is a central defender who can also play at right or left back and is available for a loan with the right of redemption. Apparently last summer our youth scout Pierluigi Casiraghi was quite impressed with his performance. Still, he is quite young and only played 24 games last season. I think he is one to grow with rather than an answer to our current crisis.

And last but not least, the Oscar del Calcio nominations are in and Inter is well represented:
Best Coach Award: Jose Mourinho
Best Foreign Player: Ibra and Milito (although for his work at Genoa)
Best Young Player: Santon and Balotelli
Best Goalkeeper: Julio Cesar
Best Defender: Maicon (although Maldini is also nominted and I dont see him losing)

If there is anything I have missed (and I am sure there is) dont hesitate to post it to the comments. Also, you can always send me tips or tidbits or just lovely little suggestions to my email account: johonnars [at] gmail.com.

I meant to put this up last week but I forgot. Better late than never: