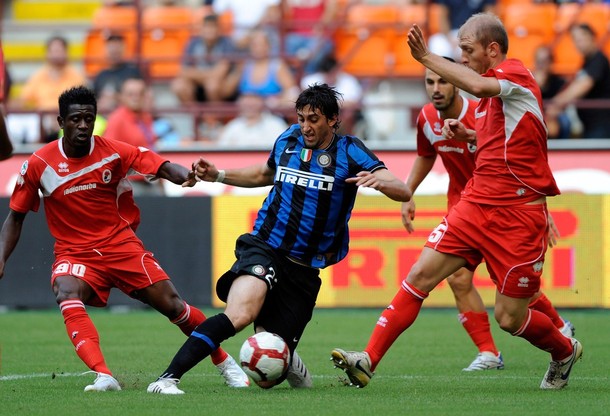 Here we are, already the first game of the second half of the season. For this fixture, Inter travel down to fortress Bari to take on a surprisingly good team. They are fast, in form, and have only lost one game at home. We, on the other hand, are a rag-tag group of players straight from the treatment table propped up with a few youth team members. The pitch will be rough, the stadium hostile, and the play fast. It will take every ounce of concentration, grit, and determination we can muster to come out of Bari with three points. In short, gut check time.

What: Bari v Inter, Serie A day 20
Where: Stadio San Nicola, Bari
When: Saturday, January 16, 8:45pm local time (11:45am pacific, 2:45pm eastern)
How to Watch: Live on FSC or find a stream (MyP2P, Rojadirecta, Ustream, and ATDHE.net).
Weather: At least we dont have to worry about frozen fields or snow this time; the forecast is for 44° F with 0% precipitation. Hooray for that, at least.

Inter and Bari have a pretty varied history together (29 meetings); Inter usually win (13 times), but Bari have pulled off their fair share of upsets (beaten Inter 9 times). In fact, they pretty much owned the 90s, beating Inter 4 times out 8, and drawing an additional 2 times. Yikes. The last time Inter traveled to Bari for a Serie A game was way back June of 2001. Recoba scored twice for us in that game and Inter scraped through with all three points. The game was a bit contentious though, as both teams were awarded a penalty. (For some reason the archive isn't pulling photos of this match either which is why you all get one from this season's game at San Siro).

This was long enough ago that there are no youtube highlights. Instead, we will all have to be amused by this screenshot from the game showing a horribly-coiffed infant Antonio Cassano. Apparently he watched this game from the stands. 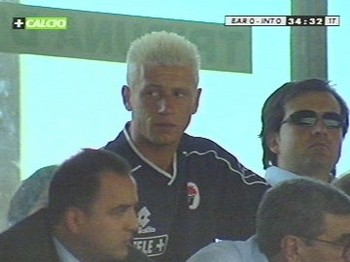 Bari used to have a pretty active board here at the offside. It seems to have fallen out, though, as nothing has been updated for over a month. Eros, if you are there, come back to us. Bari needs some love.

I think it is fair to say that Bari are one of the huge surprise teams of the season. Well, Bari and Parma. Both were just promoted and both are a mere whisper from a European slot. Bari sits at 27 points, just three shy of 6th and Europa Cup glory. Who would have thought? They are fast and organized, and scare the pants off me. [settle down] 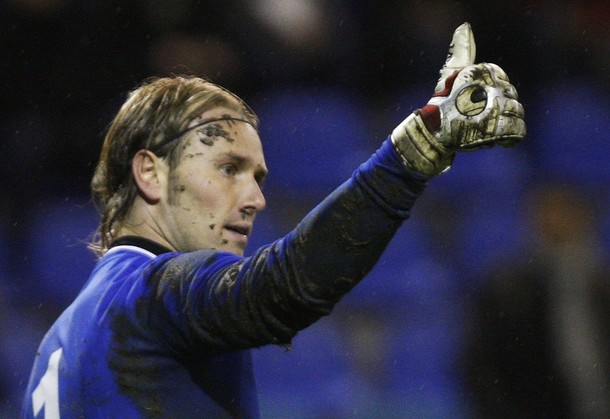 They have an excellent defensive record, largely due to their outstanding keeper, Jean Francois Gillet, and the centerback pairing of Leonardo Bonucci (Inter youth product) and Andrea Ranocchia (maybe soon to be Inter). Ranocchia is injured, though, so is not available. Ventura has had a whole week to practice new pairings at the back, and although it is not an ideal situation, I dont think Ranocchia's absence will be pivotal. 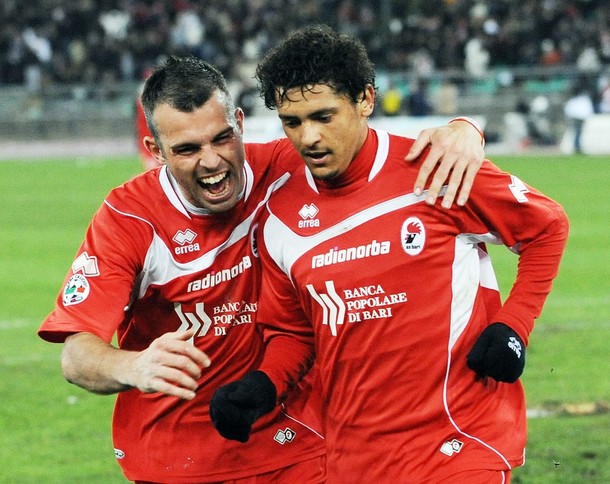 Julio Cesar better watch out cause Meggiorini (left) and Barreto (right) have finally hit their stride.

At 22 goals, they are just about smack dab in the middle of the table (wedged between Parma and Sampdoria). Barreto and Meggiorini (Inter youth product) are Bari's high scorers with 6 and 3 goals respectively. Meggiorini is especially looking forward to the game and hopes to score, saying:

"I do not have to prove anything to anybody but myself and Bari. With them, Inter I mean, I have no grudge of any kind. Everything started there and I was really happy with them. But now I play for Bari and I only think of that. I know it will be a special game for both myself and Bonucci [Inter youth product]. It is useless to deny that [scoring against Inter] would be great. It would be really important to me, but what's really important is that we do well, Bari. Then if I score this time, I will take my shirt off..."

Lets all hope he keeps that shirt on tomorrow.

I have not been able to find Ventura's call-up list so I will have to rely on the great and powerful Gazzetta dello Sport. As we know, poor Ranocchia is injured (get well soon), as are Donda and Kutuzov. Diamoutene is at the African Cup of Nations and Almiron is suspended. That leaves Ventura with: 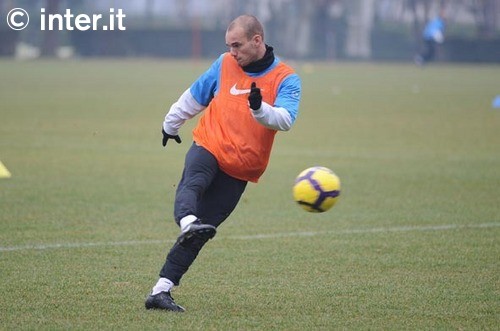 With free kicks like that, I am firmly aboard the "J" train!

Mourinho has called up 20 players to go waaaay down south:

So, this time we have only two youth-team players (whew). Donati (if you recall) had his full debut against Livorno last December in our Coppa Italia game. Sebastian Carlsen is brand new. He has played with first team in three friendlies, Lugano, Piacenza, and Vaduz, but has not had his official debut. He will wear shirt number 44.

We also have three players (Materazzi, Muntari, and Cambiasso) who, were it not such a crisis, would probably still be considered injured. Krhin, Chivu, Thiago Motta, and Stankovic actually are still injured, although Stankovic swears he will be back for the derby.

Now, this list has some talented players, but that line-up makes my stomach hurt. I just do not like Milito as a lone striker. Plus, look at the results: since we have been experimenting with this formation we have three 1-0 wins, a 1-all draw and that horror of a 4-3 from last week. The wins are great and all, but they just seem so labored recently - like pulling teeth. People may be tired of that diamond midfield, but last year we were winning quite a few more games 2 and 3 to zero. It couldn't all just be down to Ibra.

Mou admitted today in the press conference that the huge concession of goals last week was not only a problem in defense (Maicon, I am looking at you), but with the midfield as well. He said:

"We did not play well, as a team, defensively, we did not play well. We conceded too much and there's no doubt about this. Of course we were a team without its basic structure which normally is always to midfield giving all the equilibrium in offensive construction and in situations when we dont posses the ball; we were a team that played for the first time with only Motta and Stankovic, then we lost Stankovic, then Motta and there was nobody who could be substituted, then from there Zanetti only, of course it was a team with a lot of problems in structure and we've given so much defensively. But at the same time, we demonstrated that despite the difficulties we have had great character, we drew and then, when 99 percent of the teams, would have settled for a draw obtained at 90 '. Inter instead was different, we risked everything and, with luck, managed to win the three points."

So, hopefully with a little more structure in the midfield, the game wont be quite so heart-stoppingly high scoring. In fact, I would be overjoyed to finish the day with one of those 0-1 wins I was just complaining about. Yep. That would be just skippy!