Al-Hilal v Internazionale: Hey! We Have A Game Tomorrow!

Share All sharing options for: Al-Hilal v Internazionale: Hey! We Have A Game Tomorrow! 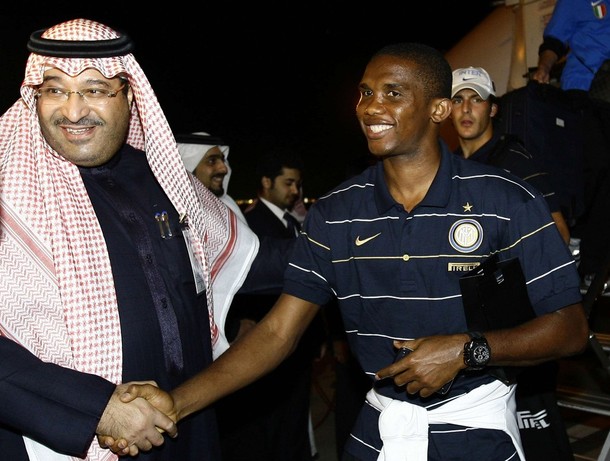 Yep, our first of the new year. Sure, it may be a lousy friendly, but a game is a game and it beats watching the stinky EPL any day. The boys are in the middle east (Abu Dhabi) taking advantage of the sunny climate to have a bit of mini training camp before the return of the Serie A on January 6. As a little topper on the cake, a friendly has been organized between Inter and and the Saudi team Al Hilal in Riyadh. The game will mark the retirement of Nawaf Al-Temyat, an Al-Hilal legend, beloved international, and former Asian, Arab, and Saudi Player of the Year (those are three separate honors). He hasn't done a whole lot lately, and I guess it is time for him to hang up his boots. What an honor that Al-Hilal chose to do it against our club.

What: Al-Hilal v Inter Milan, International Friendly
Where: King Fahd Stadium, Riyadh, Saudi Arabia
When: Saturday, January 2, 7:45pm local time (5:45pm CET; 8:45am pacific, 11:45pm eastern)
How to Watch: Unless you have access to a Saudi or Inter Channel broadcast, you will have to find a stream: MyP2P, Rojadirecta, Ustream, and ATDHE.net

For those of you unfamiliar with the Arabian Peninsula, Riyadh is pretty much smack dab in the center (whereas Abu Dhabi is on the Persian Gulf).

A little map to get your bearings - centered on King Fahd Stadium where the game will be held:

According to Wikipedia, Al-Hilal is the most widely supported club in Saudi Arabia. They have won more trophies than any other Saudi team, and the IFFHS has declared them "Asia's Club of the 20th Century." I guess they are pretty good. This season, out of 15 games, they have won 12, drawn 2 and only lost 1. These guys like to win. They are currently at the top of thier League table with 38 points, having scored 41 goals and only conceding 13. Not bad. 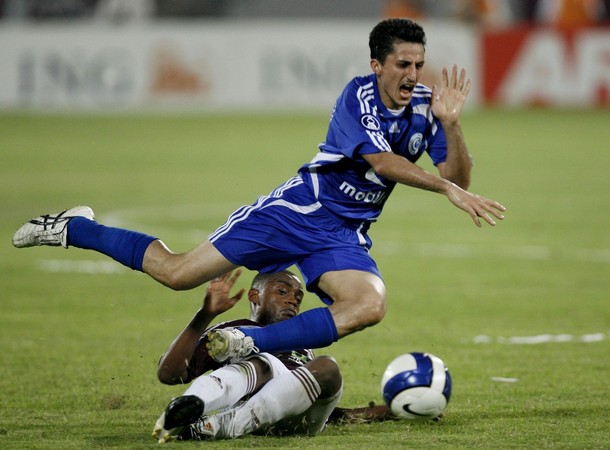 And here he is, the man of the hour: Nawaf Al-Temyat.

Their high scorer is a midfielder named Al-Shalhoub (11 goals), but their requisite Brazilian (every team has to have at least one), Thiago Neves, is no slouch either with 8 goals. They also have a familiar face in Swedish winger Christian Wilhelmsson - if you recall, he spent half a season with Roma (it didn't work out). Anyway, he seems to be fitting right in at Al-Hilal as he has 15 goals in 26 appearances (7 goals just this season). Unlike Inter, Al-Hilal have not been on break. They played their last game just yesterday on December 31. That game was their first (and only) loss of the season. 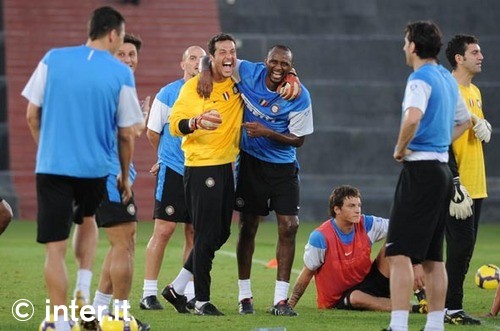 Despite rumors to the contrary, everyone seems to be having a great time in the middle east. The weather is nice (76° F in Riyadh) and almost everyone is back to full training. Only Muntari and Thiago Motta are still out.

Eto'o was hoping to stay for the whole retreat and play the Chievo game on Wednesday but that is not to be. Instead, he has been summoned by the Cameroon Federation and will leave for the Africa Cup of Nations when the team returns to Milan. For the friendly, it is likely Eto'o will start with Milito. Plus, I bet Santon, Samuel and Quaresma will get a run out as they are just coming off of injury.

Mourinho was cautious in his press conference, saying:

"On 2 January there is a match against Al Hilal in Riyadh. We will play it with great respect for the opponent, the occasion and the crowd. We know it will be a friendly, but it will be challenging and it is a very important test ahead of the resumption of the championship. However, we have heavy legs due to the preparation we are doing, and we might get beaten."

I guess that means that although Inter will play to win, we wont play really all that hard. I mean, we wouldn't want anyone to injure themselves. Plus, this is the farewell game for one of their guys - it wouldn't look good for Inter to beat them, at least by more than one goal that is.

As for the transfer front, Pandev is looking closer and closer. He now wants Inter with "all his strength." Suazo had gone off to Genoa and I wish him all the best. At least there will be a few familiar faces around there - he should feel right at home. Cordoba has apparently asked to be allowed to negotiate with Manchester City who are offering 5 million Euro for his ticket. Basically, it all hangs on whether Inter can swing Kolarov in January. If not, the whole thing may have to wait until June. Oh, but even if Cordoba goes, it may not be the last we Inter fans see of him: he has asked if there is a place for him with the club after he retires (you will all have to believe me, I cant find the link right now).

There are still rumors of Mancini changing clubs before the end of the transfer period. So far, they have all linked him to a return to Roma - perhaps as part of a deal involving Baptista or Andreolli. Now, it seems that Spalletti would like him at Zenit. All I can say is that St. Petersburg is a long way from Rio. And last, but not least, Panathinaikos has been sniffing after Materazzi. Well, they can just shove off because I think the club and Mourinho has made it clear that he is an important member of the squad, no matter how many minutes he plays.

Well, I think that about does it for rumors and preview. I hope everyone had a great New Year and I am looking forward to seeing you here for the friendly.

How about a little tour of Abu Dhabi with Scarpini to put us in the mood?