In 1967, sports journalist Gianni Brera coined the term Derby d'Italia to describe this tie. At the time, Inter and Juventus were the two biggest teams with the most honors between them. Since then, things have changed a little. Juve still have the most scudetti but Milan have saddly overtaken Inter on the European honors front. None the less, the rivalry continues. And with Torino in Serie B, this may be the closest thing to a real derby Juve has right now. Juve come to Milan at sort of an interesting time for Inter. Sure, we have been playing better, but appearantly, so have they. In addition, this season it is Inter with the full infirmary. I will admit, I want to win this game so baddly that I can taste it.

What: All That is Right and Good (ie Inter) v The Forces of Evil (ie Juve)
Where: Stadio Giuseppe Meazza, Milan
When: Sunday, October 3, 8:45pm local time (11:45am pacific, 2:45pm eastern)
How to Watch: Live on FSC (other channels here) or find a stream (MyP2P, Rojadirecta, Ustream, and ATDHE.net
Liveblog: Kirby? What do you say? My liveblogs are totally cursed now.

Once again, party at Kirby's house for the game. Come 15 minutes before kickoff (and I think it is BYOB).

Inter and Juve have a long history of rivalry - at least some 50 years of it. Some think that the rivaly goes back to the 1960/1 campaign and the famouse 9-1 Juventus win. The story goes that second-place Inter came to Turin in April of 1961 to take on first place Juventus. Inter were only four points behind and had already beaten Juve 3-1 earlier that season in Milan. Unfortunately, so many fans turned up for the game (far more than the stadium could hold), that about 5,000 fans spilled out of the stands to watch the game from the sidelines, some even making thier way onto the Inter bench. Despite this, the game started as planned but half an hour into the first half, the referee ordered the game abandoned because of the Juventus supporters on the pitch. According to the rules, Inter was awarded a 2-0 win (Juventus was a awarded a simular win under similar circumstances a couple years previous to this ruling).

Juventus appealed the decision to the FIGC and on the last day of the season, just before kickoff of the last game, the court ruled that Inter's win would be repealed and the game would have to be replayed. In the eyes of Inter supporters and players, this ruling virtually handed Juve the championship. To make matters worse, the head of the FIGC at the time was Umberto Agnelli, the president of Juventus (and father of the current club chairman, Andrea Agnelli). Inter president Angelo Moratti (father of the current president, Massimo Moratti) and coach Helenio Herrera decided that they would field Inter's youth team for that replay in protest. Inter would play the game but it would be shown for the farce they felt it to be. The outcome was the 9-1 destruction of Inter by Juve and the birth of a rivalry that continues to this day. It is a bit staggering to think that events that occured 50 years ago are still coloring how people view this game today but fans have long memories and the legend of that game lives on.

Since then, there have been more controversial games with dubious outcomes that have only served to fuel the fire. In 1998, Ronaldo's famously denied penalty made the rivalry relavant to a whole new generation of Inter fans. The calciopoli scandels brought the issue into the twentyfirst century, and, although tempers have cooled somewhat, it still simmers just below the surface. Inter fans are still on their guard, looking for any infraction, any reason to point the finger and cry foul or favoritism. This rivalry is so intense that it has become one of the defining elements for both fan bases. To say you are an Interista automatically implies that you loath Juventus, you cant be one without the other (and vise-versa, I'm sure).

Given all this history, all the drama, all the emotion, it is clear that when Inter and Juventus play, it can never be just a simple game of football.

Juve and Inter have played 90 Serie A games in Milan. And Yipee, Inter has either won (42) or drawn (28) most of them, and has outscored them 157 goals to 100. See, now that is a fun fact I can really get behind. As I am sure you all remeber, last season Inter won this match 2-0 after a wonder goal from Maicon and a little insurace from Eto'o. Bask in the glory of the highlights below:

Eeeewwwww. I think I just threw up a little in my mouth.

Lets just say I have strong emotions toward Juve; a deep, all encompassing loathing that leaves a bad taste in my mouth and an overall need to shower. If you would like to know more about them, there is a handy board just next door. I am sure Aaron or Roberto will get something up.

All kidding aside (although I really did just throw up a bit), Juve is never ever an easy match. It doesn't matter where they are on the table, how many injuries they may have, or how generally mid-table they may be, Juve will always find that extra little bit somewhere when they play Inter. Drives me nuts. 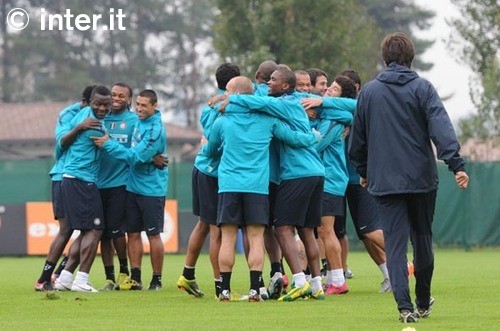 So, can we finally put these rumors of locker-room troubles to rest?

Rafa has called up 20 players:

It looks like Zanetti, Samuel, and Pandev are still injured. I am sure they will be back after the international break (Samuel and Zanetti have been excused for the Argentina friendly against Japan).

As for the presser today, I think Rafa pretty much summed it up the whole thing when he answered: "Excuse me, but I must dribble your question a little." That is pretty much what he did the whole conference. The press tried desperately to get Benitez to say something controversial about Juventus but all he would say was the usual platitudes: Juve is hard, we need to be good, we can win with the fan's support, let's just think about football and the game on the pitch. zzzzzzzzzz....

The journalists then moved to getting Rafa to give something away about the formation he would use and which players he would start. Well, there was nothing doing on that topic, either. Basically, Rafa just droned on about balance and how if a player was called, that meant he was ready to play. Really, Rafa is much better at Mou at saying absolutely nothing to the press. In the end, Mou would always get drawn out about something - he just couldn't help himself. Rafa, on the other hand, can dish out platitudes and double speak all day, it seems.

So, where does that leave us with the formation...

La Gazzetta thinks it will go:

(btw, you know you are in trouble when you need a scroll bar for the injured).

Which may not be such a bad idea. I thought Coutinho played well against Werder Bremen, but Juve players will break your leg just as soon as look at you. I would hate for his little body to be all stamped on by those lumbering oxen. In any event, if you disagree be sure to post your lineup prediction in the comments. You too could be declared the Grand Imperial Poobah of All Things Inter and be awarded a certificate to prove it.

Well, I am going to have to cut this short (ha ha, over 1000 words now) as I have to go support my local team. I wont make any predictions because those scare the crap out of me. I dont even like the fact that we seem to be favored by the bookies - it smacks of hubris and nothing gets you smacked down faster than a sense of hubris. Instead, I will say my prayers to the Calcio Gods. I will light my candles and burn my incense. I will think positive, happy thoughts. Because, really, all I want this weekend is a win. Just one, simple little win. And it isn't even about standings at this point. It is about doing what is right, about keeping the forces of darkness and evil at bay one more time, about slaying the beast and freeing the land of their tyranny. Well, ok, maybe not that last bit, but they really do need beating.