Inter Milan v Tottenham Hottspur: There Can Be Only One

Share All sharing options for: Inter Milan v Tottenham Hottspur: There Can Be Only One 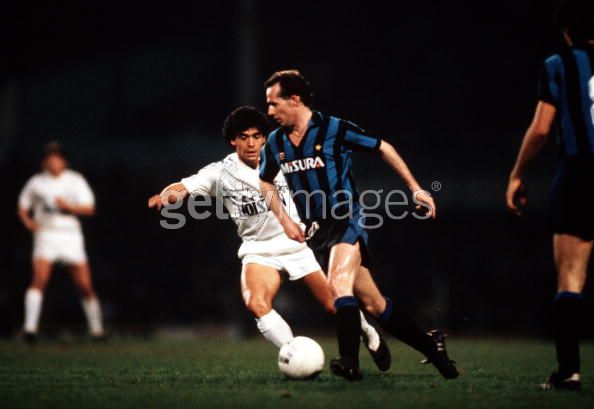 Leader of Group A, that is. And this game may very well decide that honor. Right now, Inter and Tottenham are tied on points (4 a piece) and co-leaders of the group. I guess officially, Inter are #1 because although both teams beat the snot out of their respective opponents on Day 2, Inter has allowed one less goal than the London side. On paper, this is our toughest competition in the group. And we are coming to this game in a decidedly weakened state. Still, Tottenham is a chicken-themed team (what is it with chickens and football?) and everyone knows that snakes eat chickens.

What: Inter v Tottneham Hottspurs, Champions League Group A, Day 3
Where: San Siro, Milan
When: Wednesday, October 20, 8:45pm local time (11:45am pacific, 2:45pm eastern)
How to Watch: Live on these channels (delayed 4 hours on Fox Soccer Channel), ppv on FoxSoccer.tv, or find a stream: MyP2P, Rojadirecta, Ustream, and ATDHE.net
Liveblog: Absolutely. Kirby will run one here, on the Inter offside. It will go live 15 minutes before kickoff.

(As an aside, Kirby has graciously offered to do all the liveblogs here on the offside. So, the usual drill will be to meet on the new page he will put up about 15 minutes before each game. Everyone say thank you to Kirby.)

Inter and Tottenham Hotspur have never met in an official game. Therefore, we dont have any statistical data or historical precedence or even an old highlight video.

If anyone is wondering what the deal is with that crazy picture above, it from the only mention I can find of a game between Tottenham and Inter: the Ossie Ardiles Benefit Match in 1986. In the picture shows Liam Brady in an Inter kit and Diego Maradona as a Hotspur. I know, it made me comically turn my head to the side and say "WHAAAAT?" in my best Scooby Doo voice as well. If anyone is interested, we lost 2-1. 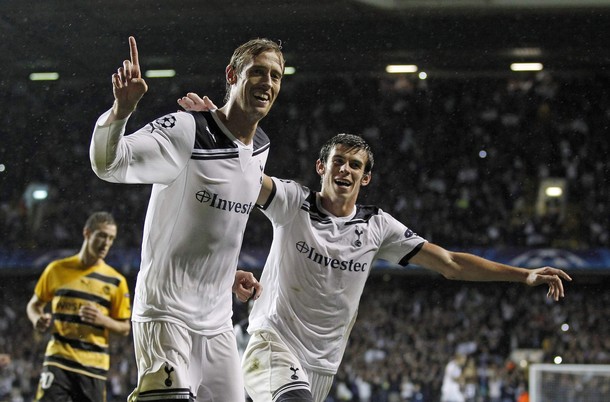 You will note, the one on the right has no neck while the other is clearly half flightless pterosaur.

Ok, here is where I make the big confession: I dont watch the EPL (or BPL or whatever they call it). I think I could be persuaded to watch a Manchester City game should Balotelli ever get fit again and actually play for them, but that is about it. I did watch the highlights from their last Champions League game, though (where they beat the snot out of Twente), and I still think Inter should have given Van der Vaart a closer look over the summer. But that is all water under the bridge now.

Anyway, Tottenham sit in 5th place in their league with 14 points after 8 games, although if it weren't for their goal differential, they could be third. Their home and away record is the same (W2, D1, L1), so no good news for Inter there. They have a mixed record in the champions league: sure, they beat Twente 4-1 last game day, but that was after three (yes 3) penalties - which is sort of crazy mcnutter pants if you ask me. They drew Werder Bremen 2-2 on the opening day of the group stages, and before that, over turned a 3-2 defeat to Young Boys by beating them 3-0 in London.

In terms of goal scoring, their only goal from open play last game day was from Rafael Van der Vaart who then got himself sent off for a second bookable offense. That means he will not be available for the Inter game (woo hoo). The pterosaur is their high scorer in the champions league - thanks largely to a hat-trick against Young Boys (really, how do announcers keep from snickering like an adolescent when they say that name?).

Tottenham have also been hit with the injury stick and Ledley King, Jermain Defoe, and Michal Dawson are all out for this game. It appears that Gallas and Bassong will play in defense, even though Gallas is not 100% fit. As for line-ups, holy cow, how should I know. I suppose it will include a Welsh guy (with no neck) and a 14-foot-tall half man half flightless pterosaur. La Gazzetta thinks it may go like this:

Both the team and the coach seem pretty confident that they will take at least 1 if not 3 points from this game. Redknapp has made it clear that they are coming to Milan for the win, not the draw, saying:

“We always have a go; we play an attacking game,” he added. “We’ll look to have a go [at Inter] and try to cause them problems. We won’t just look to sit back and soak up pressure for 90 minutes; that’s not the way we play. We’ll be positive and see what we can do.”

"We'll have to be tactically aware against Inter, otherwise you get overrun away in Europe, but we have good enough players to cope with Inter. I look around our dressing room and we are as good as any squad in the Champions League. Barcelona are the team to beat but we have a number of players who would get in Barcelona's squad. I genuinely believe we can beat anyone.''

Hmmm, Barcelona quality. Well, most of these players already know how to deal with the actual Barcelona players so I think they can handle Barcelona-quality ones as well. 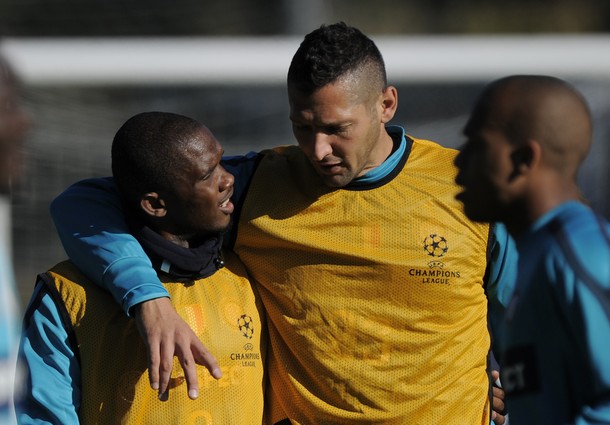 There are some interesting names on the call-up list today:

Cambiasso has made some sort of crazy miracle recovery (not that I am complaining or anything) and Thiago Motta made it intact through his first game of the season. Now lets see if he can make it two. Pandev has been cleared to play but he will probably have to wear an ankle brace. Cordoba is back as well which means slowly but surely, we are getting back some optoins.

How will this shape up? Well, I dont think there will be any surprises:

Basically, I dont think either Thiago Motta or Cambiasso are fit to start but I think they may make an appearance. Pandev may be in the same boat, but I would very much prefer to have some non-Biabiany option. I know he is fast, but we need more than speed. Pandev is more adept defensively which allows Maicon more freedom to come forward. Plus, I dont know what Biabiany's pass completion rate is, but Pandev's must be higher - it just has to be.

Rafa gave very little up in his presser today. At least Mou would sometimes throw us a formation bone or two. Of course, this may also be down to the level of the journalists in the room. When one of the questions asked is "Who is the nicest, Jose Mourinho or Massimilano Allegri?" it makes you wonder. (For the record, Rafa was incredulous, replying: "You expect me to say something?")

Zanetti wasn't much better. The same platitudes and sport-speak: "We respect Tottenham in the same way as the other teams in the group. We will be very careful and we will fight game after game and do our best to secure early qualification."

I mean, isn't that exactly what every other athlete says all the time? Remember when we used to get "intellectual prostitution" and "zeru titoli"? Those were the days. Rafa did take some half-hearted jabs at the now ex-owners of Liverpool, but who cares about that? Not me. So, no help from the pressers today. 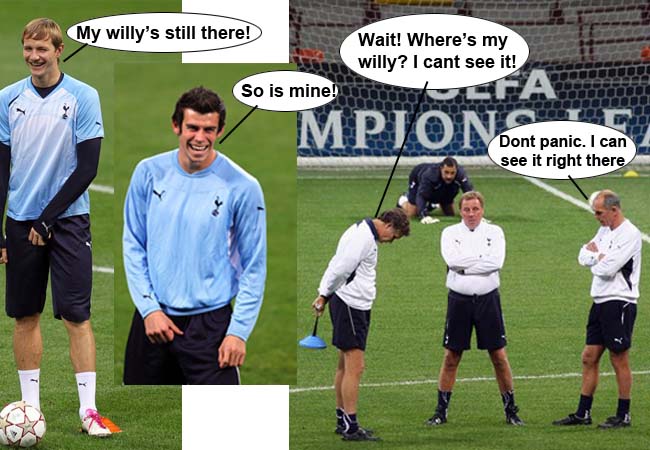 Good news, everyone! A quick look at the photos from today's training shows that the Tottenham players and staff passed their daily willy-check.

Basically, this will be a tough test. They are young and fast and we are old and just not getting the Rafa-system. Granted, we have home pitch advantage - which is actually saying quite a lot - but I dont think Tottenham will suffer from overawe at the San Siro. Redknapp says they wont just sit back and defend so if we can keep them on their toes defensively, it may open up some room for us in the midfield. Maybe. Also, hopefully Rafa has found some sort of magic set-piece dust because we have been entirely useless in set-pieces this season. Every corner, every free kick... all of them a wasted opportunity. The team is just going to have to step it up a bit.

I am cautious and nervous (as always) but I know that English teams tend to underestimate Italians and I think this is something we can exploit. I think we can surprise Tottenham tomorrow. Inter are not Young Boys or even Werder Bremen. In London, they have been playing the likes of Wolverhampton Wanderers and winning, but Inter are a far sight up the talent scale (no offense, Wolverhampton Wanderers - I am sure you are all very nice people and all). I guess what I am saying is that, yes, Tottenham has had good results domestically recently but they have been playing bottom-table sides. Sure, our guys are older, but that means they are also more experienced. And in the champions league, that counts for something. At least, I hope it does. Werder are a young, fast team, and we dealt with them pretty effectively. I see no reason why we cant do the same with Tottenham tomorrow.