I ♥ Julio Cesar Even More!

Share All sharing options for: I ♥ Julio Cesar Even More! 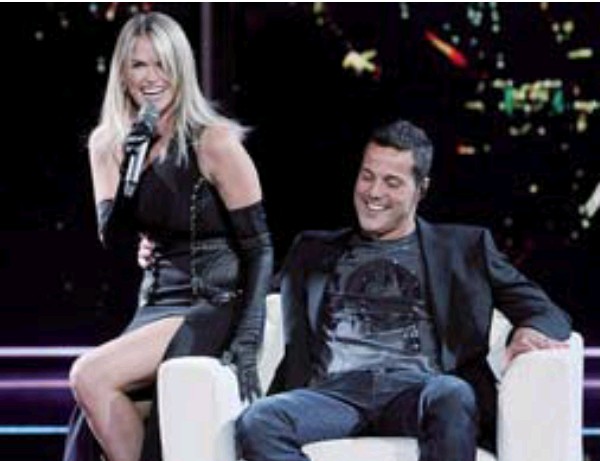 I know, I know, he wasn't at his best last week, but that doesn't matter - I love him. Just last Thursday, he was the guest on Chiambretti Night, a sort of Italian chat show with showgirls (you may remember when they made Capello and then Mourinho squirm). I found a few pieces of it and, between the blushing and the tears, it is pretty darn wonderful - he is just so darn adorable.

Usually, this show is an hour long. I have been feverishly looking around for a download of the whole episode, but to no avail (anyone, please, if you have it, email me at interoffside@gmail.com or post a link). There are portions of it up on youtube, though, and I thought I would share. I know many of you dont speak Italian, so I have done a sort of run down of the good bits after the video. Hopefully it isn’t unbearably pedantic.

In the first part, Chiambretti tells everyone that they have the real Julio, not his brother who played at the San Siro (which is in reference to JC's exit interview after the Tottenham game). He teases JC a bit about the goals he allowed, tells him he made a great entry onto the stage and Brazilians are the nicest people.

He then goes into a bit about how keepers are a different kind of player, that they are smarter than strikers. JC says he doesn't know - he doesn't like strikers much. Well, he likes his strikers...

Chiambretti pokes more fun at Inter and JC says that the group is the same and this year and we think that we will win this year as well.
C: Everything?
JC: Everything? We hope so but last year was truly a wonderful year for all of us, all the Interisti. And yet we know how hard it is to repeat what he did last year. We will try.

And then JC compliments C on his suit and explains he wore one the same color when he got married in 2002 (and boy, did he ever).

After that, C talks a bit about how Inter is a family then solisits the story about when JC first met Mihajlovic (seems like forever ago). He says he heard people saying “Sinisa” but he wasn't sure he was hearing it right so he asked Miha what to call him. Sinisa replied "you can call me what the fuck you like." [thanks for the correction, Miq!]

C talks about all the Brazilian forwards who drink to much beer then asks if it is the same for keepers. JC says no, he is always here.

C then recounts a time when JC played for Flamengo he took the ball, left the goal, and ran it up the field, joking that he is "Door to Door" like Bruno Vespa. JC says he did it twice.

C asks what Mourinho thought of that. JC replies that first, with Roberto Mancini, he tried to take the ball a little and Mancini said that if you do that you wont play so after that he kicked all the balls away.

C brings up his time at Chievo, and JC points out that he was the fourth keeper at Chievo and was never even on the bench.

In the second bit there is a brief thing about how JC has golden hands, then a bit about the Coppa America, before we get to the part where C asks JC if stopping a penalty is like having an orgasm. JC says it is similar, but in his opinion, an orgasm is better, much better. (I just love the feverish blushing)

C asks him why he pumps his arm when he blocks a penalty and JC says it is to tell his wife to be ready for him when he comes home.

After the swipe, C ask JC if he thinks of his wife.
JC: always.
C: you think of your wife all the time during games, dont you?
JC: It's a little difficult, I...
C: But when the game is in the other half and for half an hour you just sit there like this, you kick your shoes, spit in your gloves...
JC: But I need to concentrate more.

And then the bring Susana Werner, his wife, out - which is a surprise. If you watch, he is very clearly quite in love with her, even to the point where her song makes him cry a little (I swear, that boy cries at the drop of a hat). Anyway, the Italian press is just totally in love with him for this. Such a good boy, loves his wife...

On this last bit, C brings up Lucio and the days after being knocked out of the world cup. Poor JC, he says: "If we are going to start talking about this, I am going to cry."

How can you not love his guy? It is impossible! Impossible, I say.

I will have the Samp preview up Saturday afternoon.