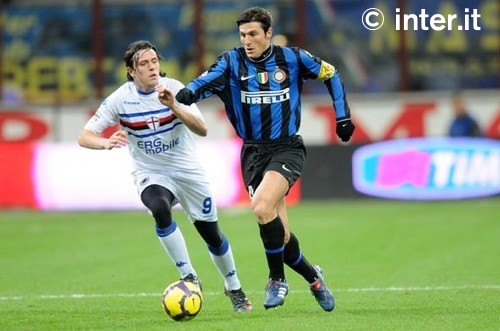 I dont know if anyone noticed, but this week we play both teams from Genoa: Samp on Sunday then Genoa on Friday. How convenient. This will be an interesting game, considering the last time Samp came to town there were 9 cards, three sendings off, and Mou's iconic handcuffs gesture. Of course, it also served to cement the team and give them that little extra push to cross the Tripletta finish line. Anyway, this time we have the opportunity to see what an actual game of 11 against 11 is like and hopefully to get those two points we missed last season. 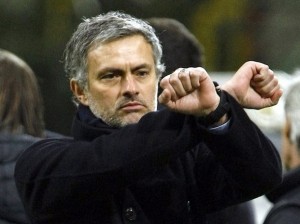 Rafa says no handcuffs this time, only eyeglasses. In a way, that sums their differences up pretty accurately.

Last year, this fixture got a little hairy (as I think we all recall). It saw Inter go down to 9 men (Samp down to 10 in the end), and resulted in a spate of suspensions for things roundly denied by the accused and the supposed victims. All and all, it was a crazy game but I think it served to cement the squad - give them unit cohesion, if you will - and helped fuel that last push to the tripletta. I also think this was the final straw for Mou, when he decided to move to Real Madrid. In any event, even with only 9 men on the pitch, Inter didn't conceded. Of course, we didn't score either, but you cant have everything.

Well, there was an active board here for a while, but with no posts since September, I sort of think Stephen may have moved on. Oh well. Looks like it is all up to me, then.

Semioli is injured while defender Lucchini is injured and suspended so he double wont be there.

Samp has been doing pretty well so far. They sit at seventh place with 10 points. They have scored 9 goals (the same number as Inter) while conceding 7. Here is the rub, though, they have yet to win on the road: four games, four draws.
A quick look at thier team stats on ESPN also show that when it comes to Samp, it is all about the last half-hour of the game. They have scored 6 of thier 9 goals and conceeded 4 of 7 in that part of the game.

So we cant switch off this time.

Sampdoria had a bit of a setback midweek when they lost 2-1 against Metalist even after going up a man, but there are lots of names I dont recognise in the lineup which may account for something (of course, it could also be that I haven't been paying much attention to Samp this season). Anyway, although they beat poor struggling Fiorentina last week, Samp's previous three Serie A games were draws and after the thier quick start to the season (a 2-0 win over Lazio and a 3-3 draw with Juve), things have really slowed down for Sampdoria. What do you be they will be looking for a win tomorrow to get things rolling again. 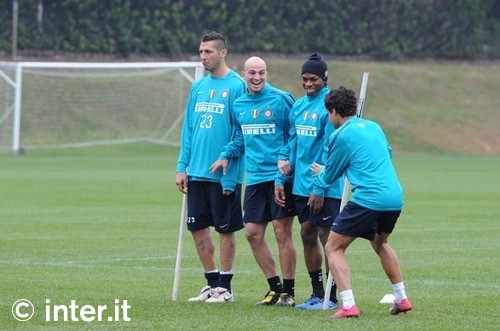 I love that Matrix has his game face even when everyone else is horsing around.

Stankovic is, of course, injured, as is Milito and Mariga. Strangely, Suazo and Mancini are also injured, which is odd becasue they never play. If like me, you are wondering the the F is up with Thiago Motta, well Rafa decided not to risk him - to make sure he is 100% recovered. Rafa says that TM has been training well but he wants to be absolutely sure TM has recovered.

Even with the full injury ward, we have a pretty good group to work with. Cambiasso is ready to return so can take back his place; the only question is whether or not Pandev or Biabiany will play. La Gazzetta thinks it will be Pandev. So, that leaves us with:

And, if our defense can keep their wits about them, this squad may well be able to get things done. Still, Cassano is a force to be reckoned with. Add in Pazzini and everything becomes that much more complicated, although he has yet to reach the same heights as last season. One thing Inter may have on their side is the busy European schedule. Although Samp are not strangers to mid-week European games, they also not habituated to them. Midweek games might be a bit of a struggle for some of the players right now. 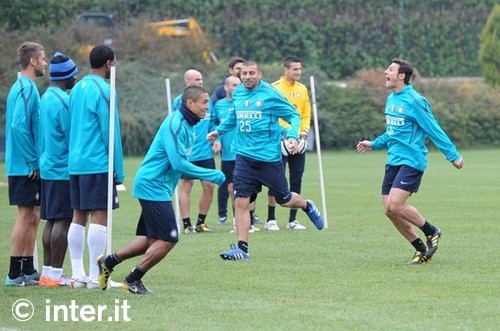 I dont know what they are doing (relay race?) but it looks like fun!

For our part, we are slowly turning into what Rafa wants and the press seems to like it. If the squad can find a way to exercises some of that pazza out of them, we may actually have a shot. Luckily, Wednesday was the best sort of lesson: harrowing but ultimately benign. We got schooled at playing until the whistle blows without dropping any points. Whew. Now lets see what the squad does with that lesson. And please, this time, lets finish with 11 on the field. There just has to be effective team-building exercises that dont include having half the squad suspended for one reason or another.

The table says we need to keep up with the neighbors so a win would be tremendous. Especially one with a few goals and a clean sheet (our goal differential could be better). It wont be easy, but so few things are in the Serie A. Oh, and I would just love for Sneijder or Coutinho to finally score (for us!). What the hell, how about one from each!

And, by way of our very own Maryam, I give you Wesley Sneijder ♥ ♥ :

And this, shamelessly stolen from the wonderful people at blackblue_blood (who actually made this recording)(oh, and that is Milan's coach, Allegri up there with Cordoba):