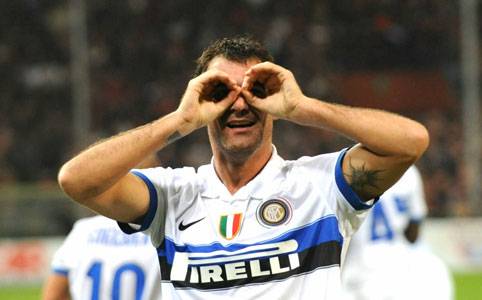 Second time's the charm? Alright, so Samp didn't go quite as planned. Inter managed to salvage a point (and our pride). The thing is, not all that much has changed since the last game. We are still without quite a few important players and missing a plan for breaking down well-organized, defensive teams. Despite the hurting Inter handed down to Genoa last season, they are still a team that can trip Inter up - especially just a few days before arguably our toughest group stage champions league game. Plus, with all the business that has gone between the two clubs recently, playing against Genoa is sort of like taking on the in-laws.

Just about this time last year, I was pondering our chances against Genoa away.

What I said then applies just as well now... So much so that I thought I would just quote it here:

Genoa has a pretty good record against Inter at the Stadio Ferraris. In fact, Inter pretty regularly lose this tie: of the 57 [58 now] games played, Inter has only won 13 [14 this time] and drawn 21. The quick among you have already done the math – Genoa have beaten Inter a staggering 23 times. Yep. 23. Plus, they have a history of really slaughtering Inter. I am talking like 6-0, 6-1 (twice), and a smattering of 5 and 4 goal wins. Of course, most of that was in Genoa’s glorious past, but even in the 90s they beat us 3-0. Formidable sums it up pretty nicely.

Then, after I built them up as this nigh unstoppable giant killer, Inter went and beat the pants off Genoa. I mean slaughtered. Hell, even Vieira scored a goal, the game was that crazy.

After watching those highlights again, I have come to the conclusion that Marco Amelia just had a really off game. He plays for Milan now so we wont have that going for us this time. (As an aside, notice the goals come from five different players... And I miss Mario)

So, we want Destro to be good, but not too good. At least, not on Friday. After that he can kick ass.

First of all, they are sort of us as well. Both Ranocchia (half owned by Inter) and Destro (on loan from Inter) are predicted to start tomorrow and both will probably be looking to make a good impression.

Gasparini has called up 20 players:

Genoa is going through a bit of an injury crisis themselves: Jankovic, Kharja, Palacio, Palladino, Sculli, Rudolf and Veloso are all out injured. That is a pretty large chunk of the first team so Gasparini has had to include three youth players (Boakye, Doninelli, and Polenta) just to fill out the list. Still, Gasparini has his two highest goal scorers available in Toni and Mesto, they have two goals a piece. Our boy Destro has a goal as well, so be sure to keep an eye on him too.

And I think that is a pretty good line-up. Probably better than last season's squad. I know, everyone thinks Toni is all washed up, but I think it is quite possible that there is still some knack left in him. He has always been good in the air, which is something we have had trouble defending against recently. Plus, he is tall which is always a threat. 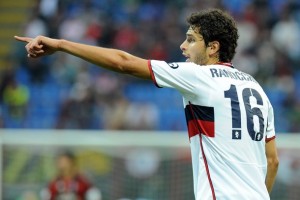 Him too. Good but not too good.

Genoa have an ok record at home: 2 wins, 1 draw, and 1 loss, but they have allowed as many goals as they have scored (5). Pretty much all of Genoa's games this season have been low scoring affairs: all wins but one have been by a single goal. Chievo managed to get 3 past them, but that is an aberration and early in the season. So they know how to defend. 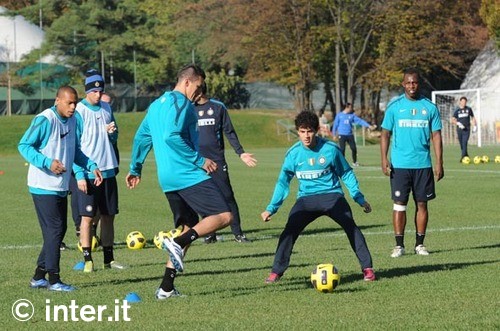 Benitez has his own injury worries ahead of this match. He has also scraped together 20 players:

Well, two steps forward, one step back, I suppose. It looks like Pandev is really back and may well start, while Milito may make the bench. Going the other way is Chivu who I guess got beat up a bit against Sampdoria. I guess he is not badly injured - this is largely precautionary (I think). Hopefully this will mean some minutes for Santon and not the insanity of Cordoba. 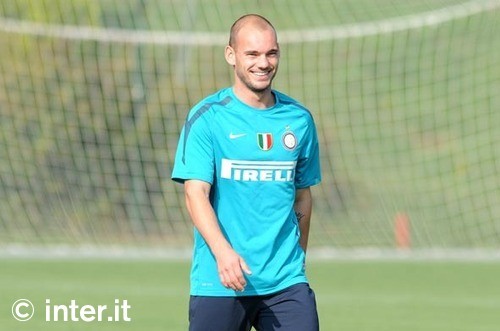 In other news, Wesley finally signed his contract extension. Yipee! This means Manchester United can take a flying leap. He has reportedly signed on until 2015 with a salary around 5 million euro. Maybe this means he can get his head back in the game.

Alrighty, so this leaves us with:

Coutinho got kicked around a bit against Sampdoria so it might not be such a bad thing if he doesn't play a whole game. Milito can come off the bench and play point while Eto'o can go back to the wings for a few minutes. Rafa can work on how to play both Eto'o and Milito at the same time later.

The press has also been wondering how he will keep both them happy. He was asked today if he would have to change the formation when Milito was available again. Somehow he managed not to say anything about actual formations but some strange craziness about being always worried...

"You watch the team and the players. Then I know that if next week Milito is able to play you all will ask me again for the rombus, of the position of the attackers, thats for sure. But I prefer to have this problem rather than not to have it and to have only Eto'o available, having to worry about it day after day because there is only him. Then, it is clear that Milito is not at the same level after the world cup and the successive call-ups with his national team and the injuries: he needs time. The positive thing is that we all know that he is a player at the highest level and that will make the difference. With tranquility, we want the best for him, hen it will be better also for us. He will be very important for us, like Eto'o."

er... ok... But how will you play them both? I mean, sooner or later, we are going to have to work this out. On the up side, if it ever comes to it, Preziosi says Milito can always go back to Genoa - even if he is 34 (!) Not that I think we need to think in those terms, but Rafa is going to have to work something out because one way or another we need to start finding some goals in Italy. And soon 'cause I wanna win this game. I dont want to find too many, mind you - I wouldn't want to upset Ranocchia - but a good showing is definitely in order. Besides, it is pretty clear that Milan is going to kick the crap out of Juve this weekend so we better start running to catch up now.

I think this may be one of those happy thoughts games. Everyone, you might as well start thinking happy thoughts now. Happy, calcio-god-appeasing thoughts. We have Tottenham in mere moments, so an injury-free decisive win would really help get the team in the mood to do well in London. Because as much as I want to beat Genoa (and I really really do), I want to crush Tottenham even more.

Dont forget, Kirby is running the liveblog for games now. Join us 15 minutes before kickoff, here on the offside (I will be at work, but I may drop in for a bit)

uh, did you know they had Comedy Central in the Netherlands? Well, it seems Wesley Sneijder knew, alright. (please, anyone, what is he saying?!?)