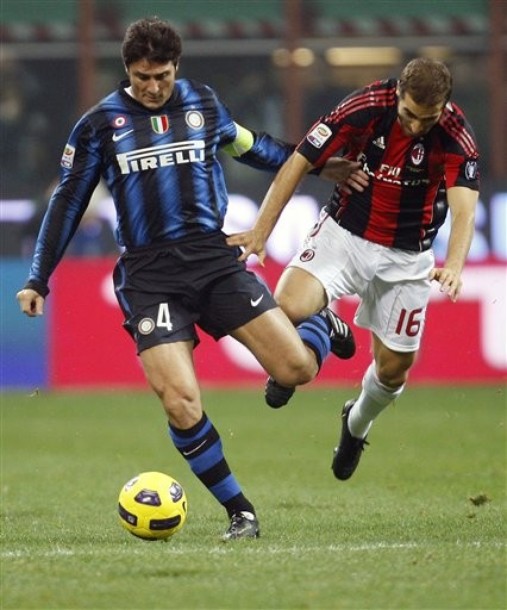 I told you so after the Lecce game. I said that there was going to be a penalty. There was. I said that Milan was going to win the game. They did. That all they ended with was the penalty considering all the pre-match noise, not so bad for us, really. That they ended the game with more than 9 players is sadly typical.

Bologna, Lecce and Brescia were key draws. We lost 6 points farting around with relegation zone teams. Those are the results that lose a championship. Losing to Milan without a real fight is not critical to the league. It’s not really pleasant, but we have lost this tie before. We will win it again.

I wrote in a previous article that if your team didn’t play well, it’s hard to get broken up about a loss. This team didn’t play well. Judging from the comments section, this was a great victory for the red and blacks, but I think most of us from Blue and Black Land just see a team limping towards January hoping for a break.

No Inter Players of the Match again. A case could have been made for Obi or Deki as they tried very hard and looked like they were of the few who cared.

Pagelle gets another break. Unless your name is Castellazzi, Deki, Obi or Eto’o… you didn’t show up. And Castellazzi is there because he wasn't really tested.

Penalty against Materazzi was correct.

Gattuso yellow against Obi was correct.

Gattuso non-caution against Sneijder is an abysmal decision. There hasn’t been one media outlet, news aggregator or pundit that disagrees on this. If you are going to call a penalty in the first 5 minutes of a derby you better get all the rest of the big ones right. Would this have changed the game? In Inter’s current form? Probably not. But the transparency for some shred of integrity would be nice. Just follow the fucking rules and kick his ass out, how hard is that? But no, this was a conscience decision from Taggy to keep Milan from going a man down - maybe he didn't want to be accused of trying to influence the game too much, maybe it was a mistake, maybe he's dirty, maybe he's an asshole - until later when he couldn’t justify propping up another player who deserved to get kicked out.

Offsides on Robinho is correct.

Ambrosini non-yellow for a tackle on Eto’o is incorrect.

Abate yellow on Eto’o is correct.

Abate non-call on Eto’o is incorrect.

Abate second yellow and expulsion for stupidity (actually it was for retaliation, I think) was warranted. Pandev reacted at a push from behind and Abate acted like a child while carrying a yellow and only 0-1 up.

Ibrahimovic yellow is correct. I have read one commentator that said a red would be okay, but most have said that red might have been harsh. I fall on the red would be harsh but he needs a fine side of the fence.

Ambrosini yellow on Lucio is correct.

From La Gazzetta: Abbiati and Tags were wearing the same color, which is a definate no-no. I didn’t notice it at the time and don’t know what this means, but I am sure that since I am mentioning it some Milan or Juve spazz-o will comment that I consider this to be the turning point of the match instead of a potentially interesting talking point for us Inter supporters.

I don’t have any problems with the formation chosen, but then I haven’t had any problem with any of the formations that Benitez has chosen. We have been successful at times the last 2 seasons with the 4312, 4231 and 433 with a false “9”.

Player selection was absolutely, incredibly horrible. Materazzi on the field has been a disaster since his bad injury years ago. Zanetti and Santon not used as the fullbacks is a terrible decision. I know some would say that Santon isn’t in form. Yeah? How’s Chivu been working out so far? Maicon? Is Cordoba lighting the world on fire? In my mind, Santon can get better at least. We can build for next season, if this one continues to go badly.

But 4 centerbacks and some defensive midfielders against Milan who have Ibra as their only real goal scoring threat? At this point it might be worth something to be a little bold and try for some balance.

What I think Benitez got correct last night was not playing Cesar and Cambiasso. We need them to be healthy, we need them if we want to win another game. If we can play them during the Champions League game, so much the better.

But discussing tactic and personnel is really whipped cream on manure at this point. The real problem in this game is attitude and we don’t have any. Last season, we had ridiculous obstacle after ridiculous obstacle put in our path and Mourinho essentially told the players to show the world that we don’t care what shit they do to us, we are going to win. This season, it’s bad luck. Or Injuries. Or no purchases.

Let me tell you about January purchases. It’s not going to do anything to help us. The problem isn’t personnel, its motivation. People used to come out of the woodwork when Mourinho was the Manager and proclaim that he didn’t do anything new, that he wasn’t anything “special” and that he used the same formations as everyone else. But from his first week as manager every player was willing to sacrifice himself for the good of the team and run through a brick wall for him. Unless the new purchases are Helenio Herrera reborn, it’s not going to work unless a leader kicks ass and makes people play. That was Marco’s role, but Marco isn’t exactly young and bereft of success, either. Do we need a brand new Marco?

We have Chievo coming up and then Twente in the Champions League again in another midweek game. Chievo always plays us tough and it’s another of those games that one needs to win if there is any thought of climbing the ladder again. After Twente it’s Parma, Lazio and then Werder Bremen before we fly out for the Club World Cup. So, 5 games to right the ship before we add more travel and restless nights. I am not really sure how to feel about this tournament. I would like for the team to win it, but not at the expense of the Championship. Making sure that we finish 3rd should be the new goal.