Share All sharing options for: Inter 1 - Brescia 1: The Seat Officially Gets Hot

Those were the words I wrote before halftime was over. I clearly expected to lose this game due to the quality of play. And I was fine with that. We should lose when we play poorly. Here's something that I found heartening: once we were down a goal, we started pouring forward. Its not much, but it's something. 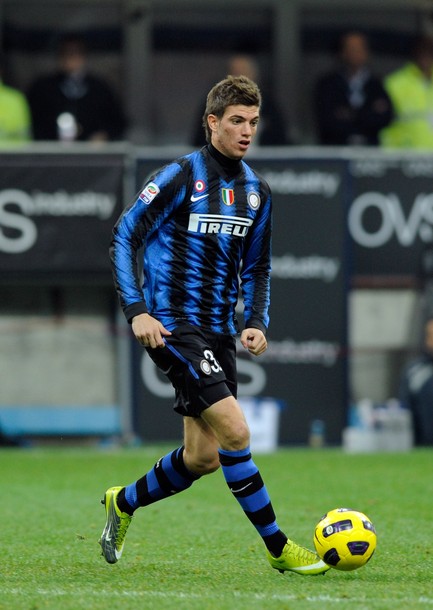 My Inter players of the Game: Santon and Obi. They clearly gave a damn and I don’t think that I can say that of too many people on this team this season – from the Coaching Staff all the way down.

I am going to warn people right now that scores aren’t going to just reflect performance – it’s also about the attitude shown.

Castellazzi: I can’t blame him for the goal since Samuel botched it so badly. As I have said before, he’s a solid keeper and we are lucky to have gotten him in the manner that we did. He saved everything he was supposed to and didn’t make any big mistakes. 6.0

Maicon: His play was poor and his attitude was worse. The only thing worse than his play was Benitez putting Cordoba in for him. That was dumb. 4.0

Lucio: Lucimar played better as the game went on. It was interesting to see who really looked like caring who won. Lucio was one of those. But he still left people alone in the middle of the area. 6.0

Samuel: Walter played poorly but he had a good attitude, so I’ll give him credit. His loss is immense and as a player who has had ACL surgery – if his rehab doesn’t go well he’s gone for the season. 5.5

Chee-vu: In the first half I didn’t like Chee-vu’s play, but I thought that he got better as the game went on. Not a whole lot better mind you, but better. 5.0

Zanetti: Javier wasn’t amazing today and I give him a lot of credit for working hard, tackling, bringing the ball up from defense and trying to drag the team into the attack. 6.5

Pandev: I thought Pandev played okay. He had some nice passes. He blew a chance that was in a little worse position than Milito’s Epic Fail, after Eto’o worked hard to get him the ball taking on two guys and tippy toeing the endline. 5.0

Coutinho: I did not like Coutinho’s game at all. I thought he was too selfish and that he didn’t attack that corner of the penalty area. When Santon came on, he could have used Santon’s runs to the corner as a way to make space for himself. I don’t think he ever looked at Santon running to the corner. I don't know if anyone else is worried, but he's looking very run down. 4.5

Milito: I thought Milito was okay for most of the match, but his last kick really pissed me off. I don’t care if he is clear on goal and the Keeper saves on him – JUST GET THE BALL ON NET WHEN SHOOTING FROM THE MIDDLE OF THE AREA AND INSIDE OF 15 METERS. How much money is this guy earning? How many years has he played for? How many tap in goals has he scored? 4.5

Eto’o: We caught a break on what looked like Eto’o rolling an ankle on the ball after getting jostled but really Eto’o didn’t look very dangerous to score outside of the actual penalty kick. He was able to pressure the backline of Brescia but I don’t recall any great saves from the keeper on any of his shots. 6.5

Obi: I thought that Obi played well and added a presence in the middle. Yeah, I know its Brescia and I know that it’s the kid’s first app so he was bound to be a little hyped. But then again, everyone else was playing Brescia and not all of them played as well as he did for a half. 6.5

Santon: I thought that Santon coming on for Samuel was one sub too late for him. I thought that he should have come on for Maicon – that would make more sense to me seeing as how he’s a wide-ish player and Cordoba hasn’t really ever been. 7.0

Cordoba: Considering how Brescia was playing us – the dreaded ol’ 9-1 formation with one guy up top just trying to outmuscle/outrun a defender and then shoot – Cordoba could have been an astute start taking into consideration his speed. I don’t understand the love of Cordoba as a fullback… I just don’t think that he’s ever been very good as one. As a Centerback I thought he was very usable. 6.0

Eto’o received a penalty that shouldn’t have been granted.

Milito didn’t receive a penalty that he should have been granted.

5 minutes added on was a little short by most accounts, especially considering the stoppages from the Samuel injury – but as a personal opinion, it probably wouldn’t have mattered, this team looked too tired.

“Highlights” is a bit of a stretch…

There was little to like about the beginning of this game. The formation change was heartening as it was an acknowledgement, at least, that some change was necessary. Using Wesley in the middle, Courtinho and Pandev as the outside players along with Eto’o and Milito paired in the middle was definitely a declaration that there was intent to attack.

Also, when we started losing, the attitude got ramped up. It shouldn't take the fear of losing to a newly promoted team to spur, pardon the pun, the team into action. Professionals should always want to win. But, it's a better reaction then nothing. 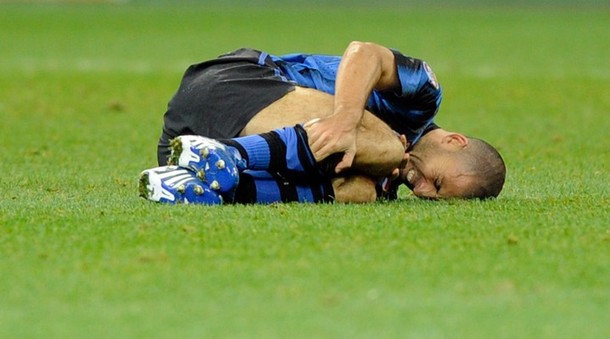 There was more to dislike though. The players looked exhausted from the whistle. Here’s a well known fact that the management staff might have temporarily forgotten – tired muscles injure more often. If you want an explanation for the “Injury Crisis” there it is. You heard it here first: too many games, increased age (for most, Javier is just a freak) of players, too much travel and too little rest all increase the likelihood of injury. Mariga is a young player, I know, but in his entire career he has never played this much or practiced as intensely as he has in the first third of this season.

This is just something that gets my goat – how can players who make millions of Euros per season make a habit of shooting the ball over the goal. It’s just sloppy technique to shoot the ball over the goal, over and over. Inversely, have you noticed that we can’t make a corner kick go over the defender marking the near post? What do these people do during practice? What do these people work on? I can’t get mad at it; I just wonder why we aren’t getting the basics down. These are professionals, and I am including the management in this, right? 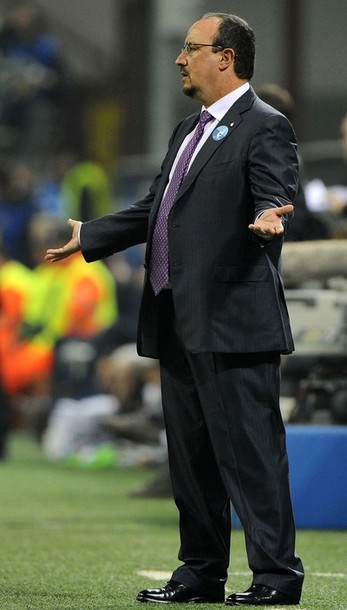 Something else to dislike in this game is a continual absence of defensive shape or form. In this league you simply cannot ask the centerbacks to cover the entire back third. I don’t care who the centerbacks are, they can’t do it, there’s too much space – and remember our remedial checklist from last game: an increase of space favors the attack. It’s basic tactics. In Serie A, a tactical mistake like that is exploited just as fast as it was last night by any team in the League.

One last thing to mention and then I will be completely over this game: Moratti will make a huge mistake by firing Benitez midseason. This isn’t *JUST* Benitez’s fault, as much as I know we all want to see his fat ass Jell-O Wobble off into the sunset. There are too many players on this team who are taking space that another, able player could have occupied to rotate in and rest/recuperate those that needed it. Suazo, Mancini, Rivas and Materazzi won’t be used this season unless the players in front of them in the roster are shot dead. Those four players need to go and useful players who could have rotated in to help preserve the health of others need to be brought in. The goal should be to allow as many players play once per week as possible. With too much dead weight those options are severely limited, the same players have to play all the time and injuries start taking their toll.

Lecce is up in the midweek. Here’s the list of players that are as of this moment out of the Lecce game: Cesar, Maicon, Samuel, Rivas, Deki, Motta, Muntari, Mariga, Cambiasso, Mancini (I hope. I don't care if he can play, he should be out), Suazo. That’s 11 players out of 27 – the 3rd goalkeeper doesn’t count. 8 of these players could start on any team in Serie A. Out of the 16 “healthy” players, 5 of them are born after 1990. People that complain that Inter is too old are going to get a dose of youth (fresh meat?) and all that goes with it.

So here’s the strategy that I would adopt. I would try to rest players against Milan. Unpopular as that might make me; it would allow me to go after Chievo and Twente, the two games after the derby. Winning against Twente almost guarantees entry into the next round – which is essential for our financial well being. And if by some miracle we can beat Chievo and Lecce, it minimizes the damage the draw from last night did us. Beating Milan minimizes that still further... but we aren't going to beat Milan. They have been waiting too long for us to be weak to let this opportunity get by. You heard it here first. If I am wrong, I will include an I AM Sorry Song from somewhere in YoutubeVerse. However, if I am right... well I got a song for that, too.

By the way, if you managed to pay attention to some of my posts from this past summer, you would have already tempered your expectations for this season. I mentioned that a… slight… drop off in quality on all fronts would be the order of the day and I remember asking people how bad a season might you deem acceptable… anyone care to retract or edit their statement from those posts?

My view? If you are a fan of this club, sanity should be the last thing you own. Knowing and accepting that there was going to be a let down this season is the only reason I am not raving. I went through all 5 stages, hopefully for the last time, in August. 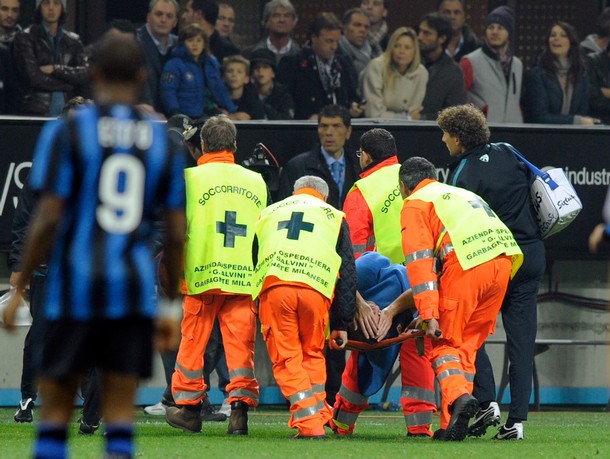