Share All sharing options for: No More Mr. Nice Rafa 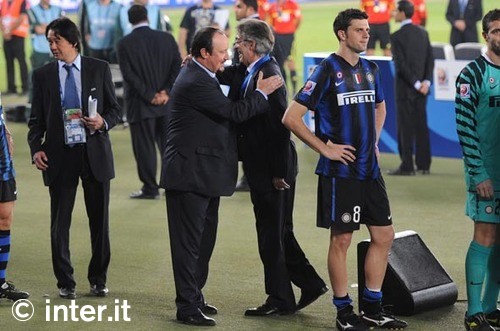 Why cant we just win something and be happy? Why must there always be the coach drama. First Mou's post Champions League defection and now this...

While the rest of the team was celebrating their historic win of the FIFA Club World Cup, Rafa Benitez was talking to the press. And oh boy, did he ever talk. Basically, he is tired of being made the scapegoat. He wants the company to get behind him and make good on the promises they made over the summer: 4 new players. Or else. La Gazzetta did a full two page spread in today's (Sunday's) paper which I have done my best to translate for you all. All I can say is wow, just wow.

As I was looking through photos of the post match celebrations, I realized that Rafa isn't in any of them. Now, this could be because the photographers weren't interested in him, but it seems to me that if he was out there celebrating and bonding with his squad, he would turn up here and there. But nope, the only one I can find is the extremely awkward photo of him with Moratti above, one with his staff, and this: 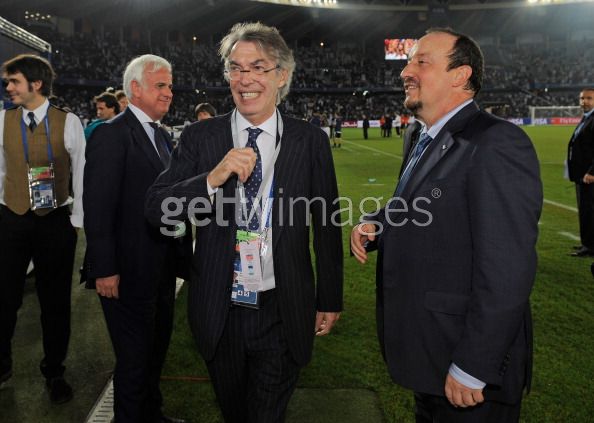 Awkward... You could cut the tension with a knife.

After reading today's paper, his absence on the field may be because he was busy laying down an ultimatum to the club. He just helped them to an historic fifth title and I guess he decided that he just wasn't going to take it any more. Below is my translation of his post-match comments as reported by La Gazzetta dello Sport (Sunday, 19 December 2010, pages 6 & 7 ).

Now he gives the ultimatum. Rafa Benitez's Club World Cup fit of rage comes when the players are still on the pitch running with the Cup while he pours glasses and glasses of bile suppressed for months. Rafa has won. And he vents, explodes. Never seen anything like it. And it seems like a farewell in advance. "When I came here," Rafa attacks "they told me and promised three players to win in the future. No one arrived. In the years past they spent 80 million, not to mention the 50 million the year before: I dont know the financial aspects of the club, but I have had zero. The other squads have spent money, us zero for a new coach: and now I need support, I was disappointed with 100% of the summer market, and I say it with respect because I have always used respect."

Enough names or I go away, Rafa dances on the world: and will not wait for this power struggle. "I did not like to have been put in doubt of my work: I have done this job for 25 years, I have won much and to hear certain things isn't nice. I want the support of the company and the control of the players on the pitch and off."

What does that mean exactly? "What if in summer I was promised three players and now with the injury to Samuel I want four. Having support means not always looking for the guilty party, that the guilty party is not always the coach: I am happy to have won, but it is not possible that around me they talk about a coach or another in my place. I dont know if the company has contacted another coach, but it cannot go forward like this. In the future, things must change: if every week they talk of a difference coach, then my agent is available to speak with the company."

Who goes to the gym? And control of the players? "I want to know what the players are doing. These boys went for two years without going to the gym and they go to make up for the athletic work, and then come the problems and injuries."

In practice, he said the players will go to the gym without telling the coach. And they did it in the past. "The players get knocked out and I am the guilty one? It is easy like this. We have done a study, the injuries come because 15 players are over 30 years old, because 60-70% have already had an injury and, I repeat, there is this aspect of the gym. And in doing so there are high, the highest risk factors. You dont have to hide these things, eh..."

The three roads. Now the question is: if the company doesn't listen, what next? "There are three ways. The first: they give me support and 4-5 players, some before December 29th because we have Napoli January 6th. Two: we continue like this without a project and with a guilty party. Three: I speak with my agent so that he finds an agreement with the company."

Exactly: and if no one arrives on January 31st? "He will choose which of the three ways is the right one..." And if the third. "If I am thinking of saying goodbye? I continue my work that in 25 years has made me win a lot: it is a decision for the company, only the company. If we want to win more we need to buy: I want the support that I have not been given before today."

Moratti knows it, pardon Rafa: and his relationship with Moratti? "A good relationship, I what respect because I always do my work seriously. I spoke with the president after the match with Werder Bremen: he already knows the things I want and that promises must be maintained. If I cant manage to have control of everything? We will see where we arrive: but if you are always looking for a guilty party, then the team will never grow." In all this, a smile. "I dedicate the Cup to my family, who stood by me, to Spain, to the fans of Liverpool who could not rejoice with me in 2005, to the staff, to the players, to Samuel." Is someone missing from the list? Yes, the company.

So, he doesn't say he is quitting... And he doesn't say he will quit (that is a decision for the company), but if he doesn't get reenforcement, he cannot be held responsible for the outcome of the season. Gotcha. I also noticed that he started with needing three players, then four (because of Samuel), then at the end, he wants four to five new players. Never going to happen. I think we will be lucky to get a new defender (that is all Branca says we need). Personally, I would add a real striker and a midfielder to that list, but that just seems like pie in the sky at this point. 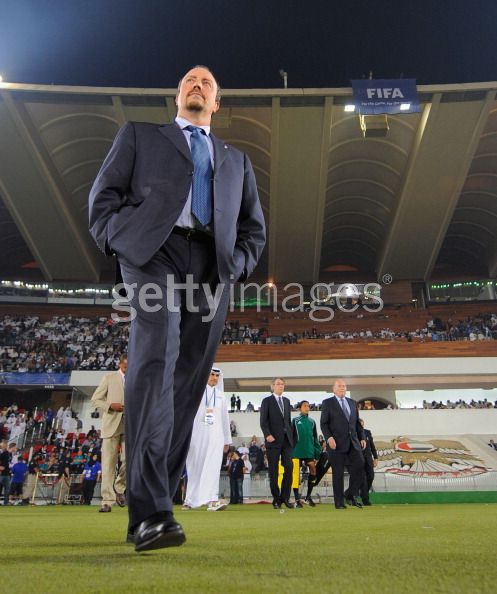 Question is, what happens now? Everyone is on break - which will give tempers a chance to cool. Moratti refused to comment on anything Rafa said after the game ("Now is not the time to speak of the market"), but it is pretty clear that something is broken. Will the club do what it takes to mend the rift? Will he really throw a fit if he doesn't get four players? Or can he be mollified with two?

The players seem to like Rafa - to believe in him... mostly.* That is, at least, they know that he has won things in the past and has been the manager of a big, famous club. They like that. And happy players are winning players. Plus, I still say that given the names being bandied about (now it is Zenga and Leonardo), it is best to stick with Rafa. Everyone can see that we desperately need a couple players... and now, not in 2012 or whenever that new Dutch kid is supposed to arrive. Maybe this will be just the right shove to get things moving.

*(Rumor is that Materazzi really wanted to be one of the few Italian players who won the World Cup, Champions League, and the Club World Cup but Rafa used his last sub to put Mariga in. After that, Marco went directly to the dressing room, only coming out when asked to take photos with the cup. La Gazzetta suggests that Rafa purposefully didn't play Marco because he thought that Marco exaggerated a muscle pull to get out of the Werder Bremen game so he could be fresh for this final. Rafa didn't like that so he froze Matrix out. Materazzi is a force in the dressing room. Mancini knew that. Mourinho knew that... Benitez may be shooting himself in the foot. When asked about the possibility of Rafa leaving, Marco said "Change Benitez? It is the company, that is the strongest in the world, that decides, and it is thanks to them if we are world champions. Inter comes before everything." Not exactly a please stay, boss.)

So what do you think? Is it good that Rafa is finally standing up for himself? Or has his airing of Inter's dirty laundry gone too far? And do you think there is truth in what he is saying? Has he been unfairly targeted as the root of all Inter's woes this season?