While we were here squinting at tiny streams, our very own Maryam was at the Club World Cup games. She got to meet many of the players (envy envy envy) as well as enjoy two fine wins. Below is her take (and her photos - only slightly modified by me) on the game and her experience. Enjoy. 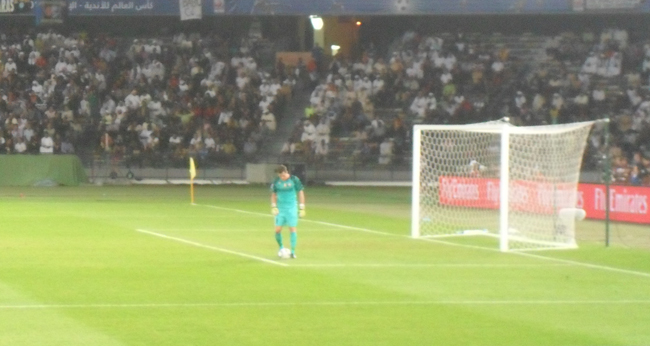 The view from Maryam\'s seat.

As you all must have heard by now, I attended both Inter matches during the club world cup
competition and I absolutely LOVED every bit of this experience. It was my first time ever to watch Inter play live and I am pretty sure that those 2 days have been the best days of my life, and that wasn’t even in the San Siro, I can only imagine what would happen to me if I watched them play in Italy! Before I get started on my feedback, I feel like I need to let you guys know how I actually almost didn’t make it to Abu Dhabi because of my stupid visa. My visa was literally issued on Tuesday Dec 14th at 9.00 am!! I immediately ran out of work booked my ticket for the evening flight and then rushed to the airport after I was done! It was a crazy and hectic break but I loved every minute of it, the whole visa ordeal just made me appreciate being there even more!

What can I say, it was literally a dream come true for me, and there is no other way to describe it. It all happened by luck really. I was supposed to wait till my friend finished work at 3pm to pick me up and take me to their hotel, but fortunately my best friend skipped work that day and said why not drive there now cause we might see them during their lunch hour. Once we got there, we saw a bunch of fans waiting around so we knew someone was bound to appear. 10 mins later Deki appears but he was in a rush so no one could really talk to him. I am gonna be a girl this moment and say he really is cute!

Then Orlandoni and Castellazzi came out together, they were friendly and didn’t mind us taking photos with them. But they too were dressed to go out and didn’t hang around for long. Then I started chatting with a sweet old guy who was called Leonardo. I was telling him that I wish I
could meet Zanetti, and he said really, follow me. I followed him to the pool area where we found two ladies having lunch, he talks to them in Italian and then says let’s wait on the side. A minute later Zanetti comes out to join the ladies. Leonardo asks him if he can take pics with us and he says yes. Now I am gonna be a full on girl and say when Zanetti smiled and said yes to take photos with us I literally felt like rainbows and pinks ponies were everywhere. His smile is really that amazing. HE is that amazing. He was just so friendly to all the fans, and you could feel that he was so sincere when he’s interacting with the us that you fall in love with him all over again! I will forever be grateful to Leo for giving me the chance to meet my idol!

We then went back upstairs only to find Biabiany standing in the lobby bbming on his blackberry! I said hi and asked if he’d mind taking a photo and he said nope. Then we took a break in the lobby and ordered some drinks. By the time we were done, we realized that Matrix and Sneijder were across the hall having some coffee. We went over to say hi and they were just super friendly! We talked to Sneijder about his injury and he basically said yeah it sucks a torn hamstring that could keep him out for 3-4 weeks. We then took some photos and left them in peace. FYI Materazzi is FREAKING TALL! 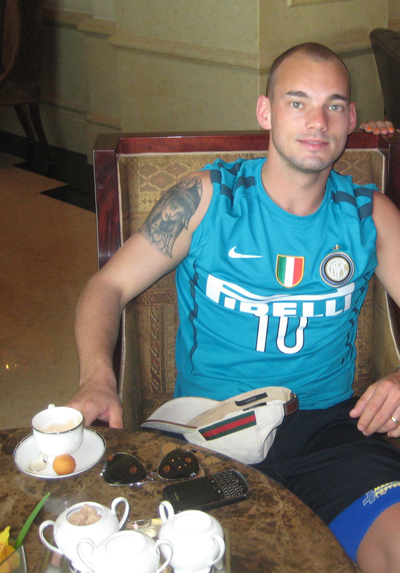 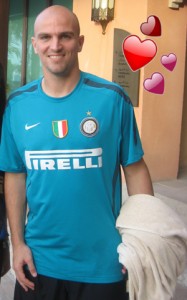 We were about to leave but one of my friends who came late really wanted to meet Zanetti so he said let me go take another look around the pool area before we leave. 2 mins later he calls me and tells me to immediately come down cause Cambiasso was just leaving the beach and said he’ll get changed and come say hi and take photos. I rushed down stairs and as promised El Cuchu shows up and greets us. I just about died because I think he is just adorable and I absolutely love him.

Figo I met outside of the hotel, in the fan zone area just before the semi-final match. One of my friends informed me that the CL trophy was in the fan zone area and that we were allowed to go takes pics with it. As our turn gets nearer Figo shows up next to the trophy!!!! We ask him if we can take pics with him and the trophy and he smiles and nods and waits for us! I am gonna go all girlie on you again and say that he is so handsome and nobody wears a suit like he does!!! 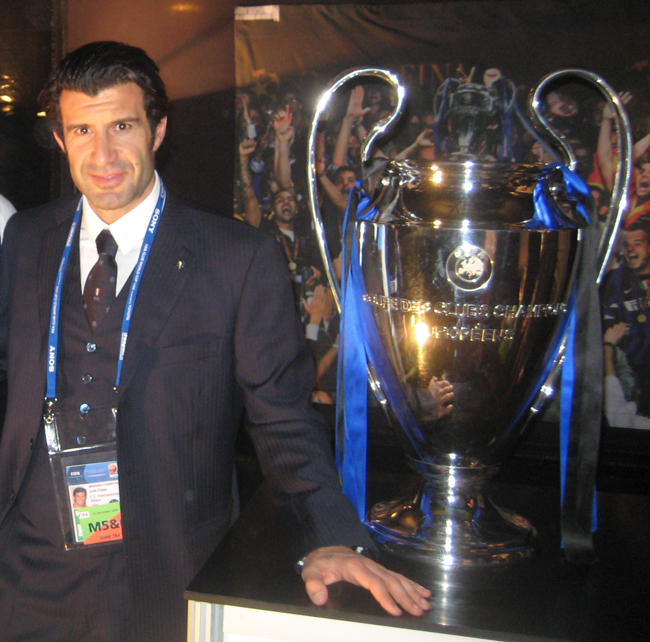 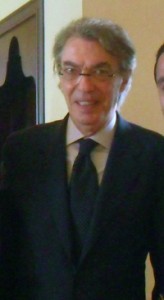 Last but not least I met President Moratti just as I was leaving the hotel. He was in a hurry and pointed at his watch and said he was really late to a meeting. He then stops in his tracks turns round and says ok let’s take a quick picture. Right after we do I tell him thank you so much, and he says “you’re welcome, it’s always my pleasure.” I just wanna say I love him, like I really do. He is just like unbelievably friendly to the fans and you can see it in his eyes how much he appreciates our support of the team. Best president ever? Hell yes!

One of the best aspects of my entire trip was meeting all of the Inter fans. I am just gonna come out and say it, we have the BEST fans in the world! Everybody was in a joyous mood and ever so friendly, which was not what I expected at all! I exchanged contacts with so many people, all of whom invited me to come back and visit them. If you are interested to ever visit Milan, the south of Italy or Napoli ( yes Napoli, lol!) then let me know cause I can recommend to you some pretty awesome people to meet up with! I went to the game with 5 of my friends all of whom were girls, and for some reason we were very fascinating to the Italian fans and they kept asking to take photos with us. I guess its cause we look like a very diverse bunch (2 of my friends are Sudanese, one was Lebanese with blond curly hair and then there were some of us who were veiled so we REALLY stood out.) While we were in the hotel waiting for the players, one lady summed it up the best when she asked to take a photo with me. She just pointed at my jersey and then hers and simple said “Same passion” and it really was. We were fans from all over the world united in sharing one passion, our love for Internazionale!

During the semi final match, we sat besides two of the best Italian fans ever (Giovanni and Mario). They were singing and shouting the entire time, they were just so entertaining to watch. They couldn’t speak one word of English and we couldn’t speak one word of Italian but we somehow were able to communicate and ended up having a blast together. My sister who is not a football fan at all loved the entire experience because she adored the fans and the great atmosphere they created. 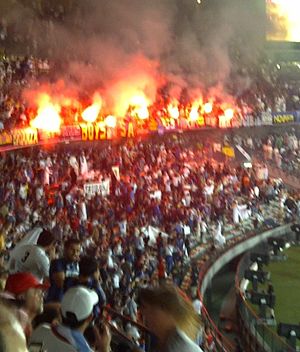 Inter fans in the \

During the final match we sat next to the African supporters who were right next to the Curva crowd. The singing and the music coming from both batches of fans was just AMAZING. My friends who also happen to be Barcelona fans (Yes I know!) attended last year’s match and said both the team and the fans were much friendlier and more fun to be around this year.

p.s seriously though, I am probably scattered all around facebook in Italy right now, the amount of
pictures I took with fans was INSANE. It was so cute how excited they were about the photos!

p.p.s My friends and I ended up appearing in a local newspaper and our picture was like half a page big. It was HUGE. We felt like local celebs the whole weekend!

Be proud to be fans of an amazing team and such an awesome fanbase, hopefully those of you who didn’t will one day get to experience this opportunity for yourselves.

So this is it that was my full experience! Let me know if you guys want to ask anything specific!

Maryam, I think I speak for everyone when I say how envious we all are. I hope you dont mind my little embellishments to some of the photos - I just couldn't help myself.

I am reminded of a conversation I had on the Offside with a man from the Middle East (I want to say Jordan, but I dont trust my memory). Anyway, it was over a picture of the stands during a football match in a country where women are not allowed to attend. He told me that women from his part of the world were not like me, that they dont like sports and wouldn't want to go to the games even if they could. I wish I knew you then so I could jump up and down while pointing at you and shouting "See, see! Women from all over the world like sports!"

I love this game.

I love this team.

By the way, Hamood, I haven't forgotten about you. He went to the Seongnam game and was kind enough to send photos. I will get them up next. I promise.