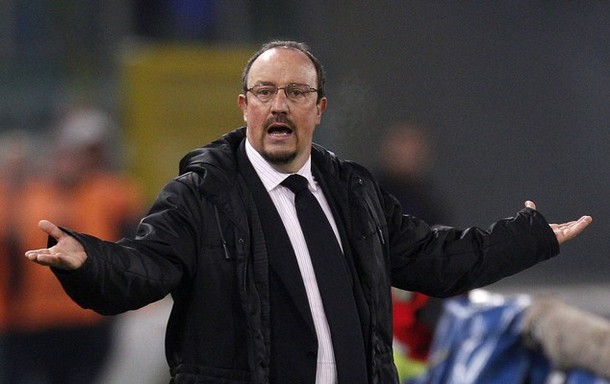 It is official. Rafa Benitez is no longer the coach of Inter. These rebound things rarely work out. As everyone heard every time Benitez held a press conference, he still had deep feelings for Liverpool, and I believe this relationship was doomed from the outset. Better to get it over with sooner rather than prolong the pain and suffering for everyone.

"I am upset about the end of the working relationship with Benitez, but the separation had at this point become inevitable," said the Inter president Massimo Moratti immediately after the official announcement of the termination of Benitez's contract. "All the names linked with the future of the coaching position at Inter are interesting," he concluded.

"I want to thank everyone" were Benitez's words as he spoke to ANSA, "for the support given to me during my time at Inter. I also want to personally thank, on behalf of my staff, the players, the employees at the club, and the fans who had faith in us. The two trophies won were the result of the hard work of everyone who stood by us, as they maintained professionalism, politeness, respect and dedication to the club as their main principles."

"We are very proud of all of this. Despite the obvious sadness that comes when leaving a big club like Inter, we depart with happy memories of the fans who welcomed us back after success in the Club World Cup. It is also my wish to bid farewell to the players, the staff and the employees who, due to the festive period, I won't be able to say goodbye to personally over the next few days”.

“To all of them, and to the club and fans, I wish the utmost sporting success in the future. Finally, it is right that I should thank President Massimo Moratti for having, at the time, chosen me to be the Inter coach."

I know, there will be many of you who feel Benitez was misused by the club (and I think you may have a point there), but I think that with his statement after the World Club Cup, he was essentially giving his resignation. He is a profession football coach and I think he knew that after calling the club out, by demanding players, there was no way he could continue on. I think he did it on purpose.

I would like say I will miss him, but I never really felt like he was fully committed to Inter, that his heart was really in it. I suppose I just never bonded with him. I tried (maybe not as hard as I could have), but there was just no chemistry. Which I think sums up his tenure at Inter quite well. It just was not meant to be.

Goodbye Rafa. Good luck and thanks for everything.