The headline reads: "Inter, what a change. The Portugese is a fan of the new coach. 'He is a great. Support him like with me.'

And low, Special has spoken. Question is, will the Iteristi listen?

We all know that there was very little love lost between Mourinho and Rafa. When it was announced that Benitez would take over at Inter, Mourinho famously said: "One thing is sure, Benitez will not do better than me." And, as it happens, he didn't. With Leonardo, though, it seems things are slightly different. La Gazzetta dello Sport caught up with Mou while he was on vacation with his family in the US. He was concise and unequivocal with his support for Leonardo:

"Last season Leo was proven to be a coach of considerable potential: a great professional, not a Milanista. He has spent many years at Milan and now he will do the same at Inter. With the same passion. Support him. I ask all the Interisti to welcome and support Leo as they did with me."

Right now, I guess the only staff Leonardo is bringing from AC Milan is Angelo Castellazzi, although there is some speculation that he will offer Paolo Maldini a job on his team (wouldn't that be a kick in the pants?!?). Also, there is some talk of Lele Oriali coming back now that Benitez has taken that bad man away (hooray). Anyway, Leo has already spoken to many of the players (Maicon is apparently going to put off have the insides of his knee cleaned out so that he can be available for the new coach) and has toured La Pinetina. The official presentation will be on December 29th with work to begin shortly thereafter.

Julio Cesar seems to be on board with Leonardo, saying: "He will do very well. Besides being my friend, he has Inter charachteristics. It is also imporating because he know Italian football very well. I think that it will be fine."

But then, he was never someone I thought would have a problem with this. No, the people to watch will be Materazzi, Stankovic, and maybe Cordoba. If Leonardo wins them over, the rest of the squad will follow. 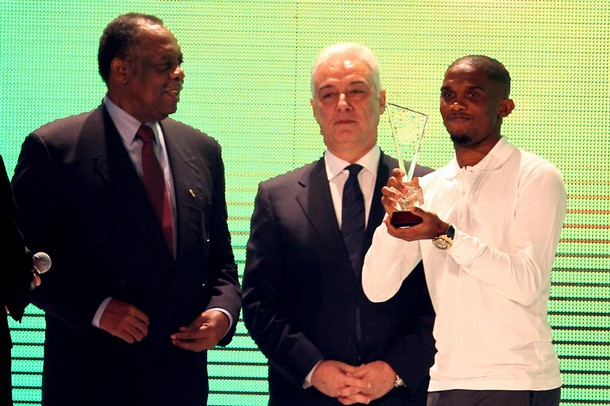 In the world of the players, Inter has more "best of" squad members. First, Eto'o was awarded African Footballer of the Year 2010 for a record fourth time by the African Football Confederation (good work, Eto'o!). Then the Dutch newspaper, the Telegraaf voted Wesley Sneijder as the best Dutch football player (not quite the same as the Ballon D'Or, is it Wes). Deki Stanković was named Serbian Player of the Year for the second time. And finally, Pandev has been voted the Former Yugoslav Republic of Macedonia's foreign-based player of the year for a record fifth time.

So, kudos all around!

Also, if you haven't, go and vote for your UEFA Team of the Year. We need to mobilize the Inter Offside Army to ensure that some Inter players make the final team.

On a personal note, I am going on vacation for a week. I will have a computer with me but I just dont know if I will have the time (or the inclination, really) to put up any posts. You never know, though, it could rain a lot or something. So, just a warning, next week could be a bit dry on the post side of things. Just bear with me for a few days, though, as I will be back to my blogging self in the new year.

How about this until we have something better to talk about: