Share All sharing options for: Lazio v Inter: Time to Cowboy Up 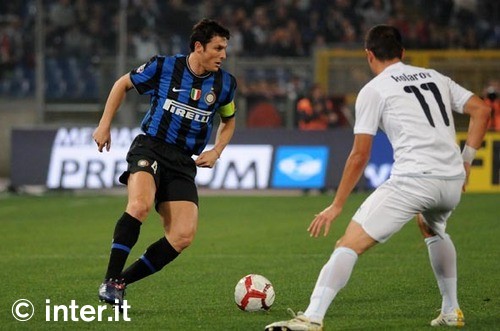 Er, right. Tonight is Thursday, not Wednesday (as I previously believed - dont ask), so we have a game in mere hours. And I have a preview to write. Not a whole lot has changed since our Parma game - Inter is still scrambling to find uninjured players to field (strikers are so overrated, especially those who score) and we are all still struggling to understand Rafa's football vision. The big difference, of course, is our opponent. Lazio has had a dreamy start to the season and are looking to continue their fine run and race for the top. Parma is not bad, but Lazio is no Parma. Lets just leave it at that.

What: Inter v Lazio (yikes)
Where: Stadio Olimpico, Rome (did I mention? They have a pet eagle)
When: Friday, December 3, 8:45pm local time (11:45am pacific, 2:45pm eastern)
How to Watch: Live on FSC and bunches of other channels. Or, you could find a stream: MyP2P, Rojadirecta, Ustream, and ATDHE.net
Liveblog: Absolutely! Be here 15 minutes before kick-off.

This is a tough fixture. One Inter doesn't often win. Of the 68 Serie A meetings in Rome, Inter has only won 18. They have drawn an additional 28, but 22 losses - that is what really stands out to me (and not in a good way). Even so, these last few years have been good to us: Inter hasn't outright lost this tie since 2003. Last season was the infamous did they/didn't they game. You see, Inter and Roma were neck and neck for the championship and a Lazio win would practically hand Roma the scudetto. Something Lazio fans were not too keen on. Inter ended up winning that game 0-2, but I, for one, don't believe that Lazio players threw that game. I know Inter players took the match seriously. Thiago Motta even got injured. Anyway, Inter won, Roma didn't, and the rest is treble history.

Highlights of that game:

I dont think there will be any "Oh Noooo" banners during this game.

There is a vibrant and well-written Lazio board here on the Offside. If you would like to know more about this from the Roman point of view, take a peek at Cathal's preview. This is his last (boo hoo), so get it while you can.

And that is pretty formidable. Floccari is having a great season and Hernanes has been a revelation. Edy Reja has found a winning combination that sort of has me shaking in my boots. They are not unbeatable, though. Sampdoria managed to do it, so did Roma. So it is not hopeless. 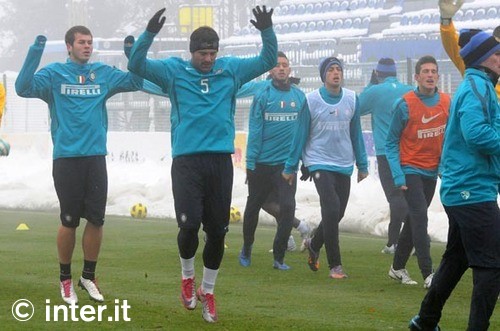 How about another hat trick, Deki!

Here are the 20 players we will pin our hopes on:

Players are slowly but surely finding thier way back to the pitch. This game sees the return of Muntari which is a step in the right direction. Still, Benitez had to call up five youth players: Gallinetta, Biraghi, Benedetti, Nataline, and Alibec (Wow, that's a lot). Chivu, Julio Cesar, Maicon, Milito, Obi, Samuel, Suazo, and Mancini are all still injured. Oh, and Eto'o is suspended. Yikes. But who needs a striker anyway? They are totally over rated. We have midfielders. Yep. Chunks of midfielders.

So what is Rafa going to do with these guys? Well, there have been some rumors that Rafa will start Cutie Natalino and if that means that Cordoba gets to play central defender instead of right back, then I am all for it. As for the rest, who the heck knows. If ever there was a time for a Grand Imperial Poobah of All Things Inter, this would be it because I am stumped.

So please, predict away.

No presser today (which really confused me). I guess the one yesterday about the World Club Cup was supposed to cover for this game as well. Still, Rafa is very good at saying nothing during his press conferences so I guess we can go without it.

As for the game, I am trying really hard to stay optimistic and up beat. Lazio is on fire this season and I really dont want Inter to be the next team burned. Plus, we need to stay up and confident for the Champions League and the World Club Cup to come (Moratti says that is our number one priority after all). And we cant count on lucky deflections every game. Still, it isn't like we cant win this game - it is totally possible. Deki is feeling good, and Thiago Motta is a welcome addition back to the squad. Muntari may not be the best player in the world, but he is a damn sight better than poor Santon in the midfield. Plus, it means the back line can shuffle and Materazzi can sit down for a game. Which is definitely a plus (and I write that with love, Marco). All we need now is for Sneijder and/or Pandev to actually score a goal.

More training in the snow on Thursday: