The Frog Man Cometh and The Andreolli Strain

Share All sharing options for: The Frog Man Cometh and The Andreolli Strain 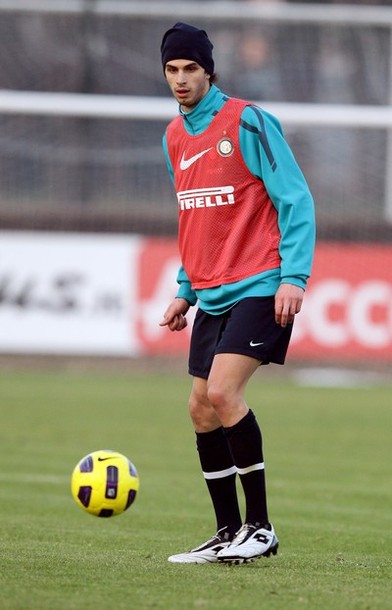 It has been official now for a few days that Andrea Ranocchia is an Inter player. So for those who want a little primer on the newest Inter defender, here’s a quick howdoyado.

Ranocchia is typical of the current type of player that Inter is bringing into the team lately: tall, physically powerful and much younger. If we were to field a defence of Maicon, Ranocchia and Santon; Maicon at 6’1/2” would be the smallest and at 29 the oldest player back there.

The Frog Man (22) was born in Assisi in the province of Perugia, which is in the region of Umbria. If you’ve heard of Assisi before, it might be because you are/were Catholic and paid attention during CCD or have met a Franciscan Monk.

Anyway, Andrea played his youth ball with Arezzo in Tuscany before becoming a senior starter in Serie B and the next season in Serie C. Genoa bought half his rights and sent him back to Serie B as a member of Bari where Andrea started to turn the heads of those who don’t hire scouts, like media publications who started to notice him. Genoa completed the purchase and left him in Bari for the next season where he and Bonucci, who was unfortunately also sent to Bari on a co-ownership deal through Genoa as a result of Inter buying Motta and Milito would form a very successful and complementary set of centerbacks.

By the way, I would still make that deal again in a heartbeat. It’s just a shame that of all the players that we sent to Genoa in this deal a young defender would come through as the potential good player we let get away, considering the history of great defenders that walked into a blue and black striped shirt, decade after decade.

This past summer Genoa recalled Andrea and then entered into a co-ownership deal with Inter. If everything worked out the way we all thought it would, I would be writing this little history lesson in the summer not after having just shoveled my driveway for the tenth time this month.

But things don’t always work out the way we plan them. That’s why the words “surprise” and “unexpected” were invented, I guess. Walter Samuel has suffered what might be his last ever career threatening injury so we desperately need a center back that can play day in and day out and is under the age of 35.

Because Inter has been trying hard to curb their spending to qualify for European tournaments, the amount that is paid for transfers is important. It seems that the monetary footprint of Ranocchia is a little more than 18 million € for both halves. If Ranocchia works out to be a significant contributor for the rest of this season and into his career than it isn’t a bad deal. All indications were that Andrea was settling well in Genoa – a bigger club than Bari where he first showed his stuff - before the winter break so the thinking is that he’s a low risk - high reward type of investment. There is a good chance that he becomes a stalwart for this team. Andrea’s father is reportedly thrilled that his son landed at Inter.

Considering our current situation, and at the risk of beating a dead horse, I keep thinking how unlucky it was that no one thought that Bonucci was worth keeping. Inter didn’t. Genoa didn’t. It wasn’t until he had a chance to play enough to work out the kinks in his game against consistently high enough competition that anyone saw what he was worth. It’s a shame really. I hope we aren’t so stupid in our handling of Destro. Both players would have solved some problems – on the field and in the pocket book - for us this season if we hadn’t had to go all in and try to win it all last season. Not that I mind the results mind you… I just want it both ways I guess. 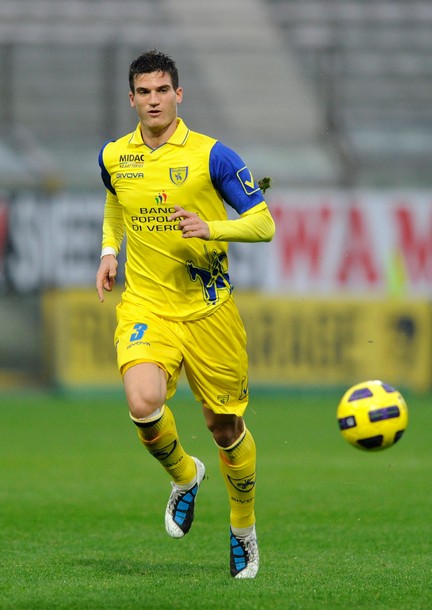 Marco Andreolli is a defender that currently plies his trade at Chievo. Previous stops have been Padova, Sassuolo, Vicenza, Roma and of course Inter where he spent some of his youth development.

Andreolli came to Inter in 2003 when he was 17 and played in the Primavera team. Two years later he had made his first start on the senior team. He was considered a promising, somewhat injury prone young player but he wasn’t in Chivu’s class so he, cash and ½ his card went to Roma in 2007 with Chivu coming the other way. A year later the other half of his card also went to Roma, I want to say as part of the Mancini deal, but I am not 100% sure about that off the top of my melon. Roma sent him out on loan to Vicenza, I think for half a season. He went to Sassuolo the next season where he played almost a full term for the first time in forever. He would go back to Roma after that and played as third or fourth choice center back for a season. He left Roma, finally healthy, but a step farther down on the bench after Roma took Burdisso off our hands.

Andeolli has made at least one appearance at each level of Italy youth National team from U18 to U21 (where he made over 20 caps) which should describe how big a prospect he was considered when he was young. Playing regular football at a Serie A club has boosted his value again and Inter apparently have a feeling that his injury riddled days are behind him. Or that we are super desperate. You know… which ever.

I think that it’s safe to say that this is a purchase for the future and the bench when Marco and/or Ivan are ready to hang up the boots and call it a day. So any day then, right? It’s also a purchase with UEFA restrictions in mind since Andreolli spent 2003-2007 (ages 17 – 21 I think) with the club.

A lot of people, including me, were sad to see Andreolli leave when he did as he was starting to play in Coppa games and gain some confidence. But it’s also worth pointing out that he suffered a lot of serious injuries while at the club and with other clubs too – and those things take a toll. It wouldn’t surprise me a jot if this thing never works out and Marco Andreolli never returns to Inter. However, lets start expecting some loans and co-ownerships to start making the trip to Verona soon.

Inter is rumored to have picked up 2 youth players already this winter, both from Brescia. Lorenzo Tassi, a 15 year old midfielder/attacking midfielder/support striker/fantasista and Nicola Leali, a 17 year old goal keeper currently on the U18 National Team. The Brescia advertising machine had dubbed them the “New Baggio” and the “New Buffon” respectively.

At least one player, Tassi, was highly rumored to be a target of Milan this past summer but Inter bought both for around 3 million €. I would also be on the lookout for young Inter players to start making their way to Brescia sometime in the future as Tassi was rumored to be worth something like 3 million € by himself not to long ago.

There is a rumor that Inter have out positioned other Italian teams for 18 year old prospect from the Ivory Coast, Junior Tallo of Chievo. I don’t know where he plays but he’s one for the Primavera team.

There were two other Eastern European teams that were supposedly picked up this winter already, but I don’t have names or positions for them right now. 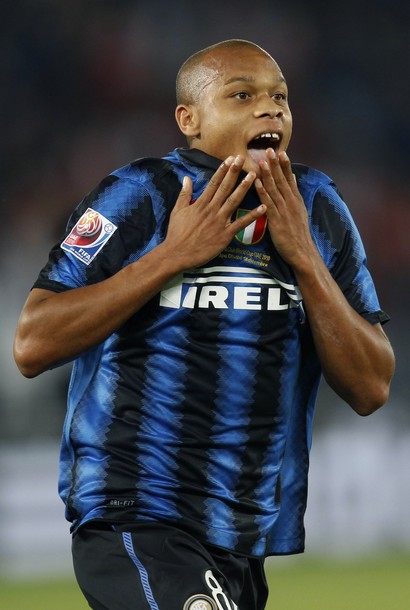 Just to be a thorough there are several rumors surrounding Biabiany. Biabiany is supposedly the make weight to see Sanchez arrive or he’s supposed to be shipped off to Sampdoria for some reason. Personally, I don’t think he moves because Leonardo likes to play with 3 in the front and Biabiany can play on the out side of the forward line and not many others here can. Besides, Udinese make their bread by over charging as much as possible for players... it's just better not to buy from them if you can help it.

Mariga’s agent has stated that Inter have taken a lot of questions of availability from other teams and has turned them all down. I like this rumor since it suggests that Inter have plans for Mariga who I thought was just coming into his own before he got injured. Btw, he apparently is lighting it up in training this week. 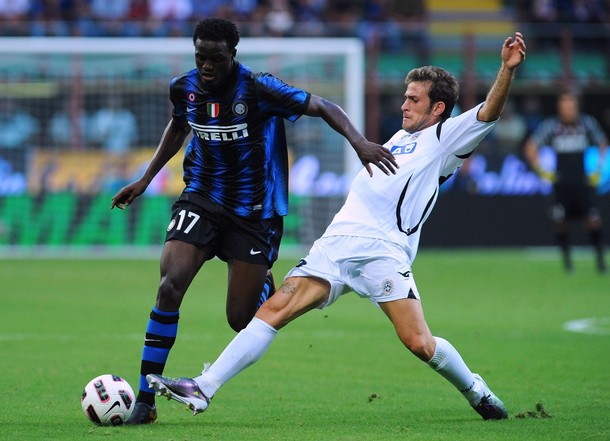 There is also more persistent rumors suggesting that the newly married Muntari gets shipped back to England for close to the 16 million € that he cost. I don’t see this happening soon as the plague that hit the midfield this fall is still fresh in everyone’s mind.

Santon’s agent says that his client has garnered a lot of interest from other teams, especially Genoa, but his client has specifically stated that he wants to stay at Inter and fight for regular playing time. Also there is a rumor that Inter would trade Santon for Zaccardo. I can only laugh and pray that this is not serious.

Oh and I would bet that Kaka isn’t coming here either. Real Madrid isn’t as dumb regarding players as they usually are since Mourinho showed up, although they did let van der Vaart go.

There is a rumor for Marco Veratti who is an 18 year old playmaker from Pescara. I have never seen him play but the buzz on him is very high.

There are lots of rumors about Macheda leaving ManUre for an Italian team. Inter are of course in the mix because, even if Inter were on the moon they would be the subject of transfer rumors.

The Lazio defender Radu is in the last season of his contract – or close to it – so rumors of his leaving are prevalent… and if there is a transfer rumor than Inter must be involved. I would love Radu at Inter, but it isn’t happening.

Adriano isn’t long for Italy. Rumor has him taking his fat ass back to Brazil by June at the latest.

And lastly, for this post anyway, Torres to Inter for around 50 million €. It ain’t happening folks. 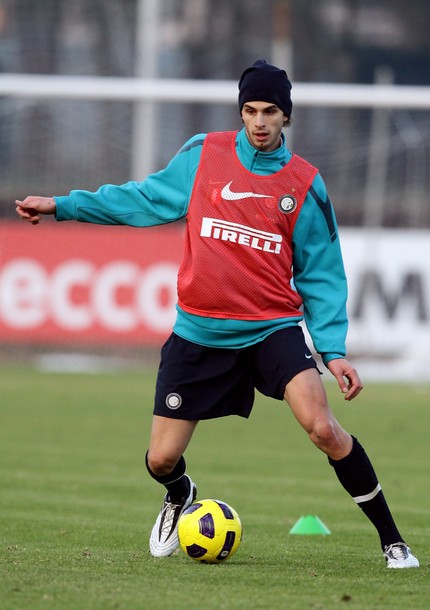