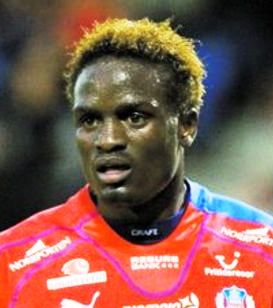 Making up the game from January 31st, Parma and Inter drew, scoring a goal apiece, in a game that featured contrasting halves.

Inter had the best chances in the first half with shots coming in fast and furious. Several good shots from Goran Pandev and Milito tested Parma keeper Mirante but he proved to be equal to the task at hand.

The second half, perhaps harkened back to the Fiorentina – Roma game from last weekend, in which Fiorentina clearly dominated Roma only to lose, Bojinov tapped into goal a ball that had already been deflected twice and saved once. Completing the metamorphosis from the safe counterattacking 1st half in to the much more wide open second half, Mario Balotelli needed only 120 seconds to come into the game and score.

A Parma player, Francesco Valiani, sent off after a second caution, and Marco Materazzi finishing the game on one leg completed a tough, slow starting, not particularly pretty game.

There are no Inter Players of the Game today. It’s not that everyone played badly – although there are a few individuals I would like to point out later who I thought did play badly - it’s just that no one stood out to me as playing really well. 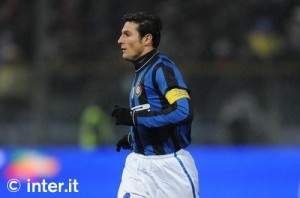 At the half I think I remember the graphic that the TOP was dead even, which means that as the game was winding down, and we were either losing or drawn, we definitely were going for the win. I think that some substitutions made, very late in my mind, also increased our ability to keep possession.

Cesar was forced into 4 saves, according to the stats, but really he made two really difficult ones. One saved a goal and the other only put the goal that Parma did score off a second or two. 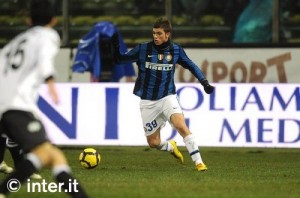 Julio Cesar: As I said, he made two difficult saves yesterday. One saved the game. 7.0

Maicon: Personally, I thought that Galloppa made life tough for Maicon until the Parma midfielder had to be subbed off. Maicon wasn’t able to duplicate the nice crosses he put into the area during the Cagliari game, plus I thought he took a poorly thought out shot late into the game. He was on the edge of the box and we had 3 guys in the area. With our strikers – you look to pass if you are a fullback. 6.5

Materazzi: At his age and relative fitness, he shouldn’t have been able to play as long as he did without injury. Those who have been paying attention have already noted that Marco gets hurt after a little action. He should have come out instead of Cordoba. I don’t blame the goal on either center back since it was so fluky. 6.5

Cordoba: His place on the starting roster an hour before gametime worried me and I don’t think that I came away game impressed with his performance at left back. 6.5

Zanetti: If anyone wanted a win this game and I am not sure that there were too many players who were, it was Javier. He pushed the ball up early, he made himself available to bail out Maicon on the right line and he kept on pushing late when everyone was tired. 7.0

Cambiasso: So many players were having such a shitty game, it’s almost redundant to single people out… having said that, Cuchu really tried to do his thing yesterday. He was running as crazy as he could considering the unfriendly weather, he was trying to anticipate the passing lanes and he was directing traffic through the middle. He was doing it okay. If we can get him going, if we can get a late season surge from him, that would be huge. 7.0 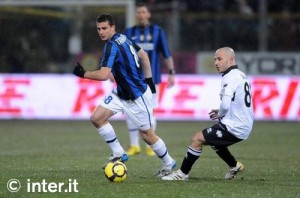 Motta: I noticed again that none were too happy with Motta’s performance, even though he almost scored on a nice header and he made passes that a so-called thug shouldn’t be able to make. I thought he was okay, you know, the theme for this game. 6.5

Pandev: He was a one man wrecking crew in the first half. Then he got tired, lost his positioning or both – I don’t really know but his likeness was on a milk carton the second half. 7.0

Eto’o: In the first half of the season, Eto’o scored about 10 goals all told, I think. He’s been a ghost since he came back. He hasn’t been back a long time, but he needs to shoot more than once a game. I can’t fault his effort or passing, though – so at least we are getting something from him. 6.5

Milito: He gives high effort and he looked like he got behind the defense at times to look dangerous but he just couldn’t or wouldn’t pull the trigger. I still thought he was the best of the forwards up there. 7.0

Mariga: Mariga made another cameo and it looked like he could have something that we need, but we will have to see more that just the few minutes that he got. N/A

Santon: I thought that Santon should have started. Having said that, he looked very good when he was in. I don' t think that it was coincidence that when he and Mario went in, our playing speed and aggressiveness went way up. 7.0

Mario Balotelli: It took him 120 seconds to score an ugly little goal in an ugly little game. He did some good after that, but it wasn't what I was expecting would happen. He missed a volley ugly, and if he didn't try to volley it, he had Milito wide open - it was shameful how wide open Milito was considering all the goals he scores. 6.5 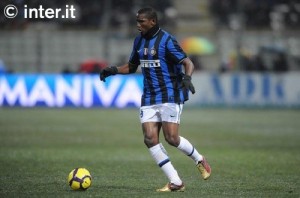 This was a game that we thought we could rotate players in. Parma hadn’t been doing very well lately, we have Champions League stuff coming up soon and we already had Coppa games the last few weeks. It’s pretty obvious that we thought we could give the rickety Thirtysomething Samuel a rest and the Teenager Santon a chance to catch his breath going from not playing for 3 months to starting every game.

I am not even saying that I thought it was a bad idea. Rotation is a part of life at this level as there are just too many games – for some of us, anyway, by my count, and I count the winter break because they could have played then, Milan has gone over 50 days in making up their game with Fiorentina – that players’ bodies just need to recuperate.

For their part, Parma played the dreaded 9-1 formation. I don’t fault them because they had issues of their own and they desperately needed points after their very poor run of form. But, the reason that coaches use it – even us - is because it works. Pack your own area and hit on the counter with a blazing fast forward and maybe you get lucky – but you sure do hold the score down.

Players, managers and even commentators here have said that the draw was a fair result. I don’t know how fair it was, but I didn’t think that either team was particularly dominating. I thought we created in the first half, but results matter. No goals when we are attacking well, means no win just as if we got no goals when we refuse to risk much going forward. It makes me feel a lot better to see that we created something and were off target than to not see any creativity at all, is what I am saying.

I am just not that broken up about this game. A draw is still a point and 9 points is an extremely good lead to have in the table this early on. Don’t believe me? Go on and take a look around at some of the other leagues in Europe and tell me you wouldn’t rather have what we got. In any event, Parma will battle to end up in the right hand half of the table, so it's not a terrible away draw to have to suffer. 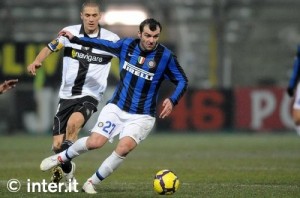 Everyone will rave and drool about Biabiany because of his scintillating speed, but I am not at all impressed. Every shot was wide or poorly placed. Every cross was waaaaaaay out there. No pass found its mark. In other words, what we have here is another Suazo – built like Tarzan, play like Jane. Our only hope is that, unlike Suazo, he learns to be more technical.

Jimenez, Jimenez, Jimenez. Some idiot sportswriter once wrote about some player that the player “flattered to deceive”. What the sportswriter meant was that the player looked better than he was – which is not at all what the phrase actually means – but the sportswriter’s meaning is appropriate here. Jimenez can dribble, shield, hold up the ball, pass and look fantastic while doing it. But he doesn’t do it in such a way that is terribly effective. Jimenez, if one was to look as his ratings, played an excellent game… so excellent that the Parma goal came off of a ricochet and a deflection that he had no part of. He doesn’t come back to play defense at all and he always seemed a little soft to me.

In fact, he reminds me of the way that people used to talk about the youth prospect Pele that we traded + cash for Ricky. At the time people were bemoaning the loss of Pele and how great he would one day become because his talent was huge… Where is that guy now? Has anyone heard anything about him in the 2 years he’s been gone now? If he was such a great talent and prospect… shouldn’t we have gotten some news or something about this dude? The last I heard was that he couldn’t break into the bench squad at Portsmouth in the EPL, for gosh sakes.

That’s how I feel about Jimenez. If he’s so great, surely that greatness would have manifested itself sometime by now, as the player - 25 years old - enters his prime years.

And to bring this thing to a close, it has come to my attention that British magazine World Soccer has a large spread on Inter in it. Apparently it has come to the attention of the English speaking world that we exist. We are such a foreign concept as a team that they have a rundown of the player and little capsules on what that player does. Somehow it seems a little inadequate for players like Materazzi and Lucio – players whose professional careers spans decades and each owns a World Cup trophy. These guys shouldn’t have to be introduced to a supposedly football savvy nation. Yes, that sarcasm you might hear dripping. However, in it’s pages you might find a break down of the Inter front office and you can perhaps discover who is in charge of what, if you didn’t already know. I know I learned something new.

This was from the weekend games. I love these guys. 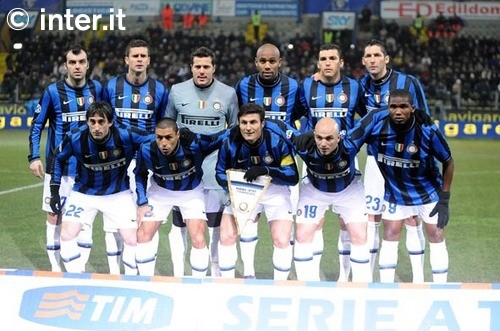