Inter 0 - Sampdoria 0: It's All About Little Multicolored Colored Paper Bits

Share All sharing options for: Inter 0 - Sampdoria 0: It's All About Little Multicolored Colored Paper Bits

Having 2 players sent off for one team is bad. Having 3 players sent off and 6 players booked is worse. But having to watch a game that had all that plus a team that is supposedly competing for a spot in Europe that couldn’t score with 2 men advantage for 35 minutes and at least a one man advantage for 52 minutes is just eye watering terrible.

Making me want to stab my eyes to stop the burning was the fact that the team with 9 had the best chances to win. By far. By really, really far. And that’s wrong on many levels. 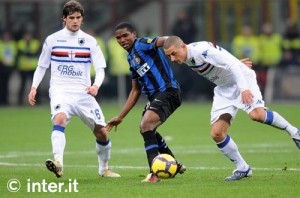 Before I begin, let me say this: Yes, I thought our boys did a wonderful job last night rising to the occasion and showing Samp and The Asshole Ref that they weren’t be able to steal away 3 whole points. They got 1 – but only because our shooting was really off. They couldn't get the whole Piñata.

Although I would seriously like to say that Cesar is fucking amazing.

But really Samp should have kicked our asses. And I mean but good. When Cordoba was sent off - yes I though that there was a great audition for the Summer Olympics in the Dive Like a Little Girl Competition – I knew that we were done for. I thought, “They forced a close game in Siena, they tried to put us in the hole in Bari, they tried to hold the score down in Milan, they forced us into schedule congestion in Parma, they denied us at home against Juve and they denied us in Napoli and now they are going to sink us at home, just to make sure that we know our place and don’t have the nerve to complain again.”

But the Samp goal that I was expecting didn’t happen. It should have. The teams chasing the top should be hungry and young, possibly more physical then technical. The teams at the top should be players in their prime or just after with the wonderful blend of savvy, technical skill and still ripe physical ability, but perhaps threatened by the younger teams’ hunger and limitless energy. There was no hunger. There was no energy. 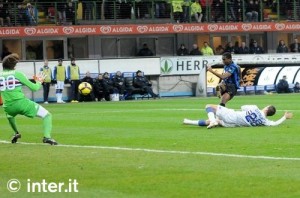 That was what I was expecting. What I got was meh passing and very little meh shooting. The Samp shooting smelled. I mean it smelled bad.

On the other hand, Inter didn’t panic. They defended as anyone who is 2 men down rightfully should: 7-1 formation. But the weird thing was that as the game went along; me, Inter, the old lady watching the game for the first time; we all realized that Samp weren’t going to attack, they still left 4 in the back and they were really lucky that they had a goalkeeper who played the absolute best game of his life. And that Eto’o played what might be the worst game I have ever seen him play – which means he still almost scored.

And this bothers me. It bothers me because Inter should lose when they are 2 men down. Samp shouldn’t look as impotent as a middle aged man with a beer gut, 16 chins and a full 6 month prescription of Levitra . They should have come across the midfield line like a pirate crew in port after being at sea for 6 years infesting the Bunny Ranch with sacks full of doubloons…

And like said pirate crew, they should have scored, a lot.

Not that I am wishing my team defeat. One point, in such circumstances, is quite a feat. Hell, I thought getting a corner kick was a success and I was vocal about it. But Samp should have been more willing to come forward. Samp should have put Inter to the sword. Samp should have had the talent, the will and the ruthlessness to score one goddamn goal on a side with 9 men. We are talking about the 5th best team in Serie A after all. They are exactly 1 point away from Champions League money - currently. They shouldn’t be the equivalent of a limp dick. They should be a tough team. 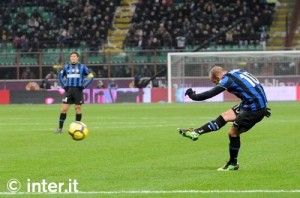 This brings me to Europe and the lack of success for Serie A and what this has to do with this game. I don’t hold the Champions League in the same regard most others do, mostly, as I have said repeatedly elsewhere, since it’s not really a League of Champions anymore, but a giant money grab and is to be treated as such.

But since the organizations – if not several of the actual players - are still Italian I usually try to support the Italian teams, although some of those teams – including my own - make it hard for me sometimes.

Anyway, given that I would like to see Italian teams do well in European Competition on general principle and given that Limp Samp is now a contender for this competition, I don’t see much hope in the near future. In my opinion, there has to be some high competition in the domestic league to provide incentive for the individual teams to spend money on facilities and somehow acquire player talent and managerial leadership. I am not just talking about Inter here, but also the other teams of Serie A. Has there been a significant influx of talent in Serie A to bolster the midtable teams and press the top teams? Maybe one or two like Napoli or Palermo, but really I am not seeing it.

Long and the longer of it, a team like Samp shouldn't be this high in the table. This lack of competition isn't doing anything but weakening the league and ultimately forcing more money and talent to exit the peninisula. As much as I am against the current Champions League on principle, I am all for money and talent preferably siphoned straight to Inter. The general weakness of the league was definitely highlighted Saturday.

Okay, having given my general reaction, overall to the game on Saturday, a quick word on the refereeing that I know we are all still amazed at.

These are only my opinions. I am sure that we all have our own thoughts on the subject matter. Feel free to discuss intelligently in the comments, if you can.

First of all, I don’t think I have read too many, if any, comments of the tone that those red cards were not in fact red cards. Even Cordoba’s second yellow, theatrically embellished as it may have been, was a dumb play by someone who should have known better. Samuel’s straight red, though probably the correct call was a bad reaction by the ref who had painted himself in the corner.

Here’s what I mean. If the ref hadn’t tried to be John Wayne and clean up this Serie A town, and instead had quiet words with players who made first or early offences, this game would have been about 22 or 21 guys and a ball – the event that we tuned in to see in the first place – instead of about 1 guy and his multicolored cards. 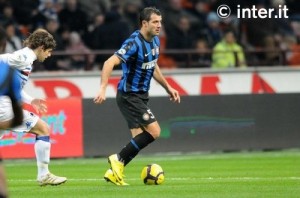 Samuel was a perfect case. Samuel got his yellow by going for the ball, touching the ball and then going through the player. There was no intent to hurt, obviously, or a guy as ripped and built like Samuel could have crippled that clown. If the ref had awarded the free kick and said to Samuel, “Next one is the card or worse, cool it.” It might have been more useful trying to calm him down rather than ramping up everyone’s tension level.

The same could have been said to Cordoba when he leapt at the free kick. Spirits were already high and the ref could have managed to salvage a decent game by warning Ivan, “Look, you are really in danger of hurting your team. You are too hyped up, so I am going to warn you that you need to take it down a little.” Maybe it might have helped to soothe everyone instead of making all the players more anxious?

And there will be people who will rise up at this and complain that Inter don’t deserve special treatment. But I am not asking for special, I am asking for same. Or have we already forgotten Sneijder getting a straight red for criticism and Boriello getting a pat on the cheek for the same offence? Have we forgotten Totti telling a ref to fuck himself before finishing the game?

But there’s more. Eto’o getting a card for simulation was just funny. Not because he didn’t dive, he went down easy as sin, but how many of you here saw the first derby game and witnessed Ronaldinho fall down in the middle of our area – without a touch – and then saw him lecture the ref when no call was forthcoming? Result: no card for Dinho. There are dozens of examples here. ADP comes to mind as well. So does Menez and his lack of cautions. 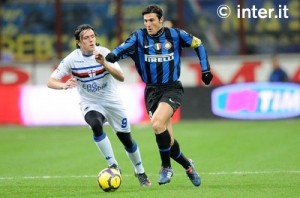 So I thought that the ref did the product on the field no favors through his own ineptitude. Fine. I can live with that. As I said, it’s not that we got calls against us that bother me, we will get our share of calls against us: some good and some bad – as long as we all get them, I don’t really care. I think Mourinho is doing the right thing here. There are newspapers that will be scrambling on Monday and Tuesday to make something up for all the space that is normally reserved for Inter. Let the Media get frustrated and put pressure on the league. It's about time someone else gets that pressure. I would like to see the Media blackout last longer, but I don't think Moratti likes these tactics. He's too nice a guy and he likes to see Inter in the news. 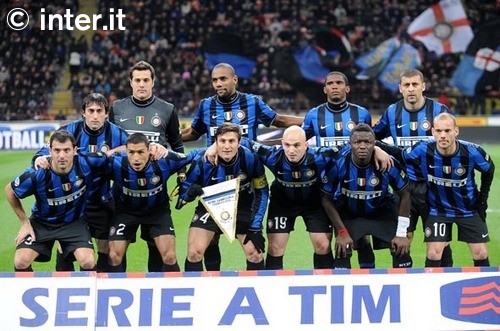