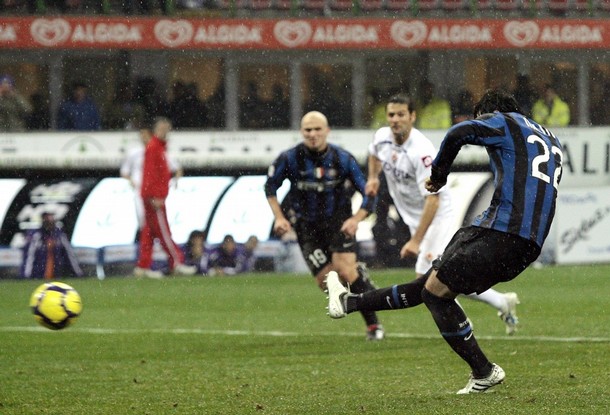 Finally, Inter get to play a game. After having last Sunday's game called for snow, I am more than ready for a little football - even Coppa Italia. It is clear that Mourinho is always interested in winning - no matter how congested the calendar is. For their part, Fiorentina is a formidable opponent. They are a well-run talented team who are more than able to put Inter into real trouble. The only real question is, how badly do they want it, because I am sure Mou will throw everything he can at them. These Fiorentina fixtures are always slightly troubling for me. I dont think it is a secret that I have a large soft spot for La Viola. Still, when they come to play Inter, there is only room for one in my heart - but I will feeling badly for them when (if) Inter crush them.

What: Inter v Fiorentina
When: Wednesday, February 3, 8:45pm local time (11:45am pacific; 2:45pm eastern)
Where: San Siro, Milan
How to Watch: GolTV will be broadcasting this live, as is ESPN360. If you dont have access to either of these, find a stream: MyP2P, Rojadirecta, Ustream, and ATDHE.net
Weather: Nippy (35°F) but dry.

Fiorentina and Inter have not met in Coppa Italia since 1996. Still, we have a bit of a Coppa Italia history together. We have met 9 times over the years, and usually, Fiore kick our butts - even at the San Siro. Of the 4 times the two teams have played in Milan, Inter has won 1, drawn 1 and lost 2. Our record is even worse away. Inter has yet to win a Coppa match at the Stadio Artemio Franchi (2 draws, 3 losses). So lets just put this game away tomorrow and turn the page on this terrible history.

Our last meeting was too long ago for youtube so we will have to make due with our last Serie A meeting. That one ended a very lucky (for us) 1-0. There were many missed opportunities on our part and, but for a Gila wonder miss, things may have finished differently:

There is a well-run and followed Fiore board here on the offside so if you want to see things from a purple point of view, I suggest you pay them a visit.

Donadel is disqualified, Mutu is suspended, Zanetti and Kroldrup are injured, while the new wonder kid, Keirrison, is apparently not quite ready (although he did train with the team today).

Fiorentina have had a bit of a sticky January. Despite doing well in their Coppa games, they have dropped 8 points this month in the Serie A, including a draw at Cagliari last week and a thumping away to Palermo the week before. Apparently Cesare Prandelli is looking to this tie to revive and reset the team after these two results. He said:

"It is a semifinal, therefore a game with feeling. We know we face the strongest team in the leage but we will try to put them in difficulty. They are in an extraordinary moment psychologically, us, we have nothing to loose, the only thought is to tkae the field and play a great game. We want to continue to grow in so many ways... We also reached the semifinals in the UEFA cup, but this is another story, it is a game that can make us change our mental attitude: we need to play an important match to regain trust, morale, and conviction."

For us, a lot depends on whether or not Gila has his shooting boots on and how their back line is feeling. They haven't kept a clean sheet since they played Atalanta December 6, and 5 goals in two games makes me hopeful we can score a couple ourselves. On the flipside, Fiore dont seem to have much trouble scoreing, and with Jovetic back, they may cause real trouble for us. I hope Toldo is up for it. 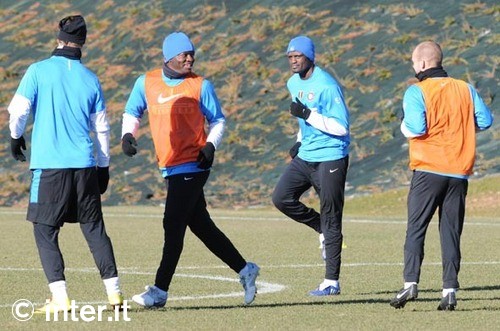 Look! The Mariga has already made a friend! First days can be so awkward.

Mourinho has called up all available players - even the new guy:

Stankovic and Eto'o are still injured, although Deki is hopeful for Sunday (he trained outside today!). Usually there are more youth players on the list, but they are tearing it up with the Primavera squad at the Viareggio Cup (they won their first game 4-0 with goals from Obi, Stevanovic, Beretta, and Alibec).

Mourinho spoke a bit about possible lineups today in his presser, pointing out that given our schedule this month, there would have to be some rotation. For instance, all our defenders will get a run out at one time or another. He was a little more concrete about a few players, naming Toldo, Lucio, Sneijder and Milito.

That leaves us with a lineup probably quite similar to what we saw against Juve last week:

It will be interesting to see whether Mariga makes the bench or Krhin gets a run out. I know Mou wants to win this thing, but we have three championship games and 9 points on the line next week. There just isn't any room for error this month. None at all. Right now is when we truly need players like Krhin and Quaresma to step up and provide depth or we will never make it to March 1 unscathed.

Well, that is about it. Sorry I dont have time right now to write something more in depth, but between my tight work schedule and the fact that we have a game every three days this month - I feel pretty lucky to get anything up at all.

Tee hee. I know, look at Pirlo and Cannavaro, but, well this just makes me giggle to look at it - fates be damned!