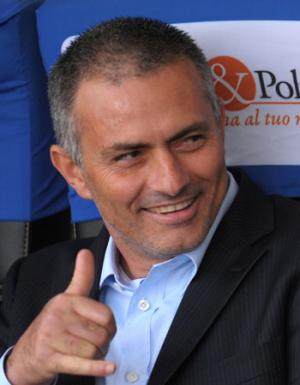 Not in the teams’s performance. We should know that even if we hadn’t heard him say it. Here’s the clue that we all should have picked up on. At half time, Mourinho removed Muntari, added Pandev to the front lines and went to the 433 from the 4312. Part of that was Muntari who has been fighting a bad back and needed to come out. But another part was that we had been threatening all night to score more than one and Pandev was there to help tip us over the edge.

He didn’t, but he came about as close as one can without scoring… sigh.

Mourinho wasn’t happy with Mario, we knew that too, when he took him off the field and Mario went straight to the tunnel bypassing the rest of his teammates and boss. I thought that Mario had a slight injury – but La Gazzetta said that he lost a contact. Whatever it was it prevented him from going to his assignment on defense – and nothing gets you in Mourinho’s shithouse faster than not playing defense. If you recall to a post I wrote earlier this season about Mourinho’s strategies and tactics, it included We Will Play Defence. It didn’t necessarily include: We Will Attack. There is a message here.

So he wasn’t necessarily happy with the performance, he was pleased about the scoreline – although he was quick to add that it was only a slight advantage and he wanted a bigger one, he certainly wasn’t happy with Mario… so what was Mourinho happy about? 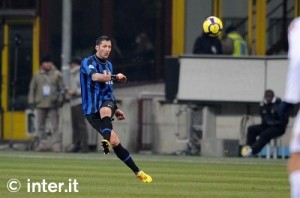 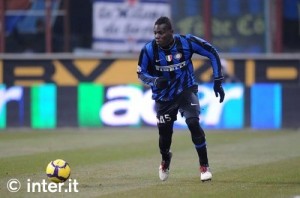 Toldo: Toldo was tested not at all last night. I don’t recall one shot that he had to leave his feet to save. He did start to warm up to the game as it went on, though. He got more confident and commanded his area more and more. 6.5

Maicon: There was a comment during the game that rang very true to me: Sometimes when Maicon has turned over possession he stops and rails at no one for a bit then jogs down the field. I would rather he turns around and tries to get the ball back. On the other hand, Maicon did his defensive duties adequately. I have to give him credit for that. 6.5

Lucio: Lucio was very good last night limiting Gilardino from being fed from his teammates. Gilardino had to drop further and further back to try and receive some service and it didn’t work. Yes, he was caught out of position a time or two but the trade off is that he stopped a bunch of attacks cold. Besides, our team covers for each other very well. 7.0 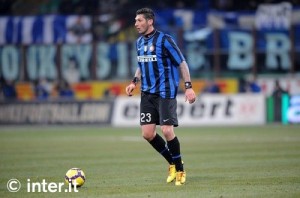 Marco: Marco had a wonderful game last night. He attacked the ball coming into the area and he made some nice passes to the front rank. But don’t read too much into this. Marco is very fresh – this is only his 8th appearance on the field (only 2 full games as 6 apps were as subs). Still it was nice to see. 7.5

Santon: Davide continues to make me hope that we have the fullback situation figured for the season. He was confident in the tackle and he was not beaten off the ball, consistently making his man distribute instead of shoot. He even pushed forward, although this is where the rust appears. He doesn’t look in sync and he doesn’t look confident in the other end of the field. 7.0

Zanetti: The first few minutes of this game looked as though we might take it easy and coast a bit. And then Javier started working his ass off to win tackles, to shield while dribbling and to push up. Once he started everyone else started to pick it up. He would win the ball and the players closest to him would suddenly activate and move to get open so that they wouldn’t be the ones to waste his effort. The pace of our game was set from his metronome. That, ladies and gents, is a leader. He didn’t yell. He didn’t scold. He had an idea for the world around him and the will to make others fit it to his idea. 7.0 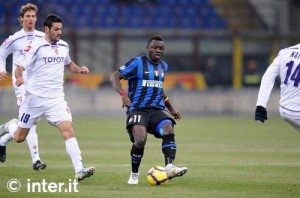 Muntari: Like Cambiasso, I think that the small injuries taking a toll. I also think that this hasn’t escaped the notice of the Boss and the Big Boss hence the scramble for another midfielder. Obviously he wasn’t feeling right, because he wasn’t his usual devil–may–care self. It would also explain the early exit. 6.0

Sneijder: It’s become, for me, fun to watch Sneijder constantly run and twist around bigger, slower players and then make a nice pass or shoot. What I think is really great about his game last night is that he can dribble, pass and shoot and then when he’s done all that, he’ll cut into the area and just cause chaos around the goal mouth. I like chaos. 7.5

Mario: Mario was the most dangerous man on field for us. Fiorentina had no answer to him and they couldn’t cover him. The problem is that he’s also the least disciplined player on the field for us. The very qualities that made him attempt the outrageous passes, dribbling moves and shots that he made last night – the arrogance to think that he can actually pull it off and the recklessness to try them in the first place – were the very qualities that made him leave the game early. 8.0 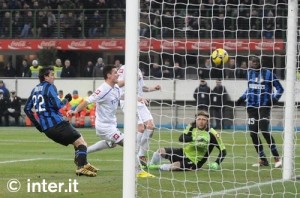 Milito: Diego has really won me over to his effort, his drive and his skill. It’s funny, he’s almost the Anti-Mario. He works hard on defence – he’s won about 2 balls per game right around the area and yesterday was no different making a wonderful chance out of absolutely nothing but hard work. He made passes to Sneijder, Pandev and Mario, setting them up to score even though he’s really our best sniper. It looked like he scored a second goal off of a deflection from a Pandev shot but Sneijder, who I thought was on the ground, was called for obstruction/offsides. If the ball hit Sneijder this is a good call – but I didn’t get a good look at it. If the ball didn’t hit Sneijder, then it’s a mistake and a poor call. I’ll have to try and get a better look at it. 7.5 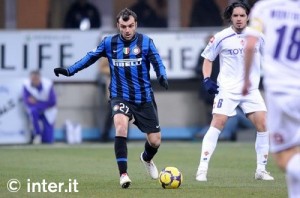 Pandev: Goran came on at half time for Muntari serving 2 purposes. 1. Hunting for the second goal. 2. Send the message that 1 goal is NOT enough. The message was received and the attempts were made, it just wasn’t going to happen. 6.5

Motta: Thiago came in for Mario. I thought that Thiago did a very decent job in the little amount of time that he had on the pitch although it’s clear that the majority of Inter supporters don’t agree with me. N/A

Mariga: Clearly he came on just to get an idea of the team in a game setting. He wasn’t going to do anything in the 6 minutes or so that he had on the field. N/A

Look, the game was a Coppa match. I thought the first half was great for a Coppa game, but the second half was definitely a let down. I think that Mourinho really wants this trophy. And I will be honest with you – I would like to have it too. It’s been too long since we have won it and frankly, it’s been annoying that we haven’t placed a bigger priority on it. We should have the manpower to challenge for this thing every year. It should be a bigger deal. 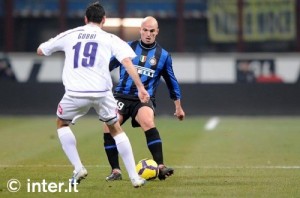 Mourinho’s very, very happy and so am I. Mancini is loaned to Milan, but that’s not the best news. The best news is that the way he’s been bad mouthing the team and burning all his bridges to the extent that he’s not coming back. He may be returned from loan, but he’s never going to put on another black and blue shirt.

I hated this signing when it happened, although I thought that there must be a reason for it. There was, it just wasn’t a very good reason. And we paid way too much for this joker. I mean way too much. Waaaaaaaaaaaay too much. I can’t express how much more we paid than he was worth. It was like… okay, okay you get the idea.

Thankfully, he’s now gone. And he’s been replaced with Pandev, another attacking player with technical ability but this one has a work ethic and chemistry with the other attackers. 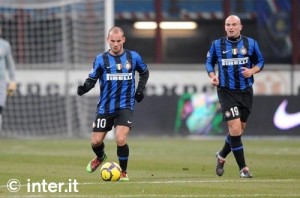 I have to say, that looking at the roster right now, it’s about as solid as it’s ever been. All the players that are listed, with very, very few exception – Ricky – can start and we won’t lose much for the exchange. It’s an incredible job that has been done by the coaches and the front office – and this is the incredible part – to change the roster almost from top to bottom and do it while winning.

Mourinho has said that he chose to keep players longer than he wanted because he knew that the supporters and the Media wouldn’t tolerate growing pains of a revolutionized club. Considering the actions of The Media when a single loss is suffered… I think that he was right on the money. I still think that the sheer amount of change, for the better, is astounding.

February 1 Inter’s Primavera beat FK Jedinstvo 4-0 at the Viareggio Cup. The scorers were: Joel Obi, Samuel Beretta, Stevanovic and Denis Alibec. The first 2 goals came off of a Stevanovic crossbar and cross respectively.

Yesterday, Inter’s Primavera played the second elimination round of that tournament and won 1-0 with the goal coming from Mattia Destro – Mr. Right scores again. They beat the Serie D representative but I can’t find an actual name. Next up is A.P.I.A. Leichhard Tiger, whoever that is. Right now, Inter Jr. has a commanding lead on their elimination group. 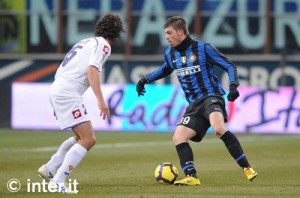 All these names should sound familiar if you’ve been paying attention this season. 3 of the above players have played with the first team at some point this season, even if only in friendlies and the Romanian, Alibec, was the big signing of the Primavera this past summer. When was the last time that the Viareggio cup was won by Inter? 2008 and that was Coppa Carnevale #5. Fiorentina and Milan have won the most at 8, but neither has won in about 10 years. Juventus won 4 since 2003, including a win last season to bring their total to 6. It has been an objective of the President and the front office for about 10 years now to win more youth honors and, as a by product, have a better youth players. Inter has 6 Primavera Scudetto including 2 in the last 10 years.

Why am I bringing this up now? The Coppa games that we play are often populated with youth players, such as Mario, Santon – who started his senior team career from a good Coppa game with Roma, remember - and Donati from the Livorno game. With the Viareggio tournament going on at the same time it seems like a natural progression. I am going to try to incorporate more updates on the Primavera in general in future postings but sometimes there just isn’t as much info on it. 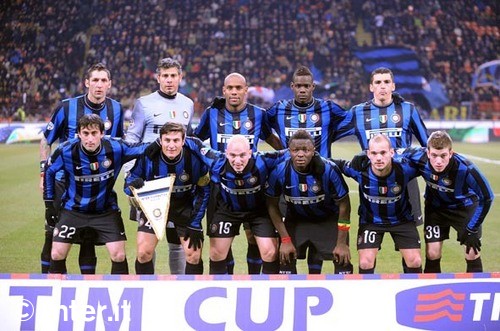