Inter - Cagliari: Yes We Can

Share All sharing options for: Inter - Cagliari: Yes We Can 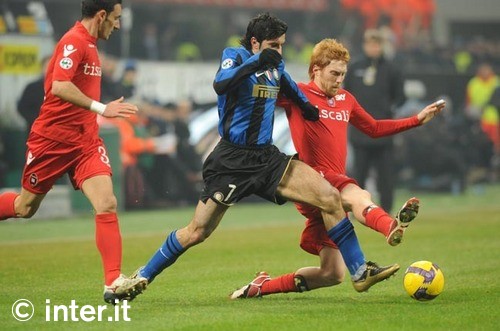 Cagliari come to town to try their luck at the San Siro tomorrow. They have done well this season and, at eighth place, may well have visions of Europe dancing in their heads. Three points would do them nicely. Inter, on the other hand, have that home record to think about. Cagliari was a tricky opponent for us last year, and that together with our spate of suspensions/injuries and grueling schedule mean that Inter are going to have keep on their toes, dig deep, and behave like the champions they would like to be. This is potentially a 9-point week for us and we need every single one of them.

What: Inter v Cagliari
Where: San Siro, Milan
When: Sunday, February 7, 3pm local time (6am pacific, 9am eastern)
Weather: Dry and a bit warmer; low of 32F, high of 39F. I dont think this one will get snowed out.
How to Watch: No TV but it will be on ESPN360 or you could try a stream: MyP2P, Rojadirecta, Ustream, and ATDHE.net
BTW, if anyone has other streaming locations, please share so that I can add them to the list. Thanks.

Overall, Inter has a pretty good record against Cagliari: of the 70 total times the two teams have met, Inter has only lost 12 times (6 at home, 6 away). Still, last year Cagliari was one of the few teams we just could not beat. This fixture finished a very frustrating 1-all draw last year. For whatever reason, Inter just could not score. Highlights (if you can call them that):

Not much to do here as Jeremy is doing a fine job over at the Cagliari board. Pay him a visit for an islander's view of the game.

Cagliari have been enjoying a fine run of form and have not lost a game since a trip to Palermo way back on the 6th of December. They have managed 2-all draws against Roma and Fiorentina, and a 3-all against Napoli - although all those results were at home. Away, they are a bit less prolific, usually only scoring 1 goal (except against Milan - they got 3 there).

Coach of the year Massimiliano Allegri has called up 20 players:

Matri, Jeda, and Nene have all been spectacular for Cagliari this season. Matri has 10 goals and is starting to attract the attention of some larger teams. Similarly, Nene with his 6 has caught the eye of Milan. Jeda has one less goal but with three assists is also indirectly deadly. This is no pushover team. They are well-run and hungry; their only real weakness is that they tend not to score much away from home. Still, they have only been held goalless in two games, both way back at the beginning of the season. 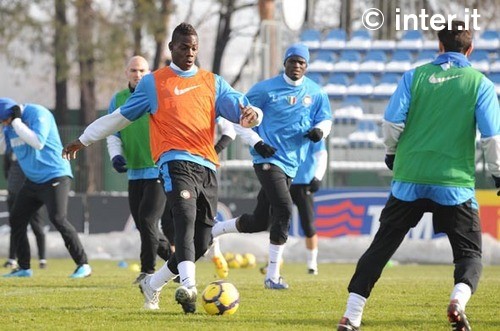 With all the snow Milan has gotten this past month, I bet Moratti is glad he sprung for all those pitch improvements at La Pinetina.

Everyone is in retreat tonight as all available players have been called up:

Stankovic and Chivu are still injured. I thought Lucio would be available for this game because Parma would be the game he was disqualified for. I guess not. On the up side, Sneijder will be definitely be back next weekend for Napoli (thank goodness).

For this game, though, we are in a bit of a pickle. Our only vice Sneijder is still Deki and he has yet to find his way back from injury (although he is close, it seems). With two midfielders and two defensemen out, Mou is making noises like we may see a 4-3-3 tomorrow, although he was a bit noncommittal. All he said for certain is that: "Four players who will certainly be on the field tomorow? Julio Cesar, Cordoba, Samuel and Milito."

The journalists asked a number of times after Julio Cesar - which was worrying. I didn't know there was ever any question about JC's fitness, I just thought Toldo was playing for rotation's sake. Well, Mou said that JC was fine (whew) so I guess crises averted. Toldo was ok against Fiorentina, though... 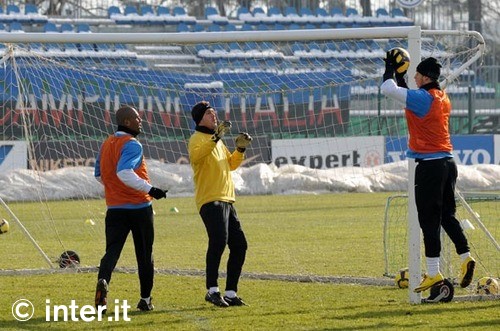 Er... handball? See, JC is just fine - they really shouldn't scare me like that!

So that leaves us 7 to fill in. Provided Mou doesn't mean for Cordoba to be a surprise leftback (shudder), it could go something like this:

Now here is where I admit my secret shame: although I am glad to have Mariga, I dont really know what position he plays. I mean, I know he is a midfielder (duh), but I dont really understand where he would slot in. Maybe I will find out tomorrow.

Much of the press conference today was also about Balotelli. Mou very clearly pointed out that despite what the press may think, there is no rift between Mou and Mario, and that neuron quote from Mariga's presentation had nothing to do with Balotelli. Moratti even got in on the act pointing out that Balotelli was a great asset to the club and everything is hunky dory. And I am sure it is.

These are all manufactured controversies - much like the outcry when Mourinho gave his crucifix to a disabled child last season. Everyone was too quick to judge and they all assumed the worst. Everyone picks apart everything he says and does with an eye towards spinning it to maximize the drama. My SO and I often joke that if Mourinho said his favorite color was blue then the headlines the next day would be: "Mou Slams Red!" The trick is, not to fall for the hype and read the quotes for yourself. As Mou himself said, if he had a problem with Balotelli, he would leave him off the squad. The fact that he is playing means there is not a problem.

To recap - tomorrow is a tricky game against a team with nothing to lose and Europe to play for. On paper, there is no question we have the better team, but papers dont play - humans do and humans are not so predictable. If we can get through these next three games with full points, we will be in great position in the championship and can maybe think a bit more about Europe ourselves. A little help from Fiorentina and Bologna wouldn't go amiss this weekend, either.

A nice youtuber has thoughtfully uploaded the whole Inter v APIA Leichhardt Viareggio game in 10 minute chunks. Here is the first one: