In Milan, Inter went ahead in the 6 minute mark from Pandev’s foot and then doubled at the 20 minute mark from Samuel’s head. Milito added one more right after the break at the 47 minute mark and that accounts for 3 of Inter’s 7 shots on goal. This was a one sided affair and excepting two moments this game was all Inter. As a result of this weeks result, Inter continued to stay in the Crow’s Nest of the Serie A table + 8 over Roma who sit at 2nd.

There was some “controversy” to the game. It came at the 34 minute when Santon poked the ball through a Cagliari’s player’s leg right to Marti who was behind the Inter defence. Although Matri would have been offside if his teammate passed the ball to him, since it was a defender who last touched the ball he was onsides.

In all fairness to the linesman, there was a jumble of bodies and Santon was off his feet when he poked the ball through –Domenica Sportiva, an Italian pundit show, on Sunday night showed the view of the mess from the sideling, the incident was completely blocked from his view. The ref had a better angle but he didn’t allow play either. I don’t know if Cesar had let up on the play because he thought it was offsides or if he gave a genuine effort and the ball went in anyway. Either way, Cagliari had a real effort at goal that was taken away. I had thought that we had been called offsides when we had a player through on the keeper, but no one else has seen fit to report it and I haven’t seen a moviola on it.

My Inter Players of the Game 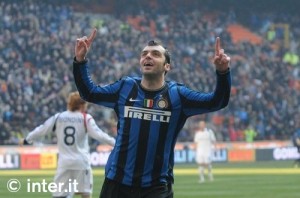 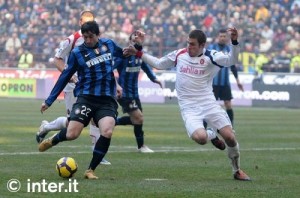 Right before the Milan Derby I posted that Inter has an aggregate +7 in yellow cards head to head. That means, in all the games that we played this season, other teams have gotten a total of 7 MORE yellow cards than we have in 20 games. Since then, we have gotten -1 (only if you don’t count a second caution as a yellow – otherwise this would be a -2) and -2. This means that since the derby, that number now becomes +4 over 22 games.

When I posted before the derby, we had a +1 aggregate advantage on penalties (5 for, 4 against). Since the Milan Derby, we are now even (5 for, 5 against).

When I posted before the derby we had gotten, on aggregate, as many red cards as those that we played, we are now at -2 over 22 games.

What does all this mean? These 3 categories - red cards, yellow cards and penalties - represent, to me, the most overt ways that a referee decision can “help” a team, even if that decision is innocent of partisanship. Considering the continued calls by other, less knowledgeable “fans”, that Inter gets favorable referee decisions, these numbers suggest that this isn’t the case. Especially if one were to put these numbers next to other top teams in Serie A.

For example, Roma has been granted 6 penalties this season – making 5 – but have only suffered 1 granted against them. That would give Roma +4 penalties on aggregate – since I am only counting the ones that make a difference. This would suggest that Roma get as many penalties as we do, 5, but suffer much fewer penalties against - 1 v 5. And remember, this is a Roma team with Burdisso on it.

So who is getting the favors around here? I’ll let you all reply in your own heads, where this question has a chance of being answered truthfully. 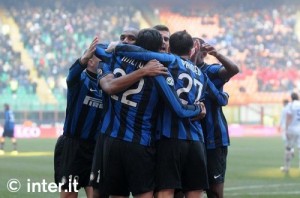 Cesar: Wasn’t troubled at all until the Matri incident. Right after that he made an absolutely incredible save. 7.0

Maicon: Maicon is at his best when he’s going up and down the line – attacking and defending. He assisted Samuel on the corner and made himself a nuisance on the right. 7.0

Cordoba: I didn’t think that Cordoba had a great outing but it was adequate. He was caught lacking once or twice but he also showed his quality on occasion. 6.5

Samuel: Walter had a nice goal that I am sure the excitement of scoring was a relief from the sad week he had after the death of his brother-in-law. He had a nice day defending as well. 7.0

Santon: Excellent work along the left lines. He brought the ball up the field nicely and he defended well. 7.0

Zanetti: The first goal was the result of the work that Zanetti put in. During the Coppa game I noted that he set the metronome. He did it again. 7.0

Cambiasso: I thought that this was another adequate game from Cuchu. He out-worked any of the Cagliari’s midfielders but it wasn’t up to his quality. 6.5

Motta: Motta did a lot of the dirty work on the pitch going back and helping the defence, then going forward and passing well. I think many Inter supporters were unhappy with his play. I was just fine with it. 6.5

Pandev: Man of the match by most accounts. He worked really well with Eto’o and he has worked well with Milito these past 5 games. He has 3 goals and 2 assists. 8.0

Milito: Milito’s goal went like this: Eto’o to Pandev, Pandev to Milito, Milito to goal. 2 passes including 3 new players up front. Result: goal. They work like a well oiled machine. 7.5

Eto’o: Samuel is still a little rusty but he still scares the hell out of defenders. He needs to get back into the swing of things and take more shots. 6.5 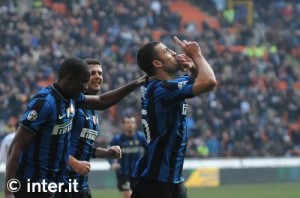 This was an all around good game from everyone. Those players that weren’t just adequate were very good to phenomenal.

Watching the front line players move constantly and support each other was simply incredible. Pandev started out a little withdrawn but then he, Milito and Eto’o started taking turns swapping positions, moving out wide and confusing the Cagliari defence. It was great to watch.

A negative of this game has got to be our penchant for launching the ball, a la EPL style, bypassing the midfield and expecting our little, shrimpy forwards to win the areal battle. They might gain position and give effort to put themselves in position in front of goal for a cross, but they ain’t gonna win that big boom from way down the field.

One day we’ll figure out how to keep it on the ground.

On the Primavera front, for those who didn’t see my earlier comment, Inter Jr. crashed out of the Viareggio Tournament to Atalanta on penalties. The match report read that we attacked but couldn’t put it away – even after hitting the post. After 90 at 0-0, Atalanta hit all of their penalties; we didn’t, missing one from defender Donati, who you might know remember from the Livorno Coppa game. It’s a shame that the group did so well during the group stage only to be slightly edged out of the tournament.

I am not that worried though. Word is through the few outlets that mention anything about youth teams is that Stevanovic is a revelation and if he wasn’t so busy with the senior squad, Rene would be there too.

Tomorrow we have the Parma make-up game that, since we are not Milan and apparently don’t have their connections, we are making up this game from late January BEFORE Milan make up the missed game with Fiorentina that was from December. Ours will be the only game that will be playing tomorrow. Why Milan – Fiorentina can’t also play tomorrow I have no idea. This isn’t quite true. I do have some idea. 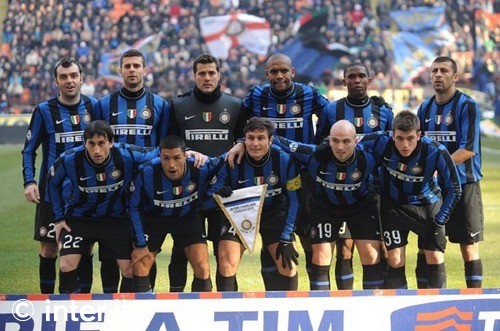