Share All sharing options for: FIGC 3 - Inter 1: Third Game is the Charm 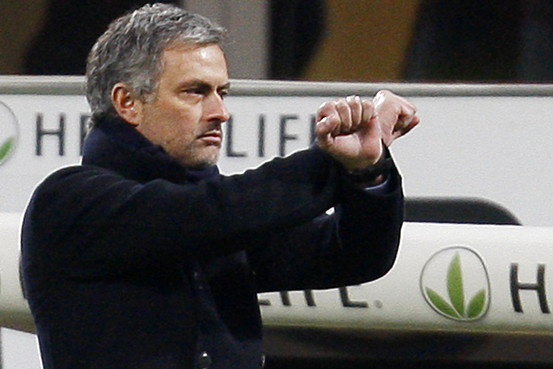 Well, here we are.

We should all have known that this day was coming. There were enough clues certainly.

And make no mistake, we deserved to lose. We did just barely enough to have a draw up to the 80th minute. After that we did everything that we could to lose the game in an inglorious a fashion as possible.

We did have an Inter Player of the Game on Friday. I hope that he’ll have a good game again on Tuesday… or as the Roma supporters probably call it, last Wednesday. 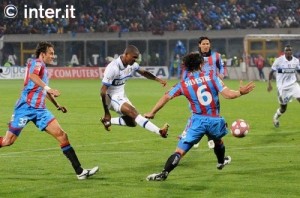 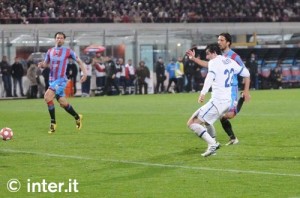 So instead I have decided to go in a different route for the stats section. Once again there has been some chatter about the “favors” that Inter have received in past seasons and that we shouldn’t complain about the “favors” other teams have been getting this season. Specifically, it was said, from a Milan supporter, that Inter received “tonz” of penalties last season.

So I counted out the penalties that we received from the refs last season. Be aware that “tonz” will henceforth mean 4.

I also counted Milan’s penalty total. If “tonz” equals 4, we will have to make up a new word to describe the number 12, which would be the number of penalties that Milan were offered last season.

It’s possible that this person meant the season before last, in which case the word “tonz” would have to mean the number 10. Considering all the hubbub that that goes on around here regarding the 07-08 season and Inter’s supposed ref favors for that season (look in the comments here for an example) one would think that Inter had the most penalties given to them that season. You would be wrong. Milan had 11 penalties given to them – it only seems like less because they only scored on 8 of them.

So considering the way we lost the Juventus game that season when we were in a title fight, the number of red cards we got (we set a record that we might break this season) and the number of goals that were taken out of the net to our disadvantage… it gets pretty amusing to read. Just be aware of the truth when you do.

PS. Milan are on pace to equal double digit penalties again for the 3rd year in a row. They averaged double digits per year for the previous three seasons, fyi.

Cesar: Did well to protect the goal for the single serious attempt in the first half and left high and dry for the 3 that got in. Then again, he stop them either. 6.0

Materazzi: I can’t believe that a professional made the mistake that Marco made on the last goal when he overran Lucio getting beat instead of covering the back post like he’s supposed to. 5.0 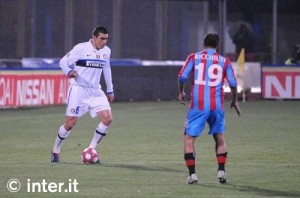 Lucio: It’s hard to blame Lucio for having a bad game when he has played so well lately. But he had a bad game, make no mistake. 6.0

Zanetti: I will never criticize Javier. But even he could have done better on Friday. 5.5

Stankovic: I think that the sub of Quaresma for Mariga was the wrong one. I think that Quaresma should have come in for Deki who was largely invisible. 4.5

Cambiasso: Considering the rest of the team, he was very decent. Considering how good he should be, he was a little less than decent. 5.5 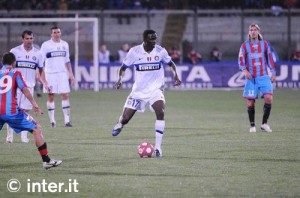 Sneijder: I thought that Wes was okay, nothing great but not as good as he has been. 5.5

Milito: He scored that goal but he really didn’t create it. I’m happy that he didn’t flub it, mind you, but I didn’t think a whole lot of his performance. 5.0

Eto’o: Samuel was running, he was taking shots and he made a wonderful pass after drawing the entire defence to him. It was a sacrifice and I appreciate it. 6.5

Quaresma: I made Ricky a player of the game last game as a bit of a joke. But the reality of the situation is that comparatively speaking, he played very well. If only he could do that for several games in a row instead of minutes. 6.0

Muntari: My feeling for Muntari is that the less said the better. 1.0

Pandev: Goran came on the field for the invisible Deki and preceded to be as invisible… but he did run more. 5.0 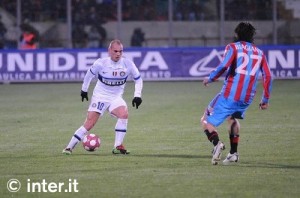 There isn’t a whole lot to analyze here. We weren’t focused for this game and Catania basically played the feared 10-0 formation. We don’t have the form to beat 11 men in a half and beat back a counter attack while on the all out attack.

Why we are so out of sync and form isn’t hard to understand. Our form has been poor starting from the second tie of the derby, when suspending our players became fashionable. Being suspended is a lot like being injured in that players lose rhythm and understanding with each other in game speed and situations.

But I am still at a loss to explain Muntari. He was always a loose cannon, but last season he seemed to funnel that emotion into his job on the field and became an almost tireless worker who had an incredible 5 game stretch for us. He completely flipped out on Friday. I don’t have any idea what Mourinho will do with him but I see it going 2 ways. Either they will seek other employment for him, or Mourinho will make him see that he’s an integral part of the team, gain his devotion to his project and rehabilitate him back into the team. If I had a guess, I would pick option A. In Italy there is no end of defensive minded midfielders to replace him with for much less.

By the way, on a completely unrelated note, did anyone notice how well Galloppa played today? I know I am crazy, right? A left sided midfielder who is emotionally stable, can make a nice pass, is willing to run and play defence. We don't need a player like that, right?

If this was nervousness for Tuesday, I hope that we got it out of our system.

By the way, I hope that I don’t see any Scudetto talk in the comments. We didn’t earn it after Friday and Milan is getting much more – and I am talking Mount Everest levels here - love than we are, currently. It’s just a shame that we can’t play them again to show exactly how much they deserve their league success. 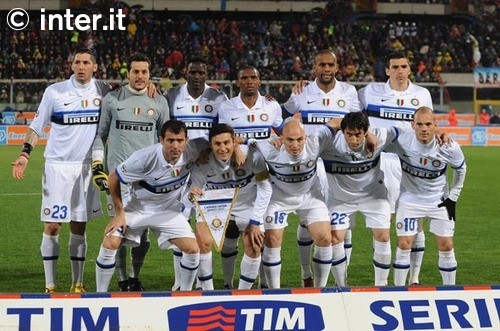