So last week things didn't go so well for us on the island. Saturday is our chance to redeem ourselves in the Serie A after last Friday's horror show. Sure, we may have totally KICKED SOME CHELSEA ASS this week already, but right now that means nothing. Of course, now that we have all seen what this team is capable of, we will be expecting a slightly better performance than what we have been seeing the Serie A recently (coughGenoa coughCatania). Palermo, though, will certainly not sit back and let us win. They are fighting tooth and nail for a European berth and with their talented roster I think they just may do it. With three less points that is...

What: Palermo v Inter
Where: Lovely Palermo, Stadio Renzo Barbera
When: Saturday, March 20, 8:45pm local time (12:45pm pacific, 3:45pm eastern; Europe has not changed their clocks yet)
How to Watch: Live on Fox Soccer channel and (ok, I guess I was wrong, but ESPN does show the little ESPN360 logo after the game. They lie). If that doesn't work, find a stream: MyP2P, Rojadirecta, Ustream, and ATDHE.net.

Inter does not have the best of records against Palermo. Of our 22 meetings in the Serie A in Palermo, Inter have only won 8. We have drawn an additional 10 and lost 4. In our last five meetings in Palermo we are W-D-W-L-W so that is a little better. Last season, this tie was the Ibra show. The team was a bit stinky in the first half, but woke up for the second with Ibra getting two goals (notice, though, how I refrained from starting the post with his picture. You're welcome). Here are the highlights:

For a look at this game from a pink point of view, I suggest you take a trip to the Palermo board. LorenzoRosanero does a great job over there. Given that, this will be short and simple.

Delio Rossi has caled up 20 players:

Palermo have had a very good season so far. What's more, they have had a pretty good last couple months. Sirigu has been a revelation and Cassani has really come into his own (although I still say he looks like John Cusack). It turns out Kjaer is not the fluffy little bunny I once thought he was, and Miccoli is showing everyone he still has it (although that chipped eyebrow is tragically stupid). Basically, they have lotsa talent all over the place. Oh, and did I forget to mention, they are unbeaten at home. Yep, 10 wins, 4 draws, and zero losses. 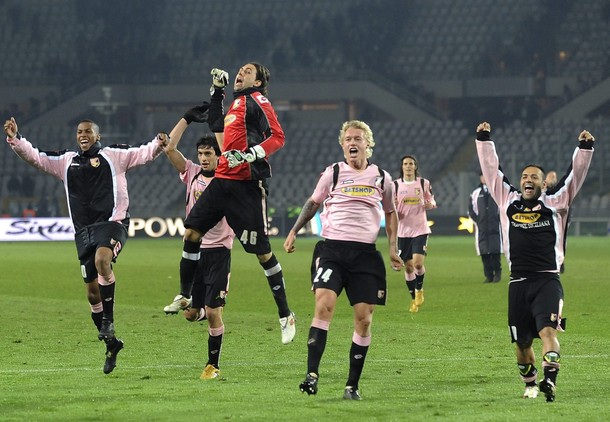 Here they are, joyous after beating Juventus.

And that looks like a formation that could wreak some havoc. Great. Just what we need to get on our Serie A feet. Especially as everyone is exhausted after our CL game. Welp, I guess if we are going win this league we will have to step up, tired or not. 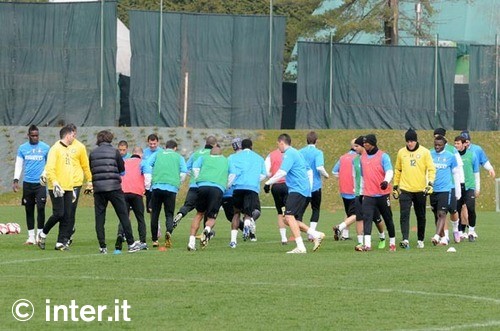 Everyone all together for the training - look at all the pretty colors!

Alrighty. So Mourinho still isn't talking to the press. We still have call-ups, though:

Chivu is on the mend but not quite ready to take the field. He is back to full training and hopefully will at least be on the bench for the Roma game. I guess Krhin is injured. Muntari is suspended (maybe he can get his stuff together during his little rest), while Balotelli is still benched (I guess he left training in a bit of a snit the other day). Still, Moratti is standing by Mou's decision to bench the kid, saying:

"We have already said that Mario is a very strong and talented player who is very useful for our future. I think the situation of recent days is a temporary situation, and nothing more. There is no project to sell him."

Alrighty then. Santon is healthy again and I wonder if we will finally see him back on the pitch. I would try to do a line-up here, but really, who knows? Will Mou go back to the 4-3-1-2? Or will he try the 4-2-3-1 of Chelsea fame? I have no earthly clue. 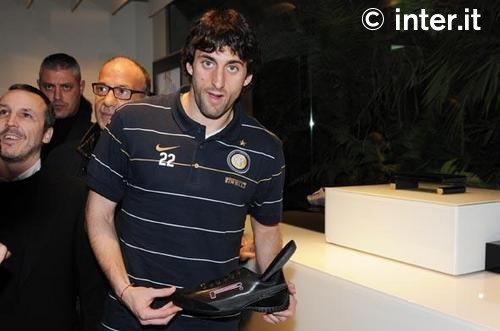 Hmmm, that face does not say "buy these shoes!" to me.

Milito had an interesting evening in Palermo. He attended the presentation of a new sneaker - which is strange because the the shoe is a special Sicily addition and is pink and black. You would think they would get a Palermo player instead.

Eto'o had his Bently GT 63 stolen from a Sheratan in Milan. He loaned it to Arnautovic and on Thursday it was reported stolen. Wow, the team has some bad luck with cars. First JC and his lambo and now this. But still, what kind of idiot loans his ridiculously expensive car (seriously, you could buy a whole house with the money Eto'o spent on this car) to a 20-year old kid? Yikes.

So, a week or so ago I asked if any of you readers had English-language Inter blogs of your own. Saddly, I got only one response: upper90 writes in his own little corner of the net called American Interisti.

Currently there is a preview of the quarter final CL draw - something I forgot to do. It may not have turned out exactly as he thought it would, but it is a good read. Check it out - if nothing else than to support your fellow Inter fan.

If you have an Inter-related blog, drop me a line and I will plug it here on the Offside [johonnars (at) gmail (dot) com]. Share the love, I say! Plus, then I get to use my incredibly clever little title again (admit it, you love it).

Back to the Game

Ok, so Inter has not been doing so hot in the League these last few weeks. Sure, we have had our fair share of suspensions and the odd injury, but that is really no excuse. As Football Italia were so kind as to point out:

"The statistics do not speak too highly of Inter’s campaign. They are the leaders with the lowest overall tally since Serie A went back to 20 teams. With just 59 points they are well below the previous haul of 63 when Milan and Juventus were joint top at this stage in 2004-05. Inter are a good seven points behind on their total at this time last season."

I think it is fair to say that March has not been our best month. And after such an emotional (and physically draining) midweek match, I wonder if Inter hasn't bitten off a bit more than we can chew. I know Moratti likes to throw around the idea that Inter are looking for the treble, but after Genoa and (shudder) Catania, that seems a bit far fetched. Frankly, I am in new territory here - I really want to win this scudetto, a lot, a whole lot , but I am sort of letting the Champions League creep into my heart as well. Not that I think we will win it, but I would like to make a good showing of ourselves (it was so much easier when I didn't give a rip). I wonder if our team really has the depth to do well on both fronts - if one wont have to give up one for the other. And as for the whole Coppa Italia thing, Fiorentina have now made this the priority for their season. As they now sit at 10th place, it may be their only ticket into Europe. They want it, and bad.

Still, as Delio Rossi said in his press conference:

“I don't expect Inter to be content just with their success on Tuesday night because they have champions who are used to winning and playing in certain games. If they don't manage to absorb the euphoria for this success, evidently they are not really champions."

I guess now we see just how badly the team wants our 18th Scudetto.

How about a little feel-good vid to get us in the mood for cheering:

And here is grandeMou's suggestion: