Inter v Livorno: Whatever Will Be, Will Be

Share All sharing options for: Inter v Livorno: Whatever Will Be, Will Be 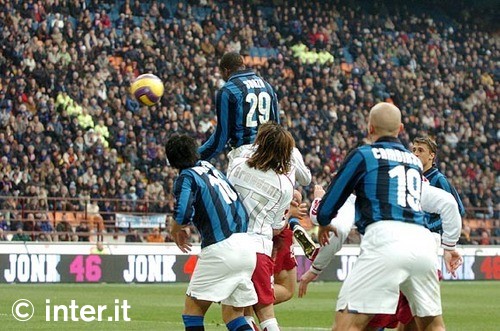 Or, in the words of the immortal Doris Day: Che Sarà Sarà

I am done making predictions. Everyone knows Inter's relative position on the table. Everyone knows we need to start winning. Everyone knows Inter is not performing up to snuff in the Serie A. As for Livorno, well, they are in some serious relegation difficulties and they haven't won a game since early January. Trouble doesn't begin to describe their position. A point or three would not save them outright, but every little bit helps. I would like to think this game will be the closest thing to a gimmie the Serie A can provide but I have learned never to take anything for granted. Che sarà sarà.

What: Inter v Livorno
Where: San Siro, Milan
When: Wednesday, March 24, 8:45pm local time (12:45pm pacific, 3:45pm eastern)
How to Watch: FSC is showing the game on delay at 3pm pacific, 6pm eastern. If you want to watch it live, it will be on RAI International or find a stream: MyP2P, Rojadirecta, Ustream, and ATDHE.net

To start, let me just point out that Inter has not lost a home game to Livorno since World War II. Of course, it had been 45 years since Catania had beaten Inter and we all know how that turned out. Inter and Livorno met a few months ago at the San Siro for a Coppa Italia game. That game definitely sported an unusual line-up, including two players who are no longer even with the team. Well, thanks to our lovely Dutch boy, we managed to come out on top (barely) with a 1-0. Our last Serie A meeting in Milan was back in February of 2008 and it was Suazo/Cambiasso show. Suazo for his two goals and Cuchu for just plain wonderfulness (or at least that is my recollection).

Highlights of that game are below (and I appologize for their low quality, but it was the best I could find):

Marco Stucazzo has valiantly resurrected the Livorno board so go on over and check it out for the Livorno take on this game. I really dont have all that much to say about them because, frankly, I dont know who most of their players are and I have only seen a couple of their games (it must be almost impossible to follow the smaller clubs from outside of Italy). 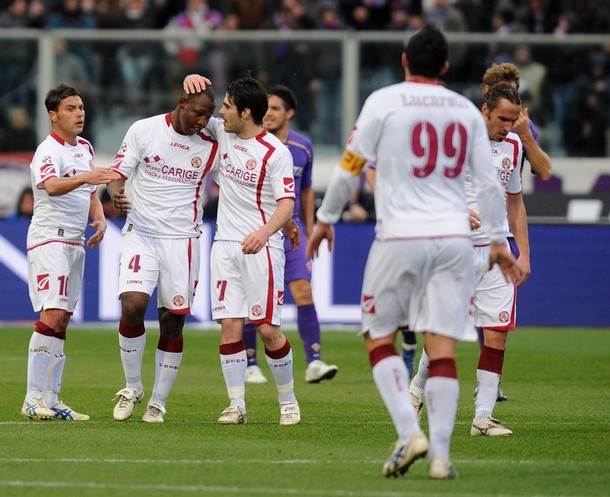 Hmm, Rivas seems to be doing pretty well at Livorno. Maybe there is hope for him yet.

Livorno is not doing so well. Right now, they are bottom of the table with 24 points. They have only won 2 games and scored 6 goals away from home. But that is not to say they cannot hit the back of the net when they want to: just last week Livorno Legend Lucarelli spectacularly scored a hat-trick against Roma. So ya, they know how to score.

I cant find a call-up list for them, but La Gazzetta thinks Cosimi will play a 3-4-1-2:

Moro is disqualified while Miglionico, Bernardini, Bergvold and Esposito are all injured (Yikes). You will see that our old friend Rivas is thought to be playing tomorrow. Inter still own his card and he is definitely getting that playing time he so desperately needed - he has even managed to score two goals (!). I guess we will see how he is progressing tomorrow. 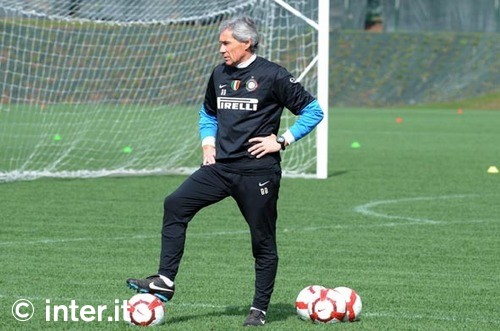 Baresi will show you kids how it is done!

We have 20 players called up tomorrow (which is everyone except the injured, suspended, and Mario):

Krhin, Santon, and Sneijder are injured, although in Santon's case, it may be precautionary. For the first time since early January, Chivu is not injured and he may actually make the bench. Stankovic is suspended for yellow card accumulation. Balotelli is, according to Moratti, not in form. 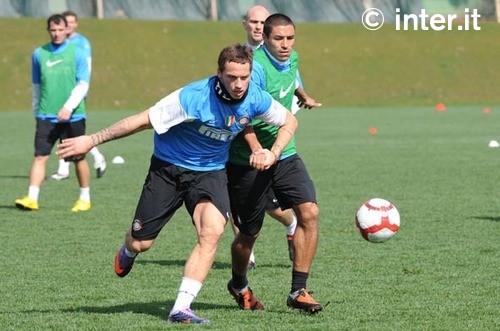 So, what are the odds either of these guys will see the pitch tomorrow?

Add our injuries/suspensions to that the fact that we have a title contention game this weekend, then an all-important Champions League game means Mou may want to try a little rotation. Who can say (well, Mou could but he wont have any press conferences. Doesn't he know how hard he is making this blog to write)? You will notice the inclusion of Mattai Destro (Mr. Right to you and me) on the call-up list. He has been tearing things up for the youth squad: according to La Gazzetta he has 35 goals over two seasons with the Primavera squad and 20 goals from 26 games with the youth national team. It is also a small dig at Mario - there are plenty of promising young fish in the sea so dont get too big for your britches! (I just love mixed metaphors)

Anyway, La Gazzetta has come up with a totally crazy lineup prediction:

Well, I guess that is certainly possible.

Ok, once and for all, here is the now infamous Golden Tapir Incident:

For me, this is not an issue. It was a joke played on him by a tv show well known for playing embarrassing jokes on celebrities. Also, for the record, Ricci (the guy with the tapir) tries to get Balotelli to put the shirt on many times during the "presentation" but he refuses. Ricci asks Balotelli a number of times why Mourinho hasn't called him up and Balo says he doesnt know, and you should talk to Mourinho. Another time, Balo says that maybe the others are stronger. Basically, he says what he is supposed to. The only slightly controversial thing Mario says is when Ricci asks him if Mou beat Chelsea. Mario says "Of course not, the team won." Which is entirely correct. You will notice that Mario does not actually put on the shirt until he thinks he is off camera. Then, when Ricci points out that he is still filming, look at poor Mario's striken face. So, enough of that. It was a mean joke meant to catch Mario out. We all had a giggle but lets move on (for you vultures, he is under contract to Inter until 2013 with a 70 million euro buyout clause in this contract).

And now for our relatively new segment:

Our good friend Kirby has his very own little corner of the world wide web on ESPN's site no less (he is quite fancy). Right now he has a Chelsea-Inter review up, but I am sure he will have some new content up soon (hint hint). Anyway, check out his blog - it just looks so darn professional with that ESPN Soccernet logo on it.

As I said, if you have an blog or webpage about Inter that you run, send me some mail or post it in the comments and I will give you a plug here. johonnars [at] gmail [dot] com.

BACK TO THE GAME

Well, I guess in closing, all I really have to say is that I will be very disappointed if we dont pull a good result out of this game. I know everyone is tired and we have some injury scares, but if we cant beat a bottom half team at the San Siro with a few second string players in the line-up, we are surely doomed. Everyone keeps extolling the mythic Inter depth. Well, now it is time to start showing that depth and win a freaking game, for cripes sake. If Muntari really does play he better take some deep cleansing breaths or do some pre-game tai chi or something, because another showing like that one against Catania will see Mou ship him out so fast his little head will spin.

Right now, though, we need him to be good. We need everyone to be good.

This ought to get everyone in the mood to cheer: