Share All sharing options for: Inter 3 – Livorno 0: The Magic Number is 21 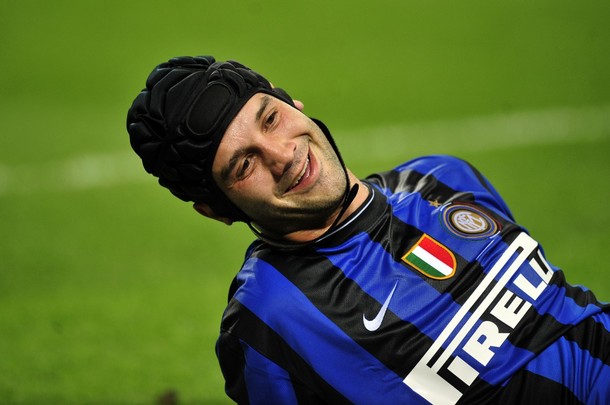 There isn’t much to say about this one really. I was watching it on Rai – International and it cut away from most of the second half action to tune in other games that were closer and more interesting. The television station was just savvy to what we already knew. This one was over by halftime. Maicon’s 3rd goal was just sauce for the goose.

The real story about this game had little to do with the game itself and more to do with the matchday. We started the day one point ahead of Milan after they failed to take the lead last weekend. After the matchday was over we were 4 points ahead of both Milan and Roma – who maintained their distance with a win. This is now our season, shrunk down to a table of three teams and a schedule of 8 games. How these teams shake out the remaining games determines who gets to wear three colors next season and call themselves Champions of Italy.

My Inter player of the game… was there any doubt? 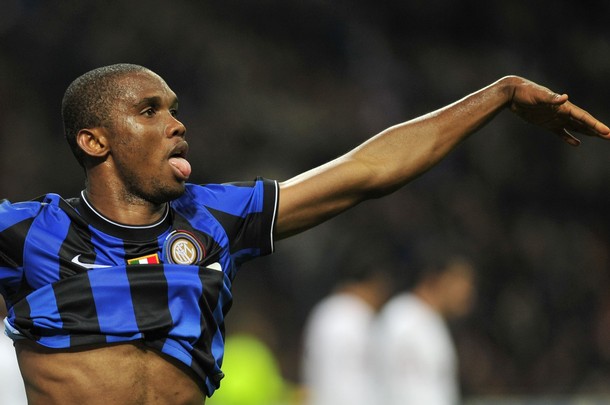 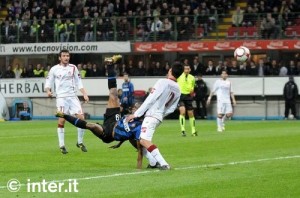 Cesar: Before the first goal there were two sketchy moments that Cesar handled with class and athleticism – which happen to be his calling card. 7.0

Maicon: If it me or does Maicon have to sky a ball into row z before he can properly get into a match? Well, I thought he did well to get into this one… but it was Livorno. 7.0

Cordoba: Cordoba put in some quality minutes to give Lucio a break and me a sense of weird nostalgia seeing Materazzi and him back there again. The two of them always give me at least one heart attack, though. 6.5

Materazzi: Samuel, like Lucio, got some quality rest, thanks to Marco. It’s nice to see him back there playing, for some reason. I seriously wonder if this is his last season. 6.0

Chivu: How cool was it to see him walk out of the tunnel, helmet and all. Plus, I think that he played very well considering his four month layoff, but then again, it’s Livorno so I am cautiously optimistic. 7.0

Zanetti: Javier was back in the midfield doing what he does best: solidifying a weak area of the team, whatever is necessary to get the job done and leading by example. 6.5

Cambiasso: There were one to two rough spots, but I didn’t think that Cuchu did too badly manning the center area by himself. I noticed that he dropped way back to cover for Marco and Ivan more than once. 6.5

Motta: Is it me, or does Motta look like he’s finally getting used to playing for Inter? He passed the ball really well and was a support for the forwards. I think we have finally found his position as a regista. 7.0

Quaresma: I have said it before, these are the games that RQ is going to have to step up and play well in if he’s going to stay on the team. He stepped up. He’ll need to do it again a couple of times before we sleep. 6.5

Pandev: The whole game I am thinking that Pandev isn’t having a good game, he missed a good chance, his passing isn’t working – and then he lays out a beauty of a chip for Eto’o and I think, that’s the difference between the consistent “water carriers” that the team was made of last season and the quality that we play with now. When a “water carrier” has a bad game, it’s bad. When a technical player has a bad game, he can still provide a single piece of quality to make the rest of the shit performance worth it. 6.5 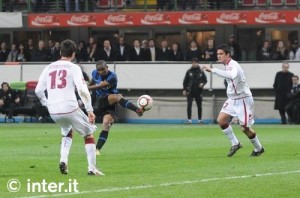 Eto’o: Eto’o had about 4 or 5 chances in this game and he put 2 in. I don’t think that you can ask for much more than that. He’s just such a joy to watch with a rare combination of power, skill, grace and an unearthly determination to score. He scares a defence witless and he is so willing to pass to give someone else a chance. He’s a rare player and I am happy to have a chance to see it. 8.5

The success in this game isn’t the 3 points or the distance that we were able to put on Milan, although those things are very nice, indeed. The success of this game was the player rotation that we able to enact at the same time that we are in a midfield crisis.

Stankovic was suspended, Muntari needs to find his happy place, Mariga is too young and too new to be trusted with much, Motta is too injury prone to get real understanding with everyone else and Wesley was resting an injury. Over this whole season, our most reliable midfielder… is a converted fullback. He’s a hell of a converted fullback, but the fact remains. Go figure.

But we needed to rotate. A reasonably big match with Roma is on the horizon and a Champions League game with Moscow is just past said horizon. We have several players, Lucio for example, who needed a rest from doing an awful lot of the dirty work of the past horrific month. Lat season, attempts to rotate were laughably bad, whereas this season we had been moderately successful in sporadic endeavors. But in April our schedule is chocked to the gills with league games, Champions League games and Coppa games. Here’s what I mean, between April 1st and April 17th we have 5 games. We need everyone we got to get on the field and make sure that we get our 21 points. 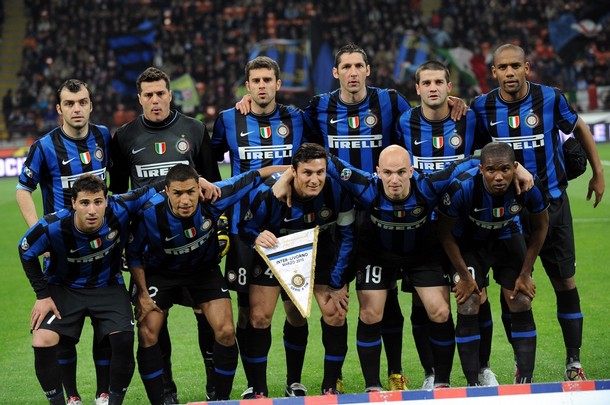