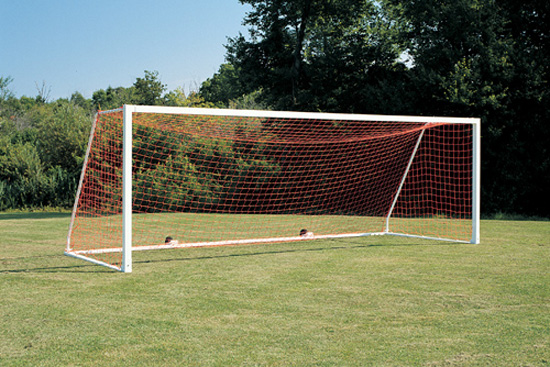 Roma\'s best defender on the day?

The 24 Hour Rule that I mentioned not too long ago is a handy thing. It works when you win to keep your feet on the ground and realize that a win is just 3 points no matter how good one looks when doing it. It also works when you lose. It was just one game no matter how frustrating it is to lose that way. This is especially true considering the fact that we are the only team in Italy still fighting for honors (read: Money) in Europe and also still fighting for honors (read: a trophy, any trophy) in much smaller in stature and prestige domestic tournament in addition to continuing league play.

In other words, we still have a ways to go; it’s not really worth getting too upset about this one. Especially considering that this isn’t a terrible loss. Roma, the 2nd place team, is expected to be a tough away game and points are expected to be hard to come by there. The table doesn’t really change because of it – we still are one point in front of someone – it just makes next weekend’s game more important considering who we play and their relative spot on the table.

My Inter Player of the Game: 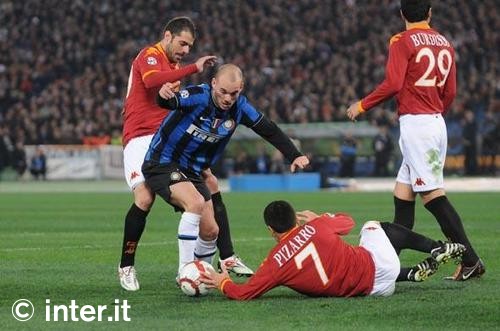 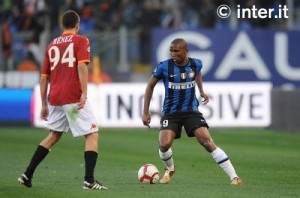 The thing that should jump out at you is the number of yellow cards. Doesn’t it strike you funny that when we played Chelsea we are penalized with fewer cautions (6) over 2 games than one game with Roma? Did anyone come away from this game thinking that this was *more* physical than either of those two games? Did anyone come away thinking that Roma were that much cleaner in the tackle to have 3 times less cautions? It's even more galling considering that Menez, Perotta and Toni could probably have been sent off just for diving. But there is a lesson to be learned here: the players on the field are clued in, despite what all the old men say, otherwise there wouldn't be all the rolling around every time we show up.

Remember how I said that Scudetto talk shouldn’t be uttered/written on this Offside page? We don’t get the love.

Next game, we will have 4 members of the team missing against Bologna including that dirtiest of dirty players Javier Zanetti who will miss his first game in something ridiculous like 3 or 4 years worth of games. Lucio, Maicon and Eto'o will all miss next game as well, which should make the fullback position an interesting one for a game (Cordoba and Chivu? Is Santon ready? Who plays on the right?). 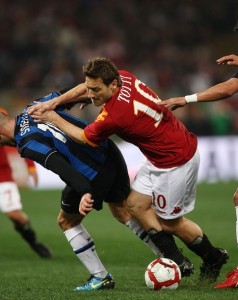 The ratings are taking a break this game as Real Life is beating me up right now and I just don’t have the time to go over the game with as fine a tooth comb as I would want in order to do them. I barely got a chance to see the game once before bed last night and I am really trying to make sure that I get this in before the next game on Wednesday.

Anyhoo I once said on this blog that I was more afraid of Inter screwing up this championship than I was that Roma or Milan were going to out play the team and this last game is a perfect example of what I meant.

Take the first goal for example. Burdisso heads it right to Cesar who puts two hands on the ball… and then drops it right to De Rossi’s foot. Inter screwed up what should have been an easy save and Roma took advantage of the situation. It’s a perfect metaphor for the season. The second Roma goal is another metaphor, or maybe it’s a cliché. One player, I think it was Taddei, takes the most embarrassing shot that a player can take – one that looks like it’s more apt to go out at the sideline than to go near the goal - but it goes right to his open teammate’s foot, proving the old adage about how much better it its to be lucky than good.

When the ball bounces your way, it bounces your way and there’s nothing that can be done about it. Inversely, when the ball refuses to bounce your way… well, you get it. Roma’s defence proves that it really hasn’t changed too much from previous years. The woodwork was called into action 3 times, by my count, to save what has always been a suspect defence behind an offensive team. Inter’s actual goal had an offside in the build-up at some point but it took the replay for me to catch it as there were a lot of people in the area. It’s a shame that it had to happen but I am not freaking out about it. Inter had plenty scored on them like that over the years and we even had some this season, too. Unfortunately, they all counted. Besides, Inter score perfectly legal goals against this team all the time and their supporters claim that they were all offsides anyway; we might as well give them something legitimate to bitch about.

Anyway, this game is done and dusted and it’s time to move on. Or at least, go back to basics coughcoughCesarcoughcough. I have to say, he had the good grace to admit that the game’s loss of points was his fault. Milito showing his class and the general demeanor of the team – sans Mario for the moment – said that Cesar made a mistake that cost us, but then again, he [Milito] made one too when he hit the post. It was a nice gesture and a show of solidarity.

So on that note, we take on CSKA Moscow on Wednesday at home, which will make this the second Roman Abramovich funded team that we will meet in a single competition – defying my ideas of wealth and the spirit of a host of FIFA and UEFA guidelines at the same time. Howard Webb, who also has a connection to Roman Abramovich through the BPL, will be the referee. I wonder if Mourinho still feels like sticking it to him. Based on past experience, with the loss in the championship and the Roman factor, we should be up for this one. 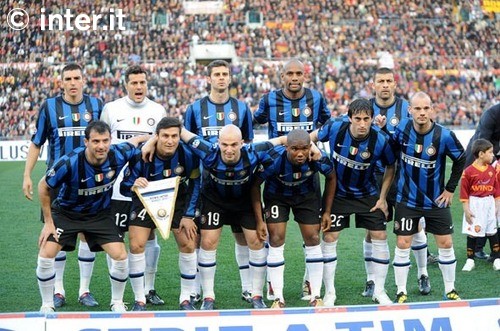