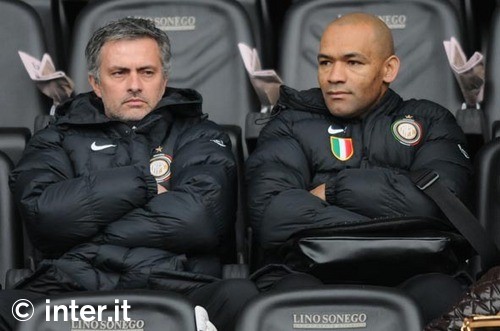 Somewhere there is an EPL supporter who is scouring his FM 2010 team database trying to figure out who FIGC is...

Take a quick look at the picture above. Do you see anything missing?

Game one in our Know Your Place series of games coming up ended, many are disappointed I am sure, successfully.

I always get nervous when we play Udinese. Like Atalanta, it’s one of Those Teams for us. You know, the ones that always cause us troubles no matter how we are doing in any particular season.

Compounded to being one of Those Teams, we were also without 4 big contributors and our Manager. When Managers were banned from the touchline in olden times, they merely gave their flunky directions on a 2 way radio. Nowadays our banned man managers just scream into a mobile phone. I don’t think that Mourinho even said a word into his phone. I think I saw him texting, checking his email and playing Bejeweled.

But as in the Sampdoria game, there just didn’t look like there was ever going to be a time when we were going to lose. We just kept pouring forward into the attack during the first half building a lead.

Anyway, there is really only one choice for My Inter Player of the Game. He’s the one that should be going to Africa this summer, but won’t be. 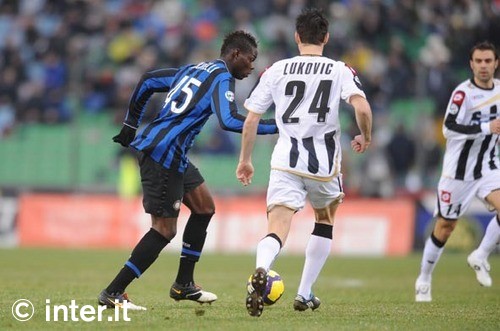 The stats are all over this game for a couple reasons. First of all, we didn’t have a game plan that was consistent for the entire game. As our fortunes went up and down so too did the tactics fluctuate. We were in 100% shell game for the last 15 minutes or so. We went down early and then we went into turbo for the rest of the half. The second half was a much more cautious game for us as we just didn’t have to go forward.

Cesar: I am not going to blame Cesar for either of the goals. He could do nothing when the penalty was taken and 1v1 isn’t his game. Not bad. Not great. 6.0

Maicon: When Maicon is given the green light to attack, it’s almost like he’s another person. He scored a wonderful goal. He assisted another. Defense wasn’t terrible either. 6.5

Lucio: Lucio continues his absolutely excellent form from the Champions League. At times, it seems like he was defending on his own. 7.0

Thiago Motta: Forgettable game from the midfielder doing defensive duty. I can’t think of too many positive things he did this night. 5.0

Zanetti: I am coming to the realization that Javier just can’t cut it as a fullback anymore. As a ball winning midfielder, sure. But going against speedy wingers might be asking too much of the nearly 40 year old. 6.0

Mariga: I thought that Mariga played well in his first start as a young 20something. I don’t think that he set the world on fire, but being a steady contributor at that young an age is great. I hope that he can develop. 6.5

Deki: Two summers ago I was all for selling Deki. Then, Deki really made me into a fan of his last season. He’s slowly losing me again. He needs to step it up. 6.0

Mario: Unquestionably, in my mind, the Player of the match. Nobody influenced the match like he did. I don’t really care about the penalty at about the 50’ minute. 8.0

Milito: He pushed and pressured the entire first half and he was rewarded with a classy header while being marked right on the hip. Yowza. 7.0

Pandev: Made a nice pass to set up the 2nd goal, but other than that, nice effort. 6.5

* Mourinho got the tactics right on Sunday. If the FIGC is going to take defencemen and holding midfielders from us, there was nothing left to do other than attack.

* I said it above, but Mariga had a nice, solid game. He played in the confines of the system, he made a stiff tackle or two and he made easy passes. That’s ll we wanted from him this early.

* Speaking of Krhin, it’s a good sign that he came on for Sneijder last Sunday. Krhin has now seen action as the center midfielder and as the playmaker. If he comes around – and he’s got all the time in the world – he could be a vital part of the spine of our midfield.

* Food for thought – we have “given up” more penalty kicks since January than Milan has all season. We have “given up” the same number of penalty kicks since January than Roma and Juventus have had – separately - all season. You know, I don’t really see us as having a worse, or more accident prone, defence than any of those teams… right, Juan and Bonera?

* Odds on Maicon leaving this summer? As of right now, I am going to say that this would be one of those player transfers that will hurt me - unlike Ibra’s. Here’s a number: 40 million Euros. Is he worth it? No. But when has that ever mattered?

* March is a killer schedule. There are 6 games in 4ish weeks, one of those in London. We make it through this month in one piece and we might make some noise in the Scudetto race.

*I don’t get, but am amused by people freaking out every time Balotelli says or does something. In Serie A, there have been and there are worse people than Mario Balotelli who has: never slapped a line judge, spit on someone, paraded around Milan telling people to put their trophies in their asses, told a referee to go fuck himself, intentionally broken someone else’s leg with a vicious tackle from behind or broken someone’s nose on purpose.

Any one of the above is worse than any 3 things that Mario has done. I think that there is a lot of jealousy by supporters of other teams when it comes to Mario. 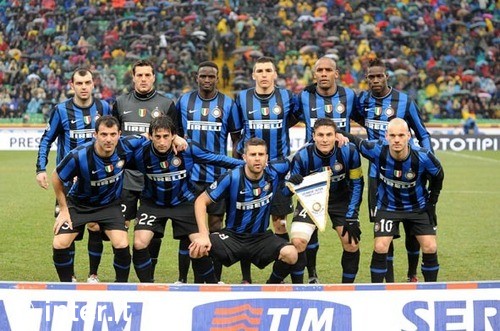