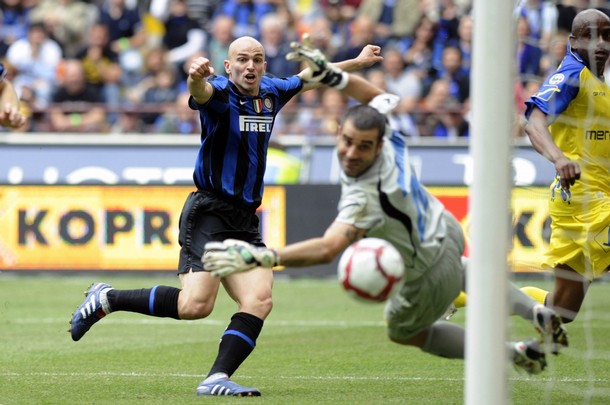 There are two games left.

That’s it. Just two and this marathon season, over 50 games, will be over and we can all take a rest from all the stress of need to win games.

For quite some time on Sunday, we only had one game to win for the rest of the season. But it wasn’t to be. So, we go into next Sunday with 2 must win situations.

We overcame Chievo 4-3 in a game in which the scoreline really flattered the visitors since they were on their heels for most of the game. Unfortunately for about 10 minutes or so our players on the field were watching the scoreboard to see what was going on in another game.

They really shouldn’t do that. Once they realized that they still had to close out a still kicking Chievo, they totally pinched them off at the midfield line. And the celebration, if there is one, will have to wait another week.

My Inter Player of the Game 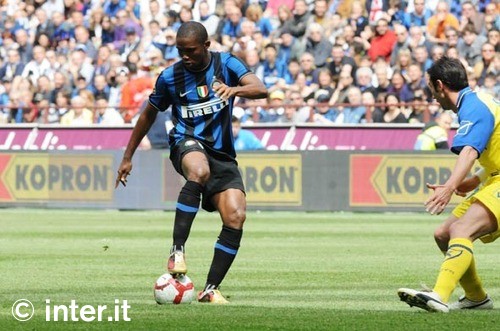 The pagelle is pretty worthless for this game. Basically each player has two scores: 1. when paying attention 2. when they were concerning themselves with another team’s business while still playing.

On Sunday, Mourinho really didn’t have Sneijder… or at least no one made a blatant attempt at taking him out in the first 5 minutes on this occasion… so we went to work with three real midfielders using Thiago Motta, Cambiasso and Stankovic. All three can cover and play defence. All three can bring the ball up the field. All three can make intelligent passes. In other words, they were perfect for controlling the midfield in all three segments for this game, when they were on top of things. We were able to pass into some chances on goal and we were able to contain the counter attack, for the most part until we started to get curious about things in Rome.

Personally, Thiago Motta is growing on me quite a bit. I am really getting impressed with his ability to pass the ball and make sure that everyone gets a touch. It’s so unselfish – no one is upset about giving up the ball because everyone knows that it’s going to come back at some point. He also made up for his mistake very nicely. The reaction of the other players was awesome.

Cambiasso did his usually stellar work and his goal was typical for him – the result of his hard work and ceaseless running. I think that he and Motta are forming an interesting pairing. Motta doesn’t run nearly as much as Cambiasso, but makes the ball do a lot more work – it’s a kind of yin/yang thing. They both play defence well, but once they get the ball there’s a different dynamic and I think that the contrasting styles are useful.

On the other hand, I have been disheartened by what I have seen from Deki for large parts of this season, this game as well. I never thought much of him as a defender although he does the job, but I can see that he’s slowed down quite a bit. He used to, once upon a time, be famous for making these kamikaze diagonal runs into the box and then thundering a shot at full power. But he doesn’t make those runs nearly as much as he used to, maybe because he has more defensive duties or he plays much farther back? Anyway, as much a fan as he made me last season, I am getting the idea that a squad spot is nigh for Deki.

The attack I thought looked as flowing and creative as they did towards the beginning of the season. Eto’o and Milito made some simply sublime passes to each other, including the lead up to that beautiful chip. It was such a pretty goal. But I was actually more impressed by the continual running up front. Barring the blackout, I don’t think that I saw too much walking up front. Oh there was some when the ball was well away, that doesn’t bother me. But generally, when there is a defensive stop, these guys play so deep in our own end sometimes that they often have a 70 or 80 meter sprint every attack. After coming all that way while working the ball past defenders and running laterally at times and making runs that don’t get you the ball… by the time all that has happened, I don’t blame the occasional miss. Those guys have to be beat.

And Eto'o worked so hard to get a goal. But the man's professionalism dictated that he come back to help on defence and that he make passes to set people up when possible. It made me glad to see him celebrate other people's goals even when he has to be disappointed about having to play wide and farther out from goal.

By the way, I would like to make a special mention of Mario, who played a nice game within the game plan and was rewarded with a great opportunity for a goal that he placed perfectly and calmly. I don’t know if this performance was a result of Mario getting serious about working or if this is a testament to how poorly Totti executed his sneak attack on Wednesday, because Mario looked fine for a guy who was kicked by someone with a zillion years experience of placing his shot. Maybe Totti was tired by the time he caught up to Mario, as I don’t think Totti has run that hard in 5 or 6 years.

Anyway, the fans definitely noticed his good work and he was universally applauded off the field by them. His teammates made sure to congratulate him on a good game as well. If the little fucker only could have done that in the months of February, March and April we would all be doing backflips.

This brings me to the defence. Rock hard and steady for about 70 minutes they decided to take a break and watch the game with the fans, instead of, you know, playing in the stupid thing. The defence on Sunday was Zanetti, Samuel, Marco and Maicon. If I were doing a pagelle, 2 of these 4 nitwits would get a laurel and hardy handshake to go with their 7.5s. One would get an okay 6ish and the other would get a 3 to go with his tattoos. Maicon and Zanetti were magnificent when they were pressuring Chievo and pressing forward not giving them a chance to breathe. Samuel was his usual self and Marco was driving me nuts.

Marco, in his best years, had a very narrow skill set and as long as he’s in that zone, we are fine. Marco can win a header in the area like very few players can, it’s a knack he has – in fact he has always reminded me of Dennis Rodman in basketball, just a knack for going up and competing for the ball and winning it. If the play is rather static and the ball is being passed around, Marco is okay there, too. He has no problem putting his body on the line to deflect a shot or getting in someone’s way to challenge the ball. He has incredible desire and a chip on his shoulder that people bump into from a mile out.

His deficiencies have always been his relative lack of athleticism and his incredibly poor awareness of where all the players are on the field. So you can outrun him, out maneuver him and you can sneak someone past him. He also is a little hotheaded – his lack of calm can get him into some troubles.

The problem with athletes getting older is that the things that you did well, you aren’t do that well anymore and you are also not doing them well as often as you did before, either. Also, the things that you didn’t do well before… now you REALLY are hopeless at those things. I love Marco, but his time is over. He can’t compete at this level anymore, despite the fact that he has had some good games this season. They really are too few and frankly he wasn’t incredibly reliable at the best of times, but now he’s very erratic and I am not talking about his personality, I am talking about his performance on the field. I just can’t see him coming back as a player next season.

Cesar’s performance during the second half of this game was so poor that I am actually at a loss of words. I know why he was poor… he was bored out of his mind. I get that and I understand it, but he’s a professional and incredibly talented. He’s got to do better than that. He just looked out of sorts and not prepared. Inexcusable.

I am happy for the win but the work isn't done. The guys are going to get 2 days off and then it's back to work on Wednesday. How they react to this "extended" time off will be interesting. The last time they had a whole week off was in March, I think. The team has done a marvelous job of compartmentalizing and taking one game at a time. Can it last? 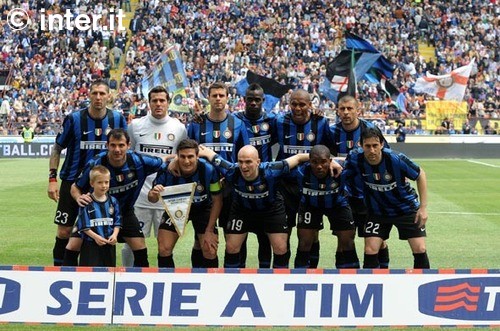