Share All sharing options for: Roma Jr 0 – Inter 1: There Can Be Only One! 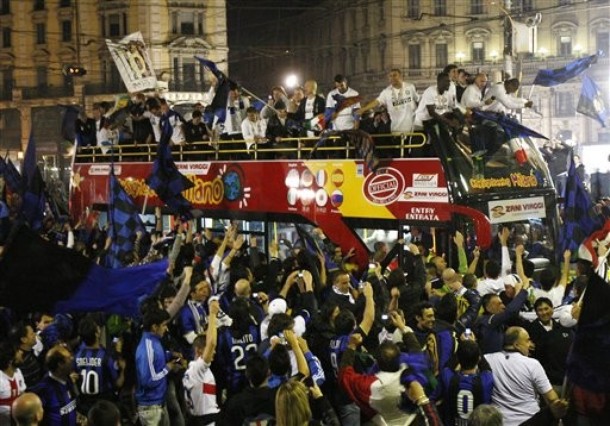 Too Much Magic Bus...

That’s right. There is only one champion in Italy.

No word yet from Ambrosini where we should stick this one, but surely we are running out of orifices by now?

Although it seems some fans slipped a suggestion on what Totti can stick where on the mandatory, celebratory tour bus.

The League Champion and the Coppa Champion is the same team for the first time since 2005-2006 when we were the holders of both due to the special circumstances of Calciopoli. Previous to that, my research shows that it was Lazio who last won the double on the field in 1999-2000.

At no other time have we ever been the holders of both Italian titles.

My Inter Player of the Game… it might surprise you: 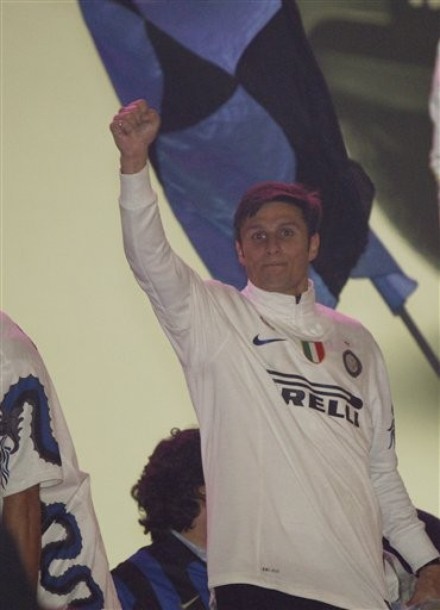 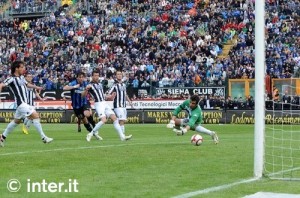 Cesar: Julio earned his pay packet on 2 saves in this game, one that he almost muffed a la the Roma game. But he didn’t. His distribution was mostly excellent. I thought that he only made one serious error late in the game, when he gave up on a cross/shot that ended up a lot closer to scoring then he thought. This was a mostly good game by a player who had to keep his concentration high due to lengthy inactivity. 6.5

Maicon: I thought Maicon was very good defensively – he made several neat tackles – and he made several simply awesome moves in the offensive end, one of which was so close to a score that I was left with my mouth open at the end. 7.5

Materazzi: Despite the fact that Marco seemed like he was playing on the opposite side of the defence then he usually does, I thought that he played a much more reserved and savvy game then he usually does. I was upset at some of his overlong passes that lost us possession, but he did his job and dominated in the air. 6.0

Samuel: He almost did it. He almost saved our ass with an amazing header from a corner. Twice. He’s a rock on the back line. He’s expanded his game to become a lethal force on corners. He covered for the few times that Marco was beat or caught too far forward. He also put his body on the line several time to block shots. 7.0

Zanetti: He played 2 positions phenomenally this game: fullback and midfield. When we needed the score, he put the team on his shoulders and dragged them forward. Twice he made absolutely astounding runs forward and he defended like an animal. In a weird way, Maradonna only served to focus and drive Zanetti into making sure that he gains his honors with his club team. For Zanetti, there is no chance at World Cup glory… it happens here now, or he will get nothing. Zanetti has clearly chosen to give his all right now and will his teammates forward with him. 9.5

Cambiasso: I thought that Cambiasso was really up for this game. He was running and scrambling around like a terrier looking for a rat. I stopped counting the number of interceptions he made because there just wasn’t any point. He had a reasonable good chance at goal that he flubbed, unfortunately. But the man was unstoppable, as if he was driven by the same motivation that Javier was. 7.0

Motta: Not for the first time, I was impressed by the way Motta and Cambiasso work together. Motta made sure that we kept possession, made sure that everyone had a touch of the ball and also contributed to the defence. He becoming a real metronome for the team, making sure that we patiently probe the opposition or getting our dangermen the ball in such a way that we can manufacture good chances at goal from inside the penalty area. I am really becoming a fan. 7.0

Eto’o: Eto’o was dangerous enough to cause the defence of Siena to spread out wide to double team him on the wing when he got the ball. He made some incredible moves that were unfortunate not to find the back of the net. He was unselfish and a real threat. I am hoping that next season Eto’o is acclimated enough to Serie A so that all these wonderful chances that he makes turn into goals. 6.5

Sneijder: I didn’t think that Sneijder had a particularly good game, but I didn’t think that his average game hurt us. His passing was good, his running was good, neither was very effective, I thought. He made some nice runs and passes with Milito – Wes is a good player after all, an average game from him is a good game for a lot of others – but there just didn’t seem to be the oomph that we got when he was subbed off. 6.5

Balotelli: Mario had a good game. He had a hell of a chance in the first half and he headed the ball into a pass that Milito almost turned into a nice score. When he subbed off he clapped the fans, slapped fives with his teammates and slapped fives with the coaches. Personal growth? Repentence? Temporary sanity? Happiness at playing in what basically is a championship game? I said this last season, but I hope it’s a sign of things to come. 7.5

Milito: A long time ago, I made mention at how impressed I was with Milito’s work ethic and his ability to run at the opponent almost all game long with a real need to score. He’s a great center forward and not for the first time, he strongly reminds me of a slightly younger Pippo Inzaghi. I should say that Miltio reminds me of a young Pippo who can run, pass and play defence. In this game, Milito tried, tried and tried to score and when he couldn’t he didn’t hang his head and check out of the game as some of the other strikers he have had on this team in the past have done. He came back and buried a nice goal when it counted. 8.0 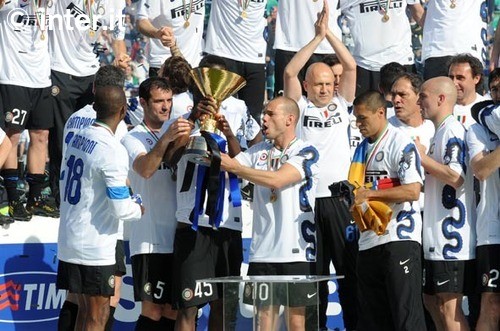 In a lot of ways this game resembled the Parma game from 2 years ago. Roma were the temporary champs coming out of halftime. We were playing a nervy game in which we had chances but weren’t able to find the net. In the second half we turned it around, had an emotional celebration and the team we beat ended up in Serie B.

They both felt incredibly good, especially coming off of the championship last season where it seemed like we became champs because others were unable to stay with us over the course of an entire season.

The game itself wasn’t that remarkable. Siena played a similar game to what we have witnessed on the road a lot this season. When we were on the attack they packed the final third so that it was hard to make passes into the area. They went on the counter attack when they could and we tried to tire out their attackers every chance we could so that the counter might slow down a little. 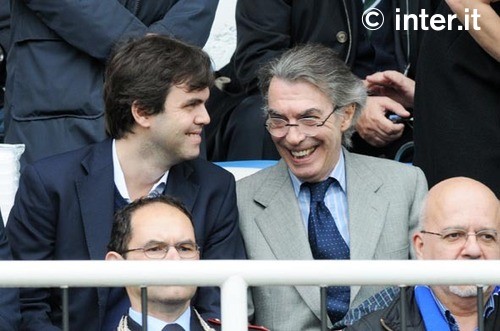 The Current and Future President

Milito’s goal was a well taken one and he was well served by our leader and Captain making the type of run forward that he is famous for. Javier made two or three runs forward, taking advantage of space that Siena surrendered to him, before switching to the midfield in yet another midgame formation shift.

Siena, for their part, were scrappy and were praised by the Roma supporters as professional. It may well be that they were professional, but it was a little out of character for those who have followed Italian football for a while. Teams with nothing to play for usually play like it… unless there is a good reason for it. Like a close personal and professional relationship with the team that would benefit from a hard playing Siena. Roma like to use Siena to groom their youngsters who are too old for the primavera team and not good enough to play in Roma. Plus, the owner of Siena is a Roma supporter who was at one time thought to buy the team from the Sensi’s.

The Roma youth members were easy to point out as they were the ones who fought the hardest and in the case of Rosi, he thought that he would continue the “interesting tactics” of the parent club that were on display during the Coppa. I thought it was amusing to see him try that stuff on a cagey vet like Stankovic who made sure that the extra curricular stuff were seen by the ref and forced him to make a decision on whether to make a call or not. Deki was able to do this without losing his cool, ensuring that the more important objective of winning the game and the title was met rather than settling scores. I would be willing to bet that Deki and others, like Javier who also got fouled hard, remembers him for future reference, assuming he escapes Serie B. 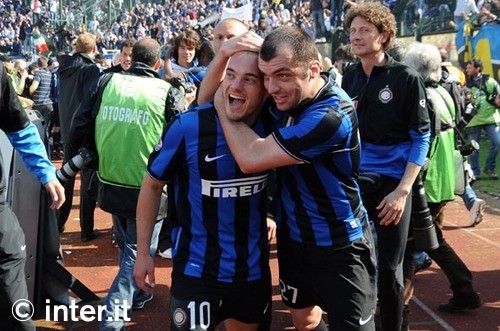 Key Signings Made A Huge Difference This Season

Anyway, there was some furor over the fact that Roma were getting help from their business partners and their reserve cache of players to take yet another chance to knock Inter down in totally legal but ethically meh means. In other words, there were some that thought that Siena was playing for Roma’s benefit, instead of for their own. And they were right. Personally, I didn’t care too much though since it looked like all the good guys knew what was up. I will however be watching the transfers into Siena though and see how many players Roma make available in co-own or loans for a quick return. It’s always interesting to see how these things really work.

So where do we go from here? 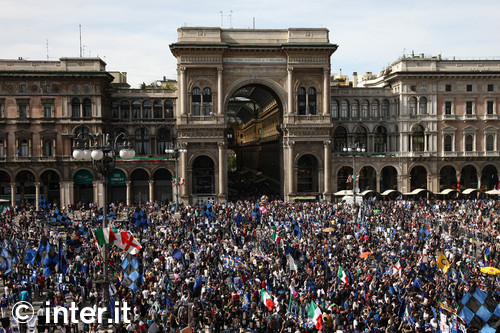 Well the team will likely take a day or two off and then resume preparations for the Champions League Final. Many, including me at times, have said that the Coppa Italia is something of a worthless title. And this is true generally speaking, but only because generally no one really tries for it. I thought that this season there were two teams who really wanted it – although I would say that there was a clear third place priority given it by the Mourinho and Moratti team. 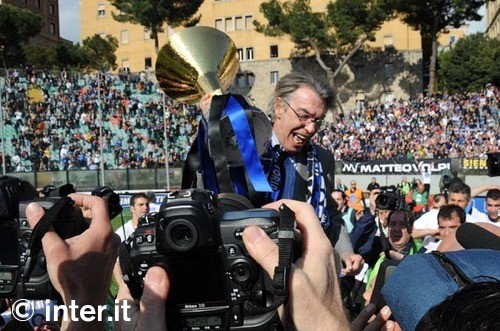 But cycles don't last forever and we need to take advantage of our good fortune when we can. So that means that in less than a week we will be girding stuff so that we can go out and play for another cup, another honor for the club. I will be rooting for this cup for several reasons. One is that I like to see my club win, no matter the circumstance. Another is that I know that it’s a rare honor for this club to win… we only have 2 of them and we have gone to the finals twice more after that.

But ultimately I will be watching because this will be the last time that I will see this collection of players compete with this degree of concentration, grit, heart and focus. Even if everyone returns next season, even if the World Cup doesn’t suck the energy and health of our boys, even if Mourinho shows unusually good sense and comes back again and even if we get all the trophies next season that we win this season… it won’t be the same. This has been a unique season following Inter for me – in large part for the amazing team but also for reasons not entirely surrounding sport. And I don’t think that I will ever see its like again in emotional depth, heartache, anxiety, joy and meaning. 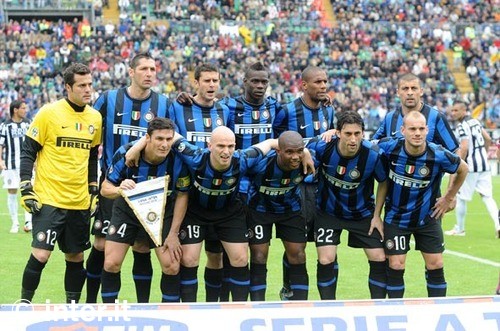