Share All sharing options for: Vamos A Madrid: CL Final -3 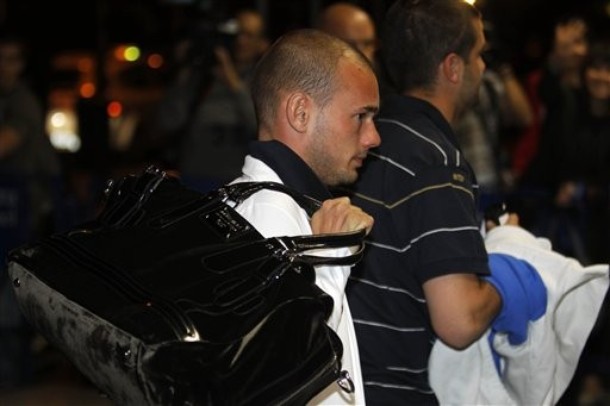 Well, thanks to that pesky Icelandic volcano, the whole team has gone to Madrid today rather than wait and risk a bus/train trip. Mourinho has taken the whole team, injured, youth, suspended, and all. I love it when he does this - hopefully this time no one had to cry to get a plane ticket. In addition to the early departure, Mourinho opened the doors to La Pinetina for training yesterday; he even had a press conference! Boy, have I missed those. All that and a few tasty tidbits after the jump. 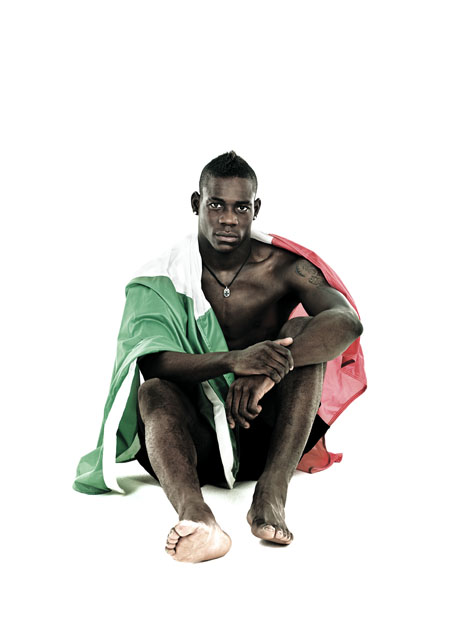 I just love this image of him draped in the Italian flag.

Mourinho is not the only one talking to the press,though. Mario Balotelli is the cover boy for this month's Italian Vanity Fair. I haven't been able to get my hands on a copy of the magazine (yet), but the interview is exerpt on VanityFair.it so I can at least read some of it. There were some interesting little tidbits:

When did you know that it was truly possible for you to [become a football player]?
"When I scored two goals at Juventus in the Coppa Italia."

He also spoke quite candidly about his lack of control on the field. When asked point blank why he was not always controlled, he said: "I am a kid, not a gentleman" («Sono un ragazzo, non sono un signore».)

Simple, but true. He went on to point out that while he may let loose with a "vaffa" now and then, he has never physically lost control - he has never hurt anybody or reacted physically to provocation (unlike some others we could name). And, as many of us suspected over the year, Balotelli admitted that the one person learned the most from was Ibra. And you can see it on him as well. What he failed to learn from Ibra, though, was that arrogance only works if you have the skills to back it up - potential is not enough.

Oh, and bonus - a little behind the scene video:

As I said, Mourinho had a press conference yesterday, and, even better, Inter put the whole thing up on Youtube... all 48 minutes of it! Better yet, for the English speakers out there, all his answers were translated for the press (the ones he didn't answer in English, that is).

So I know someone already brought this up in the comment thread, but if Zanetti plays against Bayern (and why wouldn't he), it will be his 700th competitive game with Inter. This is a huge milestone, and one that very few players make in this day and age. The fact that he has no chance of lifting the World Cup this year makes the Champions League all the more important for him. It also makes me want it all the more. 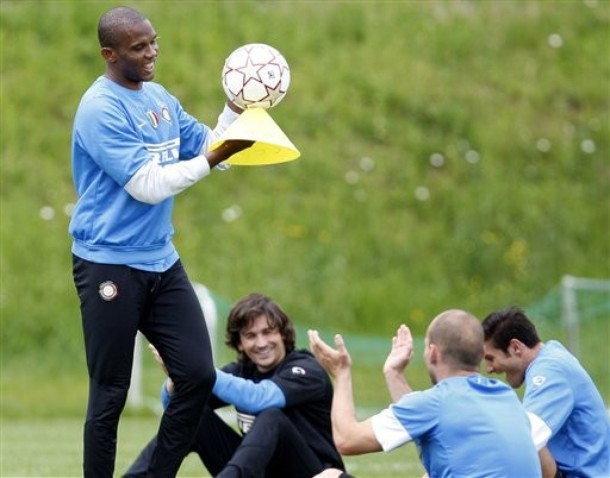 Also, our very own Eto'o is up for some old-guy's award called the Golden Foot. He is up against some stiff competition (including Golden Balls himself) so go on over and show your support by voting for him here. Wow, he does have a list of honors as long as your arm!

As for the impending silly season, all the rumors so far have been too distressing to even joke about (Cavani to Inter - why? Mihajlovic as coach - kill me now). I think I will ignore them all until after the CL final and I have no other choice.